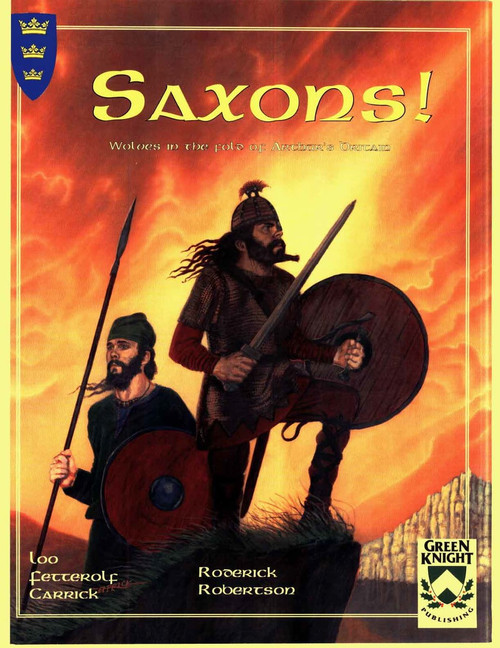 Wolves in the Fold of Arthur's Britain

The definitive roleplaying sourcebook on the advent of the Angles, Saxon and Jutes in Britain!

The Romans fortified the southeast coast of Britain and called it "the Saxon Shore" to defend against the piracy of these wolves of the sea.

But after the Roman legions left, the tyrant King Vortigern invited them into Britain as mercenaries to fight his enemies. Ambitious and treacherous, they seized Vortigern as a hostage and slaughtered his nobles at Stonehenge during the "Night of the Long Knives." Now, forced forever from their homelands on the Continent, the Saxons are in Britain to stay. Some work for peace. Most others for war. Not even the combined armies of King Arthur can eradicate them, though their power will be broken for a generation after the epochal Battle of Badon.

This is the story of the rise to power of the proud and energetic Germanic peoples who rule the south and east coasts and renamed their new domain "England."

Saxons! is a supplement for the King Arthur Pendragon™ roleplaying game, describing the Germanic invaders of Britain. It provides the history, heroes and culture of the Saxons, Angles, and Jutes, plus rules for Saxon character creation and magic.

The full 70-year campaign begins in 449 AD with the advent of he Saxons in Britain and culminates at the Battle of Badon in 518 AD. Discover the detailed geography and politics of the "Saxon Shore" area -- Essex, Kent, Sussex and Wessex -- described with extensive maps and notes.

Tales of Chivalry and Romance - PDF