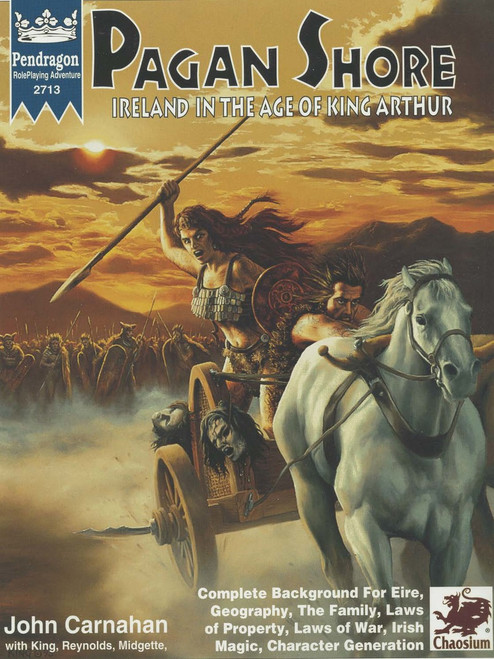 Ireland in the Age of King Arthur

The Irish call their homeland "...ire", "Banba", or "Fodhla," after three goddesses known to early settlers In Ireland, the Old Gods still live. The hills they own are as well-known as the raths belonging to human kings.

Druids wield real power in Ireland. They oversee the rituals and ceremonies to which all Irish look for their livelihood: the rituals of harvest, ceremonies of birth and death. They wield power over kings and battles, with the ability to geas nobility and halt warefare, like sacred referees.

They are greatly respected and greatly feared. Without the druids to direct and administer it, there would be no celtic culture.

Pagan Shore is a supplement for King Arthur Pendragon describing Ireland as it might have existed in the time of King Arthur. This book includes notes on generating Irish characters, a survey of Irish customs, and an atlas of Ireland's kingdoms. King Arthur Pendragon Gamemasters can use this place as a frontier in Arthur's empire or as the focus of the story with Britain on the periphery. Instead of servinq the hiqh-kinq, characters from an Irish clan can struggle to become high-king.