Take a look at our Getting Started with Online Play for Pendragon!

“In the past, I have designed or co-designed seven published roleplaying games, five published board games, and one computer game, as well as innumerable supplements, adventures, and scenarios, and without a doubt King Arthur Pendragon is my favorite. I consider it my masterpiece.” —Greg Stafford.

King Arthur Pendragon is one of the most influential roleplaying games of all time.

A Game of Knights

“I love the setting of medieval reality and its brutal, gritty realism, the struggle between life and death. Though many games are tilted towards player-character ease, I feel that making it too easy dilutes the emotional impact of play. I wanted players to feel as worried about their characters as the characters themselves would. Since the perfection of Arthurian ideals is offset by this danger, I wanted to make a game that walked the fine line between lethal reality and the idealism of a visionary life dedicated to the highest ideals and values. This theme is the key to the Arthurian legends.” —Greg Stafford

King Arthur Pendragon is a pen-and-paper roleplaying game. To play, you take on the role of a knight who goes on adventures with other knights in the world of King Arthur. The Gamemaster narrates what happens, you play your knight-character, and your friends play other knights—boon companions to your character. Over the course of play, they grow older, raise families, and strive to leave behind a legacy of heroism and honor, expressed as their Glory score.

Along the way, their courtly skills and battle prowess are challenged by ambitious and less scrupulous knights, a host of medieval monsters, and, of course, the relentless Saxons, who seek to bring all of Britain under their dominion. Eventually they die, leaving their legacies to be carried on by their offspring. In the longest campaigns, you will eventually play the grandchildren of your original character!

What Manner of Knight Are You?

“All player-characters are knights, but the real issue is: what kind of knight do you want to be?” —Greg Stafford

The game truly shines in how it captures the inner workings of the player-character by providing simple rules for roleplaying consistently while allowing for personal growth and evolution over time. With the game’s system of Traits and Passions, we find the volatile combination of emotion and logic, of ideals and practicality, of individual and family, of planning and chance, of life and death—all played out by the combination of player and character.

“Primarily, I was bringing together two things: the feeling of Arthurian legend and lore, and the mechanics of the game. I wanted King Arthur Pendragon to be such a device that the feeling was inseparable from the mechanics, so I endeavored to pour the utmost of my feelings and the perfection of my best mechanical logic into one form.” —Greg Stafford

The mechanics of King Arthur Pendragon are based upon the Basic Roleplaying system found in Call of Cthulhu, RuneQuest, and other games. The key difference is that Pendragon uses a twenty-sided die (D20) instead of a percentile for most resolutions. Damage is rolled using six-sided dice—sometimes great handfuls of them, a truly satisfying experience if your character is the one dishing out the damage, and truly terrifying if you’re on the receiving end.

The core mechanic requires the player to roll equal to or under the value of their statistic being tested, be it Trait, Passion, Skill, or Attribute. Rolling exactly equal to the value is a critical success. If your roll is opposed, as in combat, you must also beat your opponent’s roll. Passions make it possible to raise your target value above 20, enabling your character to undertake nearly-superhuman feats of heroism!

Kenneth Hite has compared this monumental book to The Idylls of the King and the Nibelungenlied, calling it the “single greatest narrative work" in the annals of roleplaying games. The massive tome provides adventures and background material spanning 81 years of game time. All the major story beats of the Arthurian tradition are here, from the rise of King Uther to the Fall of Camelot. 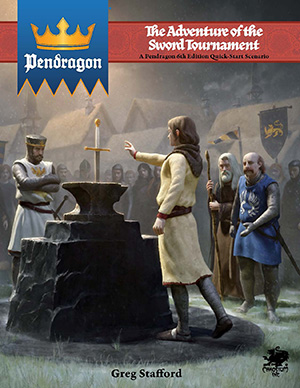 The Pendragon Quick-Start contains all you need to start playing knights in minutes!

It introduces the upcoming 6th Edition but is useful for playing any earlier edition as well.