I live in Melbourne, Australia with Mark Morrison, and have a day job, but I also work with Campaign Coins (Treasure Worthy of Your Greatest Adventures!) and write.

I started roleplaying in my teens. I love the ability of RPGs to tell a communal story and conjure up worlds with words. I also love board games, although I am terrible with rules. Over the last few years, we have been working our way through Guillotine Games’ Zombicide Black Plague in all its incarnations.

Melbourne hosts a local roleplaying convention, Arcanacon. Being in Australia, we never had the big companies at hand to run branded roleplaying competitions, so we fans wrote and ran them ourselves. This bred a big creative writing roleplaying scene, and we wrote RuneQuest and then Call of Cthulhu scenarios. Our Call of Cthulhu scenarios from that time were written as part of a large and loosely adhering collective of insane creatives that we dubbed the “Cthulhu Conglomerate.” Working in this scene gave us the skills to write kickass scenarios, so when the opportunity came it seemed a natural progression to step up and write for Chaosium.

The first roleplaying games I worked on were the Arcarnacon Runequest scenarios. Kree Mountain probably was the first big one, and then we (the Cthulhu Conglomerate) wrote and ran a number of Cthulhu scenarios. This led to working with Lynn Willis on the Australian Call of Cthulhu sourcebook Terror Australis (1987), and then Horror on the Orient Express, the biggest thing I’ve ever worked on (twice—once for the 1991 edition and then a substantial revision for 2014 edition).

Over the last few years, I’ve finally been able to use my deep and abiding love for Victorian and Edwardian era ghost stories to create The Curse of Seven, a Gaslight campaign for Chaosium with a splendid group of co-authors. I’m also having enormous fun writing new short stories of The Three Dungeoneers.

The most challenging gaming products I’ve worked on are the ones that never saw the light of day—these were in the video gaming industry. On the plus side, I got paid! In the end, you take what you’ve learned and move on.

The Three Dungeoneers project has been a challenge of a different kind as I had to learn the ways of e-publishing and I am easily flustered by technology. I am still amazed that I’ve been able to achieve publication with only several minor nervous breakdowns and some sustained bouts of swearing at the stupid computer! 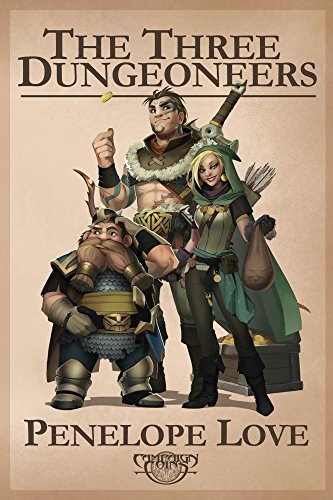 That would be The Three Dungeoneers. They started as the original Campaign Coins mascots, imagined by Andre Bishop and drawn by Lee Smith: a dwarf, a half-elf, and a barbarian. When we asked Lynda Mills to update their look, we thought it would be fun to endow them with names—Dhum, Avariss, and Hazzard—then personalities, and then the trio took off on their own adventures. These are fantasy comedy short stories with a meta-roleplaying idea behind them, that the Dungeon Master is trying to create a serious world with serious problems, but the players are just idiots—so just like every single D&D campaign anyone has ever played. And being Campaigns Coins, we wanted the stories to be fiscally-related. So, the trio are great at fighting but terrible at financial planning, and always end up broke. I’m now working on The Other Dungeoneers, a follow-up collection of stories.

8. Just how large is your dice and/or stationery collection?

I am happy to use the house dice when we play, but I have a carefully curated special selection of two (2) D6s. One is a metal Q-Workshop Tech Die that reminds me of a Companion Cube from the Portal game. I loved that Companion Cube. The second is a Chessex die where instead of a 1 there is a neatly printed “Bollocks.”

Cobs sweet and salty popcorn. This stuff is sweet AND salty and doesn’t make your games kit sticky.

We’ve played board games in Iceland and Malaysia. We played Lords of the North Sea in Reykjavik, with our fellow Chaosium writers Pedro Ziviani and Heidveig. It was also a thrill to watch the penultimate episode of Season 7 of Game of Thrones there, as it was entirely shot in Iceland. Iceland is rich in in its own Viking history yet everywhere we went, happy nerds were playing out their favourite GoT scene. (Okay, we had our own GoT moment at the farmhouse at Stong.) In Penang, we played Carcassonne and aligned our qi in the courtyard of the old Blue House.

PENELOPE LOVE is a writer who lives in Melbourne, Australia, with fellow writer and editor Mark Morrison. Together they have edited, written, or otherwise contributed to many Chaosium publications for Call of Cthulhu, including the sourcebook Terror Australis and the campaign, Horror on the Orient Express. Penny has also written a fair swag of short stories for both Chaosium and Golden Goblin Press, and contributed to numerous Australian fantasy and horror short story collections. A recent story, “Turn Out the Light,” appeared in She Walks in Shadows from Innsmouth Free Press (republished in the US as Cthulhu's Daughters). She Walks in Shadows won the 2017 World Fantasy Award, Anthology category, and was a finalist in the Locus Poll, Best Anthology 2017. My story is available as a free sample: http://www.innsmouthfreepress.com/blog/available-now/she-walks-in-shadows/