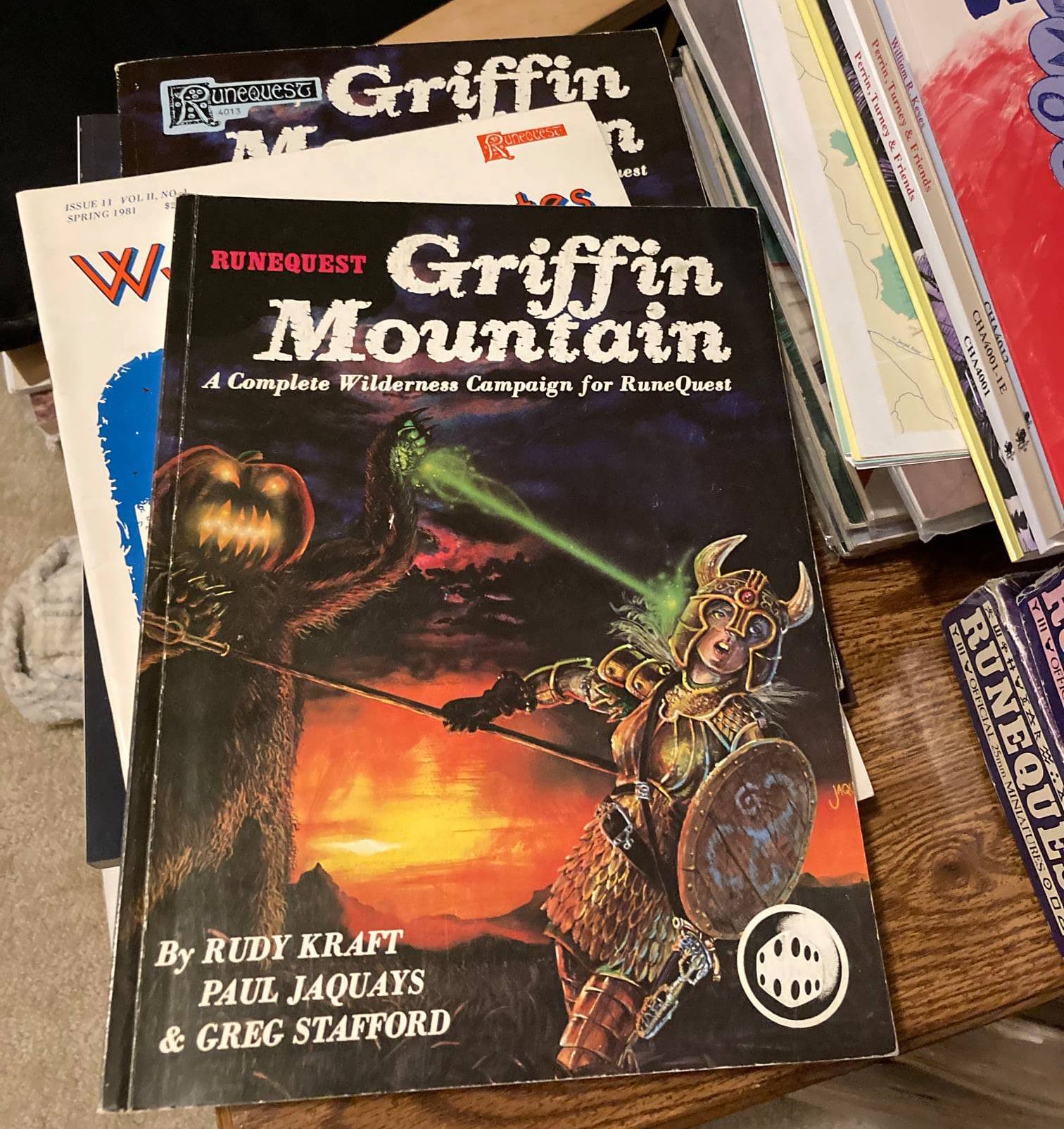 'Out of the Suitcase' is a new regular series of posts from Chaosium President Rick Meints. An avid RPG collector, his love of all of Chaosium's publications, plus anything Gloranthan or RuneQuest in nature, has earned him the nickname "Mr. Suitcase".

Jack O'Bears and me. I saw a gaming post about a topic that hits very close to home. As always, I ask your indulgence. This is a geeky gaming story. It's been a part of my roleplaying life, and for a very long time.

Jack O'Bears have been a part of my Gloranthan gaming experience from almost the very beginning. They were in the RuneQuest 1st Edition rulebook (page 79) in 1978, but I did not meet them in play until late 1981.

Jack O'Bears were featured in Griffin Mountain (1981), out in the Elder Wilds north of Balazar. Tim Webster was our Game Master. Tom Webster, Brian Smith and I entered a gaming world we could only barely imagine. I was woefully unprepared. As our caravan ventured north, Jack O'Bears almost killed our entire party. Despite their and Gondo Holst's best efforts, I should have heeded the earlier warning displayed a few months prior on the cover of Wyrm's Footnotes #11 (Spring 1981) when I saw it in a local game store (but wouldn't pay $2.25 to buy it).

That enemy was a long time in the making. I had no idea that Jack O'Bears pre-dated RuneQuest until Greg Stafford revealed their origins to me.

Greg very much wanted to have a miniatures line to support his RPG. Archive Miniatures, run by the mad wizard sculptor that is Neville Stocken, offered Greg an easy "hit the ground running" solution. If Greg wrote up some of the existing Archive minis as Gloranthan creatures, then they were ready to sell immediately. Thus, Archive's bugbear miniature became immortalized as a Gloranthan Jack O'Bear.

I only encountered them that one time in Griffin Mountain, but the unique monstrosity that they are has cast a long shadow over my life ever since.

When I moved to the UK in 1995 I soon found out that Games Workshop had published the Griffin Mountain book with a slightly different cover. Being a completist collector I added that Jack O'Bear to the top of my want list, and paid dearly for it at the auction at the Convulsion 1996 convention. First they tried to take my PC's life, and now they were picking my pocket.

Over the next several years I heard the lament of many RQ fans longing to play the Griffin Mountain campaign, but unable to pay a collector's price to have the pleasure of facing an elusive Jack O'Bear. Now those Jack O'Bears were taunting my fellow tribe members, and something had to be done.

In 2001 I had the immense pleasure of publishing Griffin Mountain as the 2nd volume of the Gloranthan Classics series. Dario's wonderful cover showed a Jack O'Bear in action against the caravan I was with back in the day. You might recognize my first employer, Joh in that scene, along with my first Troll friend XigXag.

As a married man I didn't expect to be staring a Jack O'Bear in the face again any time soon. I had young children, a wife, and a job on the road far different from an adventurer's path. My wife has always supported my "hobby", yet I didn't realize how much until she gifted me with Jennell Jaquay's original painting used for the cover of Griffin Mountain about 15 years ago. It sits on the wall of my office and it catches my wary eye every day. I take heed of the original caption at the bottom of the painting, which is "harmony at twilight". Some evil bides its time...

I don't know what my life would have been like without Jack O'Bears in it, and oddly enough I don't want to find out. 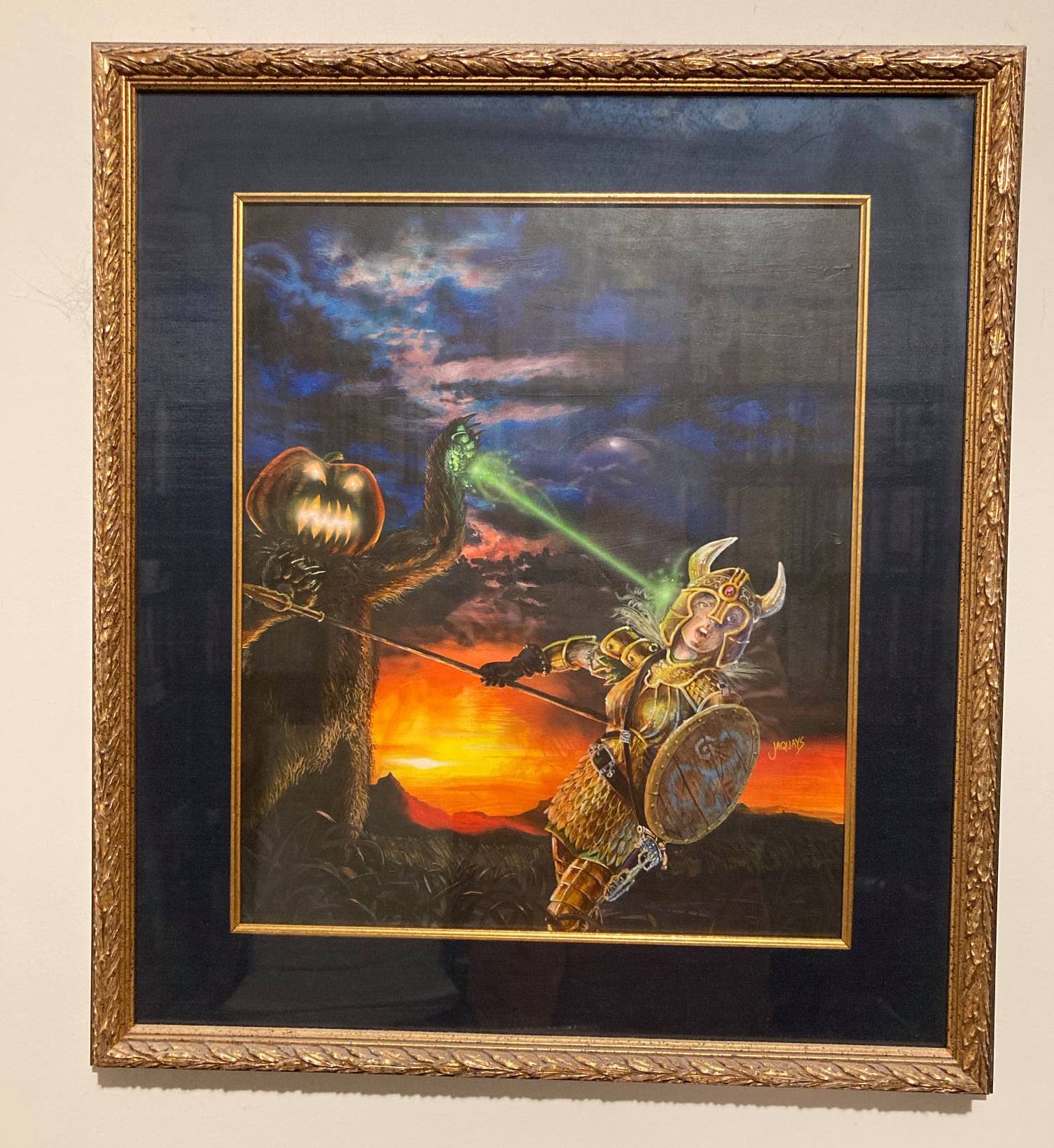 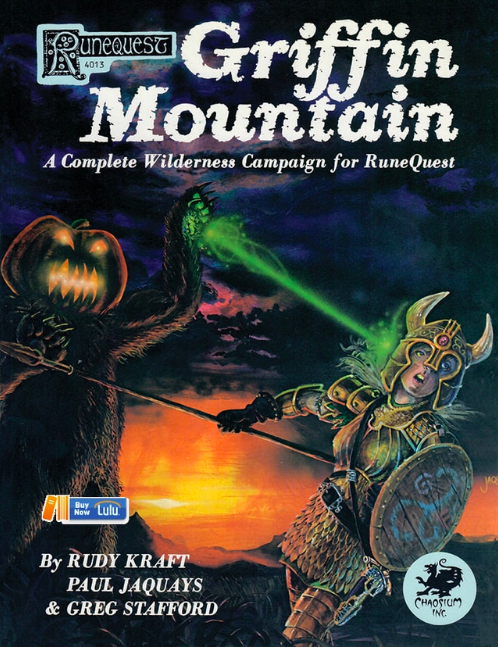