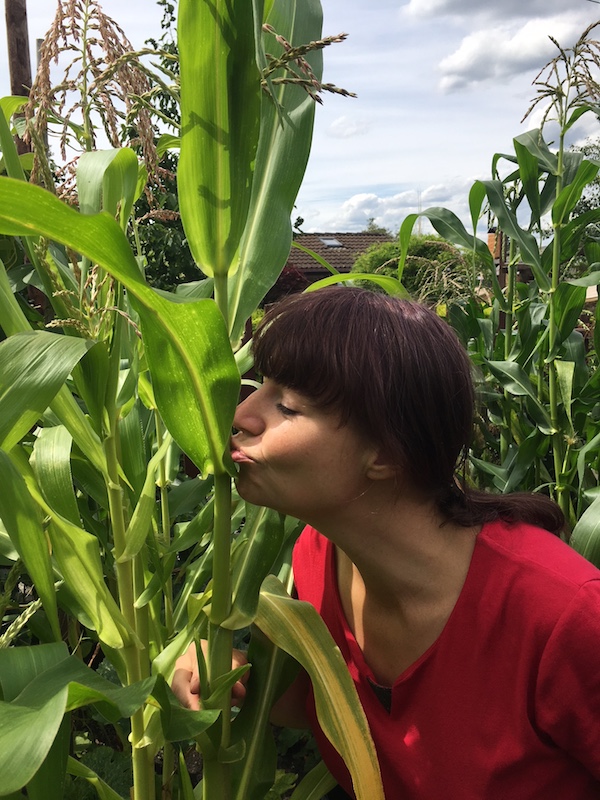 I’ve been a proper gamer girl for nearly 30 years now. I grew up playing board games and card games with my family, but I started roleplaying games at the age of 16. School friends introduced me to Das schwarze Auge (at that time, the most popular RPG in Germany). We played a lot after school and during weekends, trying many different gaming systems.

My boyfriend at that time took me to join his RuneQuest group back in 1992. This, and later Call of Cthulhu, became the systems I’ve played the most over the years.

I’ve been a regular at Essen Spiel since 1993—my “Board Game Heaven.” If you attend for such a long time, you get to know people, and several times I worked there for various companies as a games demonstrator. I also played Magic: The Gathering very intensely until 2006, even participating in a few Pro Tours.

During all of this, I met a lot of people, including various game designers, like Greg Stafford and Sandy Petersen, at the various conventions I was at—it’s a community where you get to know each other because you all attend the same events. 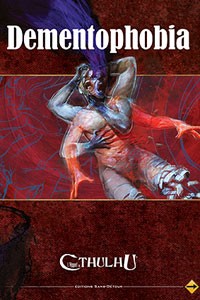 Years ago, I wrote some articles for a German gaming magazine (book reviews, game reviews etc.). I also did some work for Pegasus Spiele (including the Call of Cthulhu supplement Dementophobia).

I’m married to Jeff Richard of Chaosium, so I’m involved with a lot of Chaosium products—giving feedback, playtesting, writing sections, etc. I worked extensively on the Ernalda cult for RuneQuest to make it more attractive to play, and Yanioth is actually based on a character of mine.

In my opinion, Ernalda needed some “edges” or a few over the top things to be fun to play. My characters always walk around in the Minoan-style to remind people to be fertile. They are barefoot to always have a connection to the earth (and, if necessary, to get support and purchase in dangerous situations). They help pregnancies whenever they can, making the bellies of the pregnant women they encounter sparkle like gold. They call for the support of the gods with rituals containing—of course—nudity and sex, the use of hazia, and animal sacrifices. I love the Yanioth pictures in the new RuneQuest book, and I’m hoping in one of the next books there will be a picture of an Ernalda priestess with a more Rubenesque body—like the goddess statuettes you find from the Paleolithic to the Bronze Age (like the Venus of Willendorf or the mother goddess at Çatalhöyük).

I enjoy that games like Call of Cthulhu and RuneQuest play around with many different archetypes for women and I am a strong voice for making sure that it stays that way!

I just started my own project: my Gloranthan cookbook. Jeff and I had the idea a while ago, but these ideas need some time to grow into real projects. I now have the structure in my mind and have started my research on historical recipes. (Thanks to Marcus Gavius Apicius, you can find a lot of Roman recipes, but books about Bronze Age cooking are not that common.) I already have the first recipes I tried and tweaked that will make it into the book, like fermented blackberry leaf tea or grilled chicken hearts (sadly no grilled mock pork yet!). But so far, I mainly loot Jeff’s sources (or use Jeff as a source) to put together what exactly is farmed, herded, hunted, or gathered in the different regions of Glorantha as a basis for “realistic” dishes. I hope to add all this information into the cookbook, too, as my goal is to create a culinary journey through Glorantha—not only for the belly but also for the (gamer) mind.

I have more projects in mind, like an art book about the genesis of art pieces and a book about how to run RPGs for younger kids. I regularly run games for kids at conventions. My last one was a very light Hero Quest variant which worked very well—the kids went into the Big Rubble fighting Trolls for the Sun Domers. I have a lot of ideas—if I can only find the time! 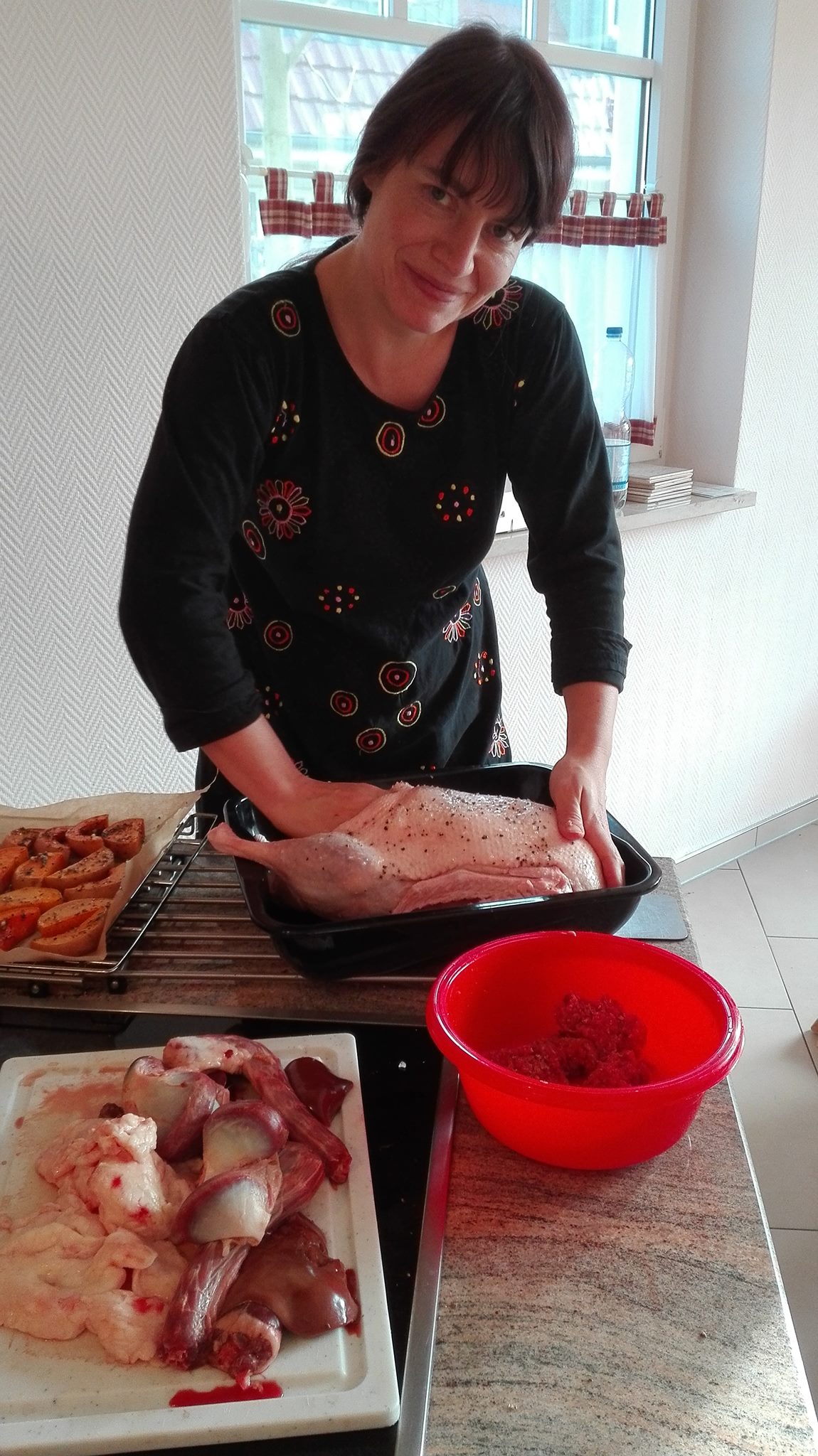 My current cookbook project is very challenging due to its complexity. The writing part is the easiest. What is complicated is to think about which ingredients are available in a region, what fits the culture/daily life, and what could be so special that it qualifies as a god sacrifice and feast dish.

You have to try things out and make sure you write it down somewhere safe—one of the recipes I liked is already lost because our cat spilled a glass of water over my handwritten notes and I cannot remember the details anymore. You have to find other people willing to try your written recipes to see if they can follow them. You have to get hold of rare things, like Einkorn (a type of wheat) and mill them (I tried this with my daughter—even with our hand-mill it took forever to get 200g of flour out of the grain). I collect wild leaves and flowers to try out historical recipes, but you can only do this when they are in season.

It took me some time to find a place selling archaic seeds of breeds that are no longer widely used and are in danger of disappearing entirely, including beans, salad leaves, tomatoes, spinach variants, and so on. I planted a bunch of them in our little garden and I’m currently waiting for them to grow and be ready for my recipes. I also have to get a feeling of which ingredients you can combine because they are in season at the same time, and when I have to use dried or fermented goods (because there aren’t refrigerators or freezers in the setting). I just dried some redcurrant berries and sour cherries to have them available for cooking later. Of course, I plan to provide ideas for substituting things when they are not available—it is sometimes difficult to get the bones for dinosaur bone broth!

A very different question is art in the book: in a cookbook, you want to have a color picture of the final dish. But I don’t think this would fit—after all, there are no cameras in Glorantha! I bounced some ideas around with Kalin Kadiev at the last convention we were at as to what we could do instead.

One other important question is how to integrate the gaming aspect? Is there a necessity and a place for stats? What about adventure ideas? This project has a very different dynamic you can only partially influence, and different challenges compared to the other gaming books I’ve participated in so far. On the other hand, I’ve learned a lot about agriculture and archaic seeds, got back a better feeling which fruits and vegetables grow when, and which parts of a pig, a cow, or a chicken make good eating. Due to this project, I grow more of our own foods (I’ve already found a few treasures I will definitely put into our little garden again), we buy weird ingredients, try to make flat bread on a grill, and cook crazy dishes.

The dice are not the problem—it is Jeff’s RPG collection and my board game collection. Even worse, we keep receiving awesome dice from Q-Workshop, which means it just grows and grows. We live in the middle of Berlin in a regular apartment with two little kids, and there is never enough space. It means you have to set priorities: we gave up our living room, which is now Jeff’s office (with all the gaming and resource books). We also separated off a third of our son’s room, which now hosts the board game collection. (He was not that happy about that!) 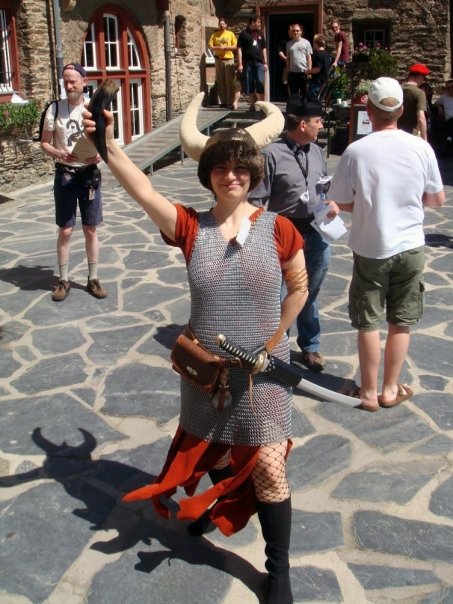 8. What is your favorite gaming snack?

9. What’s the most unusual/exotic location you’ve gamed in? Or that one of your games has been played in?

I live in Europe, so gaming in castles or old ruins happens surprisingly often. However, gaming in a full train is always fun. I’ve done this a few times; it makes trips enjoyable, and the faces of the other travelers are priceless. The most interesting thing is that in a good game, you really forget that you are surrounded by strangers!