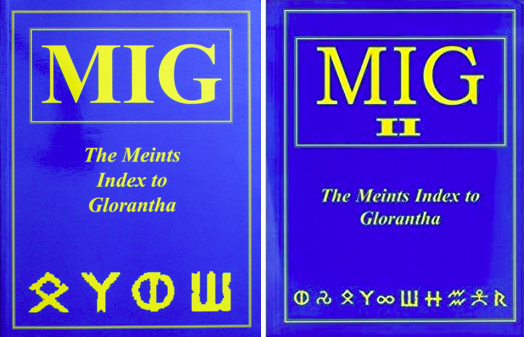 In 1999 the Reaching Moon Megacorp published the second edition of my book The Meints Index to Glorantha (MiG for short). The MiG included cover pictures and text descriptions for everything published for RuneQuest and/or Glorantha from 1975 to 1999.

I regret not adding to it every few months or years as new things came out, but I have slowly kept chipping away at adding to it over the last several years. But creating a new edition of my Index to Glorantha (MiG) means playing catch-up on the last 20 years or so of publications for RuneQuest & Glorantha. A plethora of wonderful publications have come out in the last two decades, plus I occasionally find something I missed from back in the day. 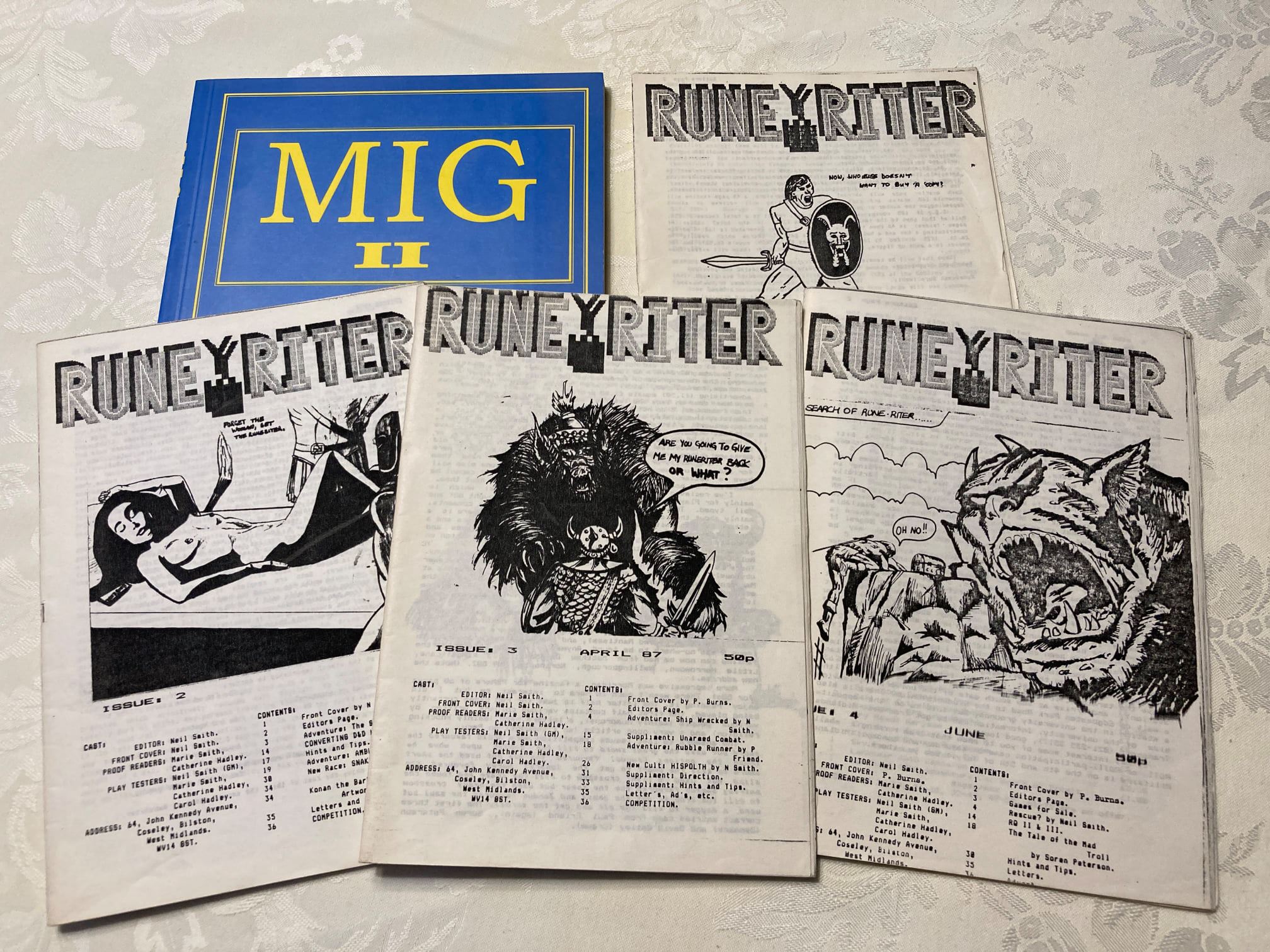 The MiG II went to the printers in early 1999, before I attended the Tentacles convention in Bacharach that spring. Thus, only the first Ye Booke of Tentacles (YBoT) made it into the book. Six of these convention fundraising books were published from 1999-2006. They are loaded with a variety of Chaosium game related articles, including RuneQuest, HeroQuest, Call of Cthulhu, Pendragon and Stormbringer. The contributors list is a veritable who's who of notable Chaosium-related personalities too lengthy to list here. It will be great to have the whole series of YBoT in the new edition.

Other things I have added are numerous fan publications by the Unspoken Word, the German-based Chaos Society, and more articles found in APA zines like the Wild Hunt and Alarums & Excursions. It's wonderful to revisit books that have been on my shelves for a while, especially the ones written by friends and colleagues, some of whom are sadly no longer with us.

Then there's Mongoose, who published over 75 RQ books between 2006 and 2011. Basically a book a month, for half a decade. This picture isn't even all of them as I struggled to keep up at the time. Being a completist worked against me since they did many of their titles in hardcover AND softcover... 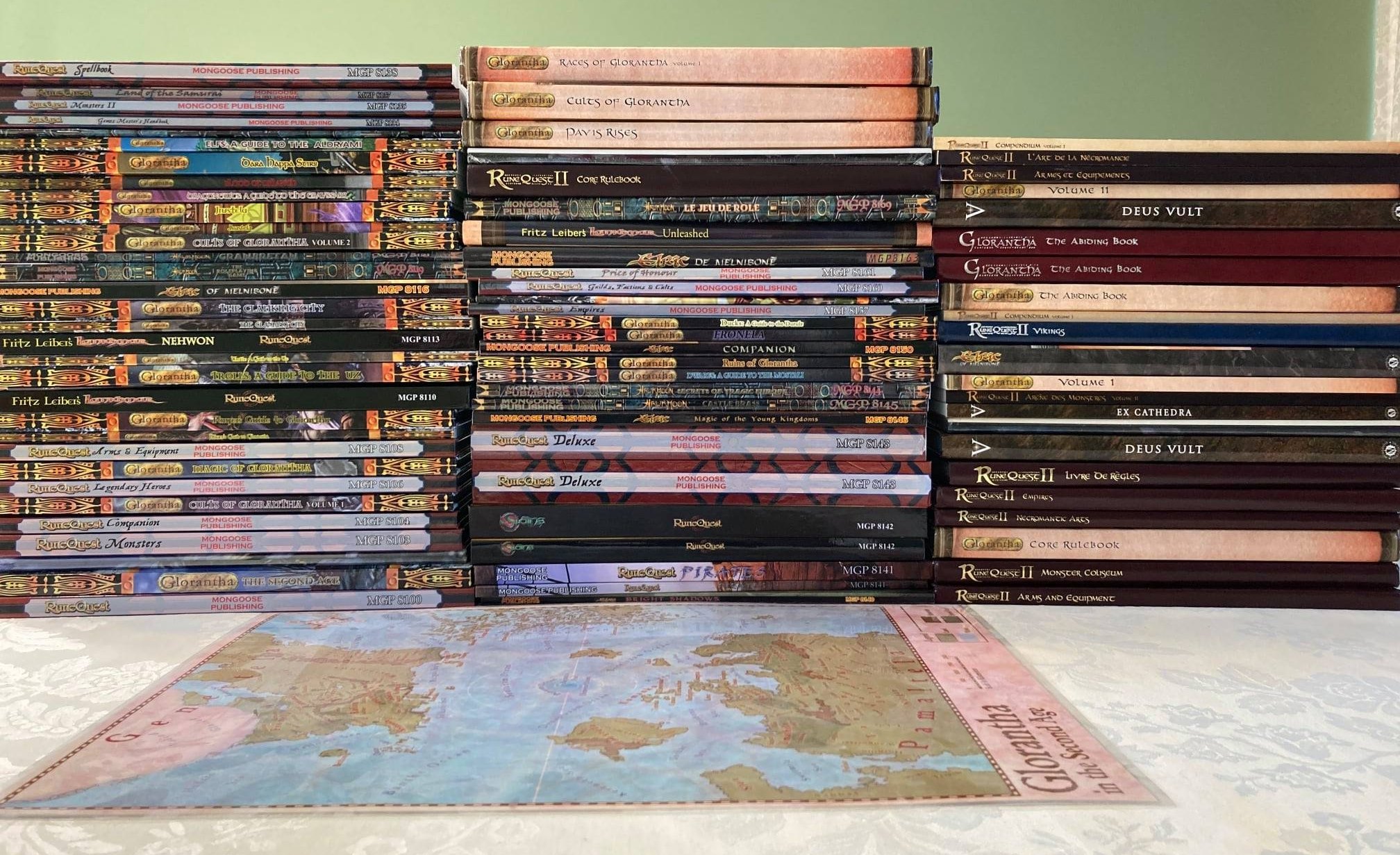 The MiG II was 124 pages. The MiG 3, which I am currently working on, is going to have a distinctly higher page count... As for getting it published, I'm thinking of starting with it in PDF form, and treating it as a living document for a while as I keep adding more entries. That way people can see what is in there, possibly point out what I have missed or suggest corrections to what I have written. It also means they can get an updated PDF as substantial new information is added. Once it has spanned most of what is out of print, we can then get it printed as a book.