As long-time fans of RuneQuest and the newly Glorantha-curious receive their RuneQuest: Roleplaying in Glorantha Slipcase Sets in the mail some have shared the excitement of opening their package in unboxing videos. Here's just a sample of them:

"It's already been a fun journey discovering this unique world" - A great unboxing video by RPG Imaginings, who has never played RuneQuest before and is looking at the release totally fresh:

Kenny Johnson is a big RuneQuest fan, and in his unboxing video he gives his reasons why players of other fantasy RPGs should give it a try:

Dungeon Musings gives a comprehensive look through the Slipcase and how the art and design hows show how  "different and vibrant" RuneQuest is as an RPG and Glorantha is as a setting:

Diana Probst is another big Glorantha fan and describes the new slipcase set as a "box-full of happiness":

And there are many more such unboxing videos already on YouTube! Meanwhile, here's some of what the critics have already said about the new RuneQuest: 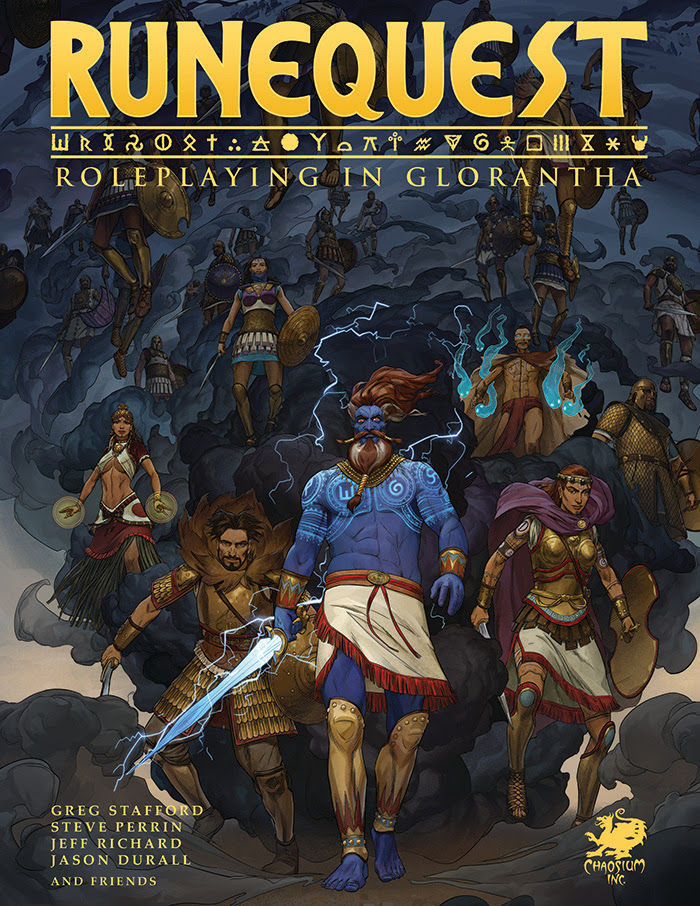 "In a market stuffed to the gills with fantasy RPGs, RuneQuest offers something a little different from the heroic norm – something a little deadlier, rooted in a time of bronze and barbarians, where historic realism mixes with raw, primitive magic that hangs in the air like early morning mist."— Tabletop Gaming review, Oct 2018 (nb #9 on their list of 150 Greatest Games of All Time)

"The Bestiary is a treasure, a masterfully illustrated and produced tome that far and away surpasses any other monster guides we have seen for Glorantha… the most definitive and comprehensive look yet at Glorantha’s non-human cast of characters to date."— Andrew Logan Montgomery, Exploring the Otherworlds of Fiction, Magic, and Gaming.

"STYLE: 5. The revitalized Chaosium has been putting out some dazzling books, and this one is no exception - especially with the vivid and loving renditions of the various beasties and beings. SUBSTANCE: 5. Not just a compendium of creatures, but an indispensable companion, steeped in Gloranthan lore and thoroughly inspirational."—Paul StJohn Mackintosh review, RPGNet. 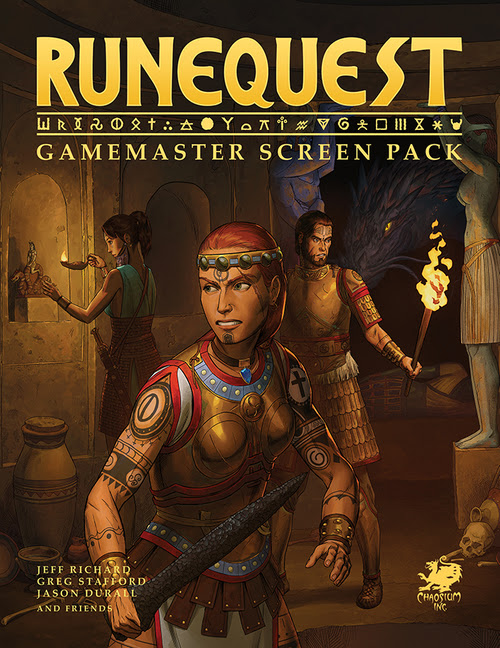 "If I have a chief complaint with the new RuneQuest GameMaster Screen Pack, it's that it is a very badly named product. Yes, there is a gorgeous gamemaster screen in there, 20 pages of handy reference sheets, sumptuous character sheets, tons of maps, and even a calendar... but what the team have really given us here is a living, breathing culture. The component they humbly refer to as a "booklet" is in fact a 128-page book detailing the lands and peoples of the Colymar tribe. It easily could have been sold separately from the "Screen Pack," but Chaosium has never been big on half measures."—Andrew Logan Montgomery, Exploring the Otherworlds of Fiction, Magic, and Gaming.