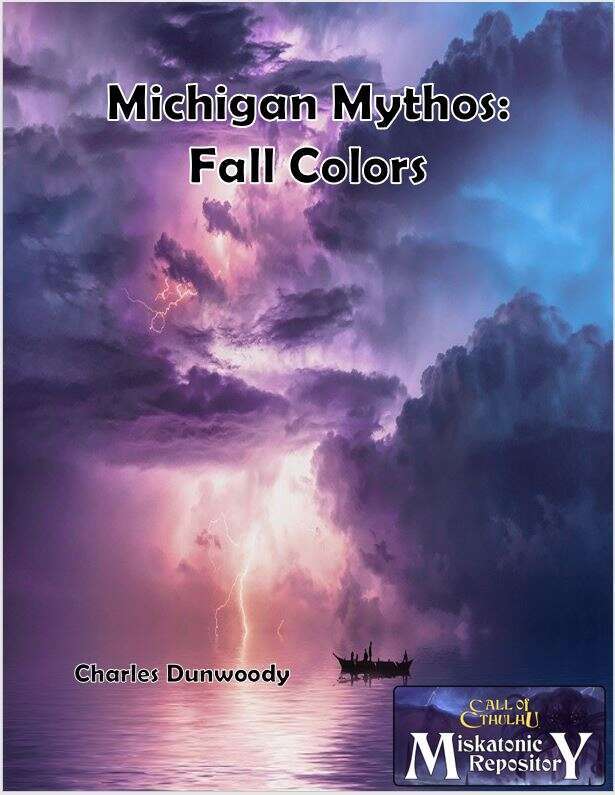 This has been a bumper month for the Miskatonic Repository following the Storytelling Collective's Write Your First Adventure workshop, with its dedicated Call of Cthulhu path by co-author of Call of Cthulhu 7th edition Paul Fricker. Congratulations to everyone who has published fo the first time, we're proud of you!

In 1935, the Civilian Conservation Corps built the beach house for Ludington State Park in the state of Michigan. In this adventure, the beach house may never get built if the heroes don’t act to stop a threat to the workers and to the local waters. Heroes will investigate a beach house on Lake Michigan, travel up the Sable River, and explore the ruins around Hamlin Lake as fall colors surround them. This Pulp Cthulhu adventure is for up to six heroes plus the Keeper.

The investigators are hired to sail a dilapidated steamer up the majestic Congo river, deep into the jungle. Their task is simple, retrieve a sick company agent and bring him safely back. While there make sure his valuable shipments of company goods continue to flow. As for some of those rumours, just ignore them.

Kingsport, June, 1933. The heroes are contacted by Old Cobb, a fisherman who claims to have found a waterlogged diary on a boat adrift at sea. The diary is from Howard Winchester, a well-known explorer and friend of the heroes, and describes the discovery of a mysterious island connected to a pirate known as John “Black Teeth” Keetes and a cache of South American gold. The last entry hints that Howard may be trapped on the island. Off to rescue their friend and find the pirate treasure, the heroes discover strange statues, crazed survivors, and a pirate cove that holds the real secret behind the island, and why it should never have been found in the first place…

A Pulp Cthulhu adventure set in the 1930s, and can be played as a one-shot or integrated into an existing campaign.

What connects a fire at St Michael At The North Gate Church,
a series of missing books and The Order of the Green Gate?
Visit Oxford, England in 1953 and help uncover the truth.

Set in Oxford, England in 1953 the adventure leans more towards the 1920s than Modern from an Era perspective. The investigators are summoned to All Souls College to help an old friend or colleague in solving a confusing mystery.

A recently passed friend is accused of murder... after he died.

A letter from an inmate at HMP Dartmoor Prison, Devonshire, England. A request for your forgiveness in the final days of a man’s life in exchange for a substantial reward for your time. Is this too good to be true?

Looking for survival horror TTRPG like no other . . . look no further. Take your players into the infamous HMP Dartmoor Prison and watch them run, hide, and fight to survive. This 1920s scenario is designed specifically to build tension and suspense in your game leading to a climax that forces the investigators to make a decision that will live with them for the rest of their lives. However long that will be.

Taking place in the small north eastern university town of Maypool in the 1980s, this scenario tasks a group of Investigators with figuring out what is behind a rash of disappearances in this once sleepy town. In this journey they will uncover the truth behind a college professor's expedition to the Western Sahara, the artifact he retrieved, and the horrific fate that's befallen the abducted residents of Maypool as a result.

A matron weary of misbehaving children performs a dark ritual to control the orphans under her shelter. Her treasured music box, a family heirloom from a wealthier time, is touched by a wandering tendril of the great Azathoth’s sleeping mind. An unholy pact is formed.

Players enter the world of H. P. Lovecraft as orphans in an adventure against a malevolent matron and her cursed music box.

It is 1921, and you have recently been enrolled at Shaw University, a cloistered, and exclusive place of learning in the Boston area, with limited spaces, high standards, and ruthless competition among the students. Only one week in, and you are starting to feel the pressure to perform, with whispers of some pupils already being expelled. So you are delighted to be asked to attend and help Professor Goodfellow, he has a small matter of a murder for you to solve. Nothing a student of your caliber would balk at for some extra credit.

A 4 hour morally grey, investigation heavy scenario for 1-3 players, set during the 1920s.

It's December, and the snow and bodies are piling up. Keep your wits about you and you just might stay upright through Christmas. Find the killer, close the case. Couldn't be simpler.

Take on the roles of 1920's Chicago detectives investigating an unusual death in the Little Italy neighborhood. It's a tough time to be a copper, with Capone and his gang having the run of the town.

February 1992, the newly-independent country of Ukraine still has nuclear warheads on its territory, and now one has gone missing. An international group of intelligence officers and scientists must find the culprit, leading them into the dark and nightmarish world of the Chernobyl Exclusion Zone.

An obsessed writer was found dead at his desk in a house that has become a hub for rumors of paranormal activity. A decade later fans of his work, seeking a missing friend, enter the house, where the source of his obsession still remains. Will they brave the unknown to save their friend? Or will they seek out the madness at the heart of 16 Briarwood Court and risk themselves to the same obsession?

Janet Livingston was a student at Miskatonic University in Arkham, MA. She was a great student but has recently been missing class. Last week, she stopped communicating with her family entirely; in a blind panic her parents figured that she was missing yet they didn’t know where to turn. Massachusetts State Police and Miskatonic University Police were unable to help (Philip Livingston doesn’t want to risk press attention). But Janet isn’t the only one. People in New England are disappearing or cutting ties with their closest relations at seemingly random.

In this 1920s scenario, the investigators are tasked with figuring out what is happening; specifically, what happened to Janet Livingston.

Plus new releases in Japanese and Korean!