I trained as a primary school teacher, then as a ceramicist (potter - handiwork to the right!). I’ve since morphed into teaching Art and Art History at university level, as well as making pottery. At one time I taught Interactive Media, which came about because I’d completed post-grad studies in animation and interactive media, worked a couple of small industry jobs coding FLASH, had run my MUD DragonRealms, and could write a story.

I started playing D&D in 1981. I play Call of Cthulhu these days—in the middle of running Horror on the Orient Express. So, 37 years. I was given a copy of the rules by my Uncle who had seen it in a shop on a trip to the USA. He knew I was a writer (I wrote stories obsessively) and that the game was about telling stories. I was intrigued, couldn’t figure out how to play it, and went to a small shop not far from where I lived that sold board games to see if they could help. The guy who ran the shop put me in touch with a group of roleplayers who met every fortnight at a church hall (ironic given all the media hype about D&D, Satanism, and levitating a couple of years later!).

This was a long time ago now. In 1992, I found out about MUDs and, along with a friend, became obsessed. Wouldn’t it be amazing if we could make our own? My friend, Andrew South, is an extremely talented coder and he got hold of the DikuMUD software and started tweaking. I learned to code, too. My husband became an admin for the game we developed. Wouldn’t it be great if this could be visual as well as text, we dreamed. Naaaa, too system intensive, too graphics intensive, we laughed at the time. In 1992, we were struggling just to find someone who would host the software because of the resource drain of having dozens of players online at once. Internet providers would say “Sure, we can get you a server,” and then be screaming at us a few weeks later.

My first “product” was writing for Australian Conventions—Fantasticon, Arcanacon, (and let’s not forget the very tiny BigCon)—usually AD&D and Call of Cthulhu. In 1994, as MMORPG’s gained in popularity, I got together with a small group of friends to write, produce, and code DragonRealms. Did that for a few years, but with 400+ players it got very draining for a small team to cope with delivering new content and managing online behaviour. We closed in 1998.

I’ve just delivered a 1920s scenario for Chaosium for Call of Cthulhu. I was the writer. It’s for an upcoming scenario collection, but I don’t think I can say any more than that!

Anything running in real time with online players is challenging. There is 24-hour demand on your attention and a constant need for refreshed content. So, it doesn’t matter whether you’re admin or content producer, the workload never stops. And you have a persistent critical voice (the players) buzzing at you to do it better, do it faster. It’s hard, because you have to accept that you will never please all the people all the time.

But writing online content is also great, because you have players who passionately care about the product you’re producing. They’ll bounce great ideas off you. They’ll wait with bated breath for an area you’ve written to go live and then spend 24 hours straight demolishing it and having huge fun with their friends. They’ll jump onto your story arc and run with it and take it directions you never thought. And then you get to write some more!

Online players whine and bitch and moan and do your head in with their pettiness. And yet they are so creative, caring about the game-world, helpful to new players, devoted to your story writing, and supportive of your ideas: absolute love-hate relationship. When it’s good, it’s a joy to be a writer/producer/admin, but when it’s bad, it can be completely toxic and soul destroying.

I’ve had quite a long break from writing while completing a PhD and with young kids. They are teen and pre-teen now, need me less, and the PhD is well done and dusted. I’m enjoying returning to write for Chaosium because there is a great deal of freedom to toss ideas around. Mike Mason and Michael O’Brien couldn’t be more supportive (well, Michael could deliver chocolate from time to time when I have writer’s block.) I would say Call of Cthulhu is the most enjoyable. It’s satisfying to playtest a scenario I’ve written and seeing the looks of dawning understanding and horror on my investigators’ faces! 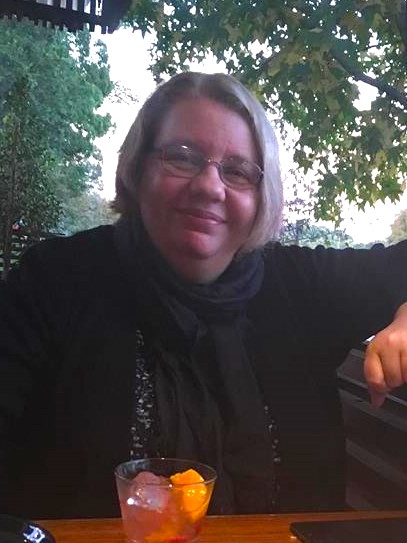 Not large at all. At the moment, I have two sets of Call of Cthulhu dice. Hubby (who’s worldly goods are of course also mine) has about 100!

Chocolate. Always chocolate. But not white. And not carob. Carob is not chocolate.

Has to be in the tower room of the Doncaster Pancake Parlour for the last, dramatic session of a long-time campaign. I was a player. The most fun location I’ve run a game was in a stairwell, with a single candle, a pack of matches, and four very jittery Investigators…