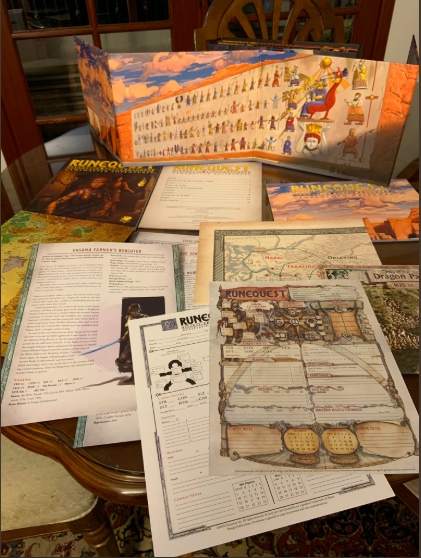 The new RuneQuest Slipcase Set has been out for a while - here are some notable first impressions...

"RuneQuest: Roleplaying in Glorantha subverts many of the tropes of both the fantasy and RPG genres. It makes you care about the world on a profoundly personal level. It makes you invest in your character's story so heavily that you don't want to risk their death. It evokes a sense of vulnerability that is reminiscent of Game of Thrones… It's absolutely one of the games you need to try."—Brian Holland, Good Games.

"The new edition is so beautiful. The Chaosium team have brought Glorantha to life in living colour, beyond everything. I can't get over the vibrancy of the world... It's the best possible time to get interested in RuneQuest."—RPG and video game writer Mark Morrison (interviewed in the Good Games article above).

"Newcomer friendly, with all the Glorantha you need being hard-baked into the rules. In my opinion it’s the best out of the box representation of Glorantha ever."—D101 Games, publishers of the fanzine Hearts in Glorantha.