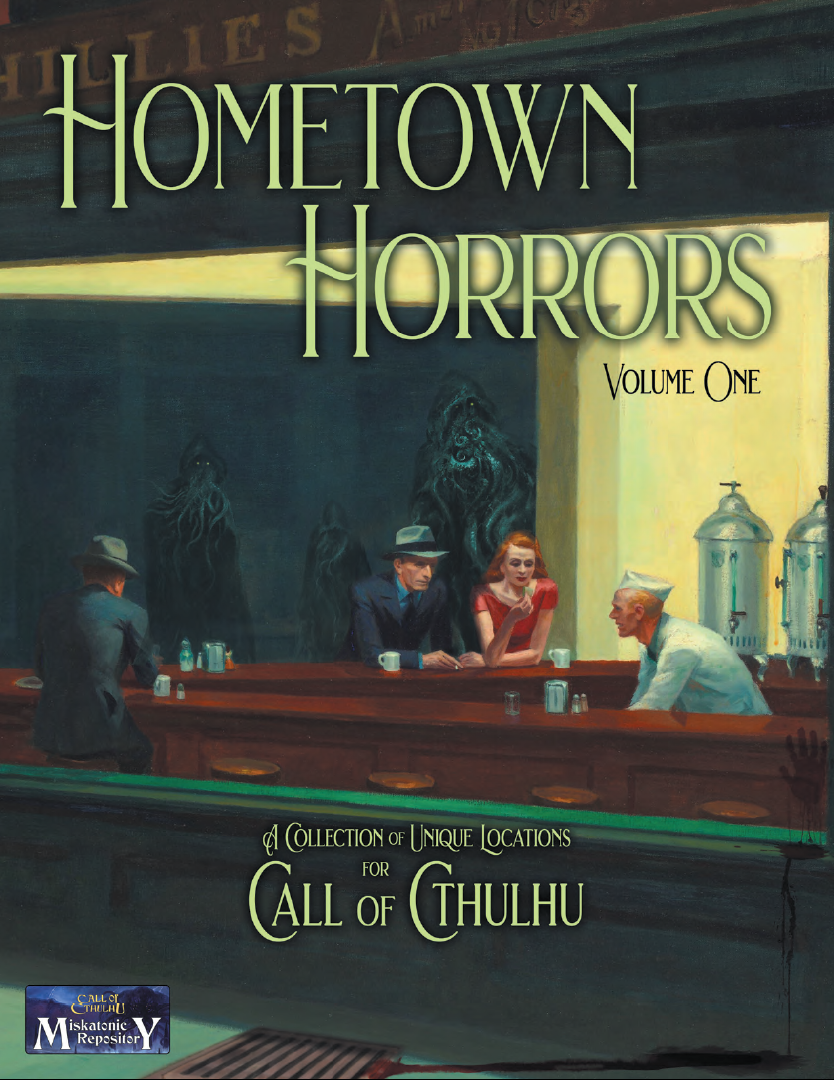 It's Miskatonic Monday – check out these latest releases from independent Call of Cthulhu community creators!

There’s no place like home! Hometown Horrors, Vol. 1 contains 15 guided tours of the creepy, the spectacular, the terrifying, and the downright odd, all from places that our contributors call home. From the vacation homes of Martha’s Vineyard to the rural Appalachians, from Montreal to Havana, let our tour guides show you the best their hometowns have to offer for your Call of Cthulhu games.

Welcome to a new sourcebook for Call of Cthulhu's Down Darker Trails Setting!

Returned from the dead centuries after his unspeakable transgressions orchestrated by a dark entity that manipulated him, the degenerate bloody viscount will begin his reign of terror anew. It will be the mission of the investigators to contact the last descendant of the cursed lineage and put a stop to the machinations of this being.

1917. The Great War is in full swing. On the Western Front, a group of soldiers in the British Army's 5th Stafford Regiment pulls back the veil and discovers a Mythos conspiracy orchestrating and observing events in Europe. How deep does this otherworldly conspiracy reach, and can the investigators stop it?

A young girl is mysteriously twinned during her debutante ball. Her father asks the investigators for help. As you travel around the city of Toledo, Ohio, you uncover a sinister plot that must be stopped to preserve the life of the two girls.

Plagued by nightmares, the investigators gather at a Boston diner only to encounter strange children with a sinister secret. What are they hiding, and how does it relate to the investigators? And what does Pastor Michael Thomas have to do with all of this? A "Standalone Sequel" to the classic Call of Cthulhu module "The Haunting".

A job offer that will take you to the stars and back after intensive and top-secret training will prepare you for the trip. Now all you need to do is succeed in leaving Earth or getting back to it. A one-shot adventure set in modern days.

In the year 9 C.E., the Roman Empire suffered one of its worst military defeats when a Roman commander of German descent betrayed his general. The subsequent slaughter destroyed three full Roman legions and forever stopped Roman expansion further into Germany. This Cthulhu Invictus scenario is set after that battle. Investigators take the role of survivors of the battle, the few legionaries who managed to escape with their lives. After rumors reach Rome that a Patrician's son might have survived, they are ordered back to the forest to investigate.

The Frogmen have arrived from the far reaches of space, and now seek to terrorize your group of Investigators! Contains information, statistics, and hooks in order to use two new Mythos Monster races to your game: The Frogmen, and the Yubhaust.

Let yourself be guided by the fumes of creativity and evoke the intangible mysteries of mind and spirit by playing an artist in Call of Cthulhu’s Classic Setting. This Occupation Kit builds on the brief information found in the Keeper’s Rulebook and Investigator Handbook, using both historical records regarding the effervescent artistic movements of the 1920s, and the representations of art and creativity in both H.P. Lovecraft’s original works and the rich history of Cthulhu Mythos roleplaying games’ scenarios and supplements. Find career paths, useful jargon, motivations and hooks, public perceptions of the occupation, and real-life examples from the 1920s and 30s. Part of a collaborative project - you can buy all 13 Occupation Kits as a bundle instead! Find it here!

Arkham, Massachusetts is one of the most identifiable places in Miskatonic Country. Whether your game is set entirely in this city on the coast of the Atlantic, or whether your investigators are merely stopping by on a single leg of their investigation, it's important to make the city feel as real and lived-in as possible. Though the setting guide for Arkham is full of resources you can use, the following list of 100 businesses can be used to fill in gaps, act as places to find clues and even as jumping off points for fresh mysteries should you desire!

Included you will find all the maps you need to play Servants of the Lake from Doors to Darkness. The maps are in PNG format and you can easily print them or upload them to any virtual tabletop software such as Astral, Roll20, Fantasy Ground, Foundry VTT.

This special bundle contains three titles - Cat's Cradle, Dream House, and Of Wrath and Blood - that are Miskatonic Repository sequels to the classic Call of Cthulhu introductory scenario The Haunting and playable by the same playgroup. The Haunting is available for free as part of the Call of Cthulhu 7th Edition Quick-Start Rules.

This special bundle contains eight titles - Cold Hunger, The Brockton Butcher, The Curse of Black Keetes, The Darkened Hermitage, The Pipeline, The Sins of the Father, There's Gold in Them Thar Hills, and Ultima Thule.

Plus new titles in Chinese, Korean, Polish, and Swedish!