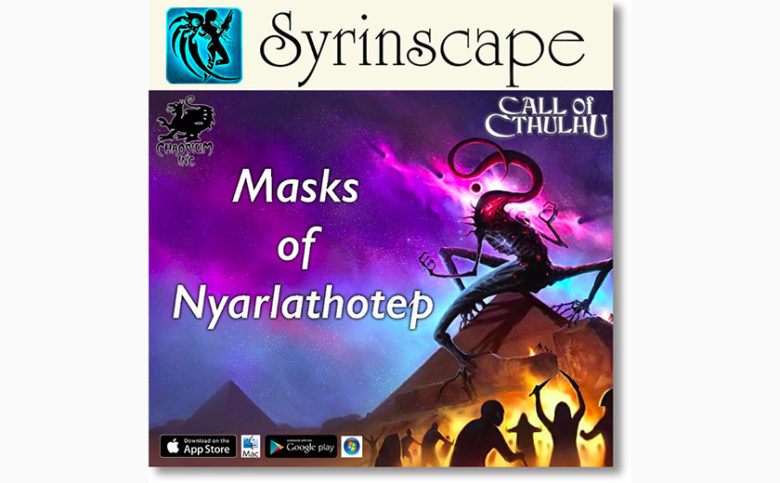 Syrinscape, the award-winning app that creates movie-like, immersive sound for tabletop games and Chaosium Inc., acclaimed publisher of award-winning books, roleplaying games, board games, fiction and more, announce today their partnership to create the official sounds for the Call of Cthulhu Roleplaying Game. With a suite of sounds for the base game as well as various modules in the works, players will experience this renowned game like never before. The first custom SoundSet, Call of Cthulhu 7th Edition: Masks of Nyarlathotep, is set for release at Gen Con 2018.

The new edition of Masks of Nyarlathotep is a complete reanimation of the classic multi-part campaign for the Call of Cthulhu game, with a new chapter and full-color all new maps, handouts and artwork. Set in 1925, the steadfast investigators must unravel secrets and battle the minions of darkness in an attempt to stop world-shattering events from destroying humanity. The Masks of Nyarlahotep PDF will release in May 2018, with the published edition coming out at Gen Con 2018.

To accompany the new edition, Call of Cthulhu gets its first official sounds from Syrinscape in the Masks of Nyarlahotep SoundSetwhich will be available for sale individually on Syrinscape.com or as part of a subscription. Set for release in conjunction with the module, gamers will be able to play Call of Cthulhu like never before in dynamic, realistic, cosmic horror sound.

“Call of Cthulhu is one of my top three games of all time and the opportunity to bring it to life through the power of Syrinscape sound is l' mgfm'latghnanah!,” says Benjamin Loomes, CEO of Syrinscape.

As players take on the role of investigators to uncover the secrets of the cosmos, they find themselves battling against crazy cults and horrors from beyond space. Created by gaming legend Sandy Petersen and now in its seventh edition, Call of Cthulhu is the definitive horror RPG and has won over 90 awards including being inducted into the Academy of Adventure Gaming Art and Design Hall of Fame.

“Call of Cthulhu games often involve creating more of an immersive experience than many other types of games. Just like our games often feature elaborate handouts and props, we have also noticed that our players often crave soundtracks that help build that sense of unease, suspense and dread at the gaming table, punctuated by moments of horror and excitement! Syrinscape’s sounds provide exactly that, and we are proud to be partnering with them,” says Chaosium president, Rick Meints.

Using a powerful audio engine and complex algorithms to produce ever-changing soundscapes and rich encounter-specific music, Syrinscape conjures every aural landscape imaginable, from ethereal forests and stony shorelines, to dank, vermin-filled dungeons, to the spooky depths of the underdark and the far-reaches of deep space. Designed by accomplished composer and tabletop gamer Benjamin Loomes, along with the developers at the Interaction Consortium, Syrinscape builds on more than 9 years of prototyping andcommunity feedback. Syrinscape is based in Australia. Syrinscape is available for a wide range of devices, including PCs, Macs, Android Tablets and phones, iPhones and iPads, and the players can be downloaded via syrinscape for free.