More than 1,000 character sheets printed later, and all our sessions at Gen Con have sold out! If you missed a chance to play those scenarios (or orchestrate them as a Keeper!) this Gen Con, don't despair. This fall those convention scenarios will be available through the Cult of Chaos Library over on the Chaosium Forums at BRP Central. Join the Cult of Chaos to facilitate them for others, or keep an eye out for Cult of Chaos sightings in your area to play them.

Here are the tournament scenarios we'll be running at Gen Con—for more than a 1000 players, on 206 tables, over three days, many thanks to Todd, our director of organized play and his team of dedicated volunteer GMs: 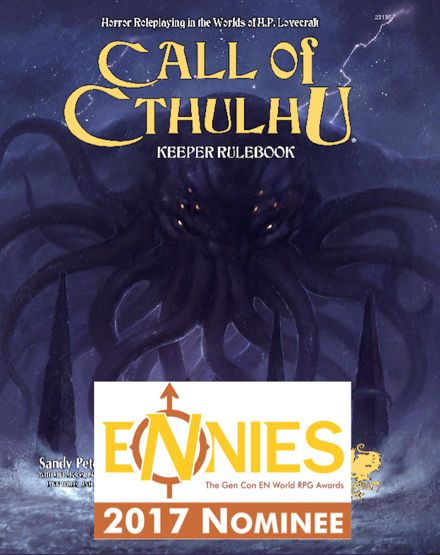 What's in the Cellar?

Arthur Blackwood has been charged with murder of his wife while on vacation. Desperate to clear his name, his lawyer has contacted acquaintances in hopes that they can help investigate her disappearance. Can you solve the mystery or is he truly guilty? This mystery set in the classic H.P. Lovecraft 1930's immediately plunges investigators into murder and intrigue. The is a perfect introduction to the system, while also asking players to solve the mystery before death strikes again!

A stone slab shifts unexpectedly, trapping the investigators in a tomb in the Valley of the Kings. Only then do the explorers discover that they might not be down here alone. Can you escape before doom engulfs you all? This mystery set in the classic H.P. Lovecraft 1930's immediately plunges investigators into danger and insanity. This is a perfect introduction to the system, while also asking players to solve the mystery before death strikes again!

The advert appeared in the newspaper, but it was unlike any other that day: SUFFERING FROM NIGHTMARES? UNIVERSITY HOSPITAL SEEKS WILLING PARTICIPANTS IN DREAM THERAPY STUDY. Successful applicants will be paid $5 a night (3 night - accommodation and meals provided) to participate in a study of their dreams, leading to possible treatment. Group therapy involved. Confidentiality assured. Please contact the Office of Dr Randall Thorne to arrange an appointment. What can go wrong in three nights in the psychiatric wing of a university hospital? Set in the classic H.P. Lovecraft 1930s. Pre-generated characters provided.

You and your friends are taking an impromptu off-season vacation from college and booked a couple of cabins in the Great Lakes. This will be just the thing to combat the stress of coursework and relax! A few days in the wilds full of peace and fun. With college far behind, what's there to worry about? Set in Modern Day. Pre-gen characters provided.

The Kids are Alright

1975, Montana at the foot of the Rockies. A bus returns from a youth field trip with all of the children safely in tow. Except for the three daughters of the town's highest ranking citizens. Worried about their children, these parents (the players), follow the expedition leader back into the mountains to the archaeology site that the kids spent the day at. What mysteries lurk in the woods as evening settles down on the players? Why would the children sneak back to the base camp after the bus was loaded? Pre-gens provided. Set in Modern Cthulhu.

Weekend in the Woods

1922, New Hampshire, deep in the Green Mountains. A bus drops off a dozen Boy Scouts from Arkham, Massachusetts to enjoy the last August weekend honing their skillcraft. The players, all scouts, have free reign of the lake, the lodge, and the campground. But it isn't too long before the woods suggest threats unknown to the scout leaders as eventually, one by one, scouts start disappearing? Pre-gens provided. Classic 1920s Cthulhu, Pre gens provided.

Set in the 1895 lead mining village of Ninebanks, nestled in the isolated moors of Northumberland, England. The scenario opens in the middle of the village’s annual harvest supper, during which a friend of the investigators falls deathly ill, spewing an ichorous vomit. The town drunk raves that this is a curse on the whole village, but is something else to blame? Pre-gens provided. Set in Gaslight era Cthulhu. 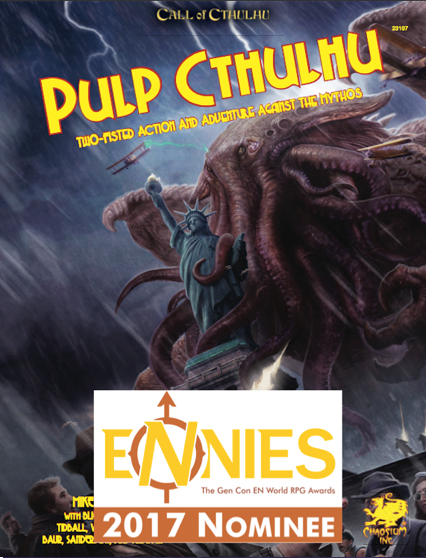 The Bureau of Investigation has a crack team of agents making up the cult-busting Department 29. Helping with a prohibition bust, the agents find clues that the funds are propping up a cult leader, the Red Viper. Following a lead, they end up at a booze-soaked charity masquerade where all is not what it seems. Can the investigators avoid the diabolical traps the Red Viper has set for them, unmasking him for the final arrest? Set in 1932 Pulp Cthulhu, pre gens provided. Only Call of Cthulhu 7th edition rule knowledge is needed. The rules for Pulp Cthulhu will be taught at the table. 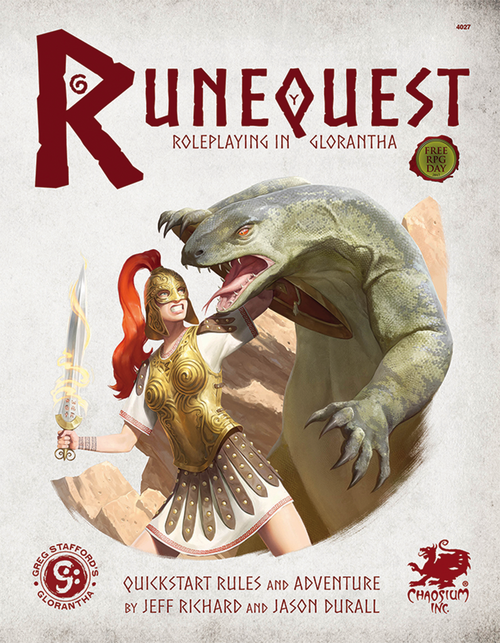 "The wealth of a clan is in its cattle", the saying goes. Sent by their chieftain to recover their stolen herd, the adventurers discover that their cattle are held in an ancient ruin in the badlands at the edge of their tribe's territory. Cattle thievery is common among the feuding tribes, but some mysterious force is at work this time. Can the adventurers solve the mystery of the old ruin and recover their herd before it is too late? This adventure is the Free RPG Day book for 2017. All players will get a printed copy of this RuneQuest Quickstart and adventure. Pre-gen characters provided.

[Note, this is currently mis-titled in the online guide as "The Old Ruin".]

Sent by your clan to steal a valuable jewel, right under the noses of the temple guards of Yara Aranis, The Reaching Moon, your band hopes to be in and out before you are detected. On this pre-dawn, black moon morning they are at their most vulnerable, but if a fight breaks out as you escape, you are well prepared to smash your way through the compound gates. The rules for the game will be taught at the table. 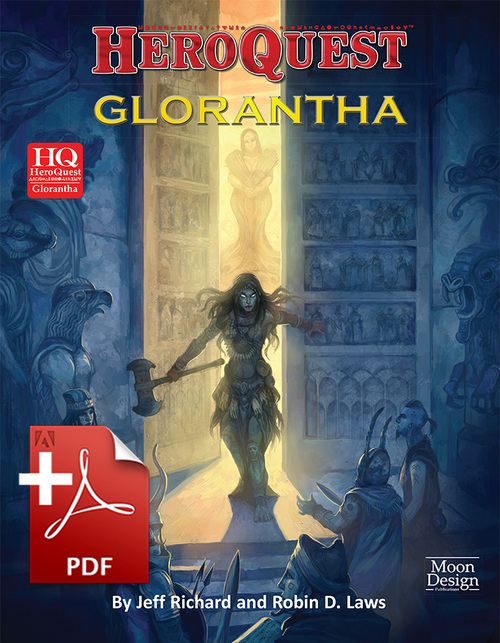 A sickness sweeps through Red Cow Fort, and, as the clan reels, some of the children go missing. Meanwhile, the feud with the treacherous Emerald Sword clan rages on. What happens if they learn of the crisis? Can you find the children and return them safely home? Can you uncover the source of the outbreak? An adventure from the new Chaosium release, The Eleven Lights. Customizable pre-gen characters provided.

Upon taking shelter from a dust storm in the city of Pavis, you and your companions are taken prisoner by the occupying Lunar Empire. They then press you into representing the Rebel Gods in ritual that reinforces the Lunar domination over your lands. But it may be that they have chosen their rebels too well, and have gotten more than they bargained for. Can you turn the tables in this ritual and weaken their dominion? Customizable pre-gen characters provided.

For decades, Stage City relied upon the protection of The All-Stars, a team of legendary super-powered heroes based on an island in the harbor. Suddenly, All-Star Island is destroyed with all hands believed lost. You are one of Stage City's other heroes. Who, for one reason or another, never joined the big team. Now though, it's up to you to become the heroes that Stage City needs in its darkest hour. Characters will be made at the start of this adventure. Customizable pre-gen characters provided.