Cassilda’s Song is Chaosium's collection of weird fiction and horror stories based on the King in Yellow Mythos created by Robert W. Chambers—entirely authored by women

Chaosium's fiction anthology Cassilda's Song: Tales Inspired by Robert W. Chambers King in Yellow Mythos has been named as a finalist for two World Fantasy Awards—for the Anthology itself, and for one of the stories in the book, "The Neurastheniac" by Selena Chambers.

Laird Barron (in his Feb 2016 review of Cassilda’s Song in Locus) said, "2015 was a good year for horror and weird fiction anthologies. Cassilda’s Song is an able demonstration of why. It’s also a pleasant, if macabre, signal that the field is flourishing.... The table of contents is exceptional not for the fact that it’s composed entirely of women, but rather for the high level of quality."

About Selena Chambers' tale in Cassilda's Song, Barron writes, " -- Gorgeous, intricately layered, and extremely strange, this piece may be the blue ribbon exhibit in an exemplary batch …this is top shelf stuff."

"I’m absolutely thrilled to see Cassilda’s Song receive the WFA nomination in the anthology category and I am humbled to be in the company of my fellow nominees. Being nominated is high tribute to the ladies who contributed to Cassilda’s Song, tribute they well deserve. Each of them brought their A-game to the project and it was a great pleasure and honor to work with them. With their hard work, far-reaching vision, and storytelling gifts, the contributors are the reason this voyage is praiseworthy.”

Selena Chambers, author of "The Neurastheniac" said of the nominations:

"Out of all the things that I expected to happen this year, or any year for that matter, a World Fantasy Award nomination for a short story I’d written wasn’t on the radar. So, I am still euphorically shocked by it. It is an extreme honor, and I am humbled to be in such eminent company as my fellow nominees. Congratulations to my epic editor, Joe Pulver (and my Cassilda sisters) for his anthology nomination and to all the other WFA finalists. Last, but not least, I’d like to express my gratitude and thanks to the judges for recognizing “The Neurastheniac”.

The WFA awards will be presented during the World Fantasy Convention, held October 27-30, 2016 in Columbus Ohio

"One stand-out in late 2015 is the “wonderful” and historic Cassilda’s Song, edited by Joseph S Pulver Sr. and featuring a who’s who of not just the top women writing weird fiction today but some of the very best authors and stories of the year period" 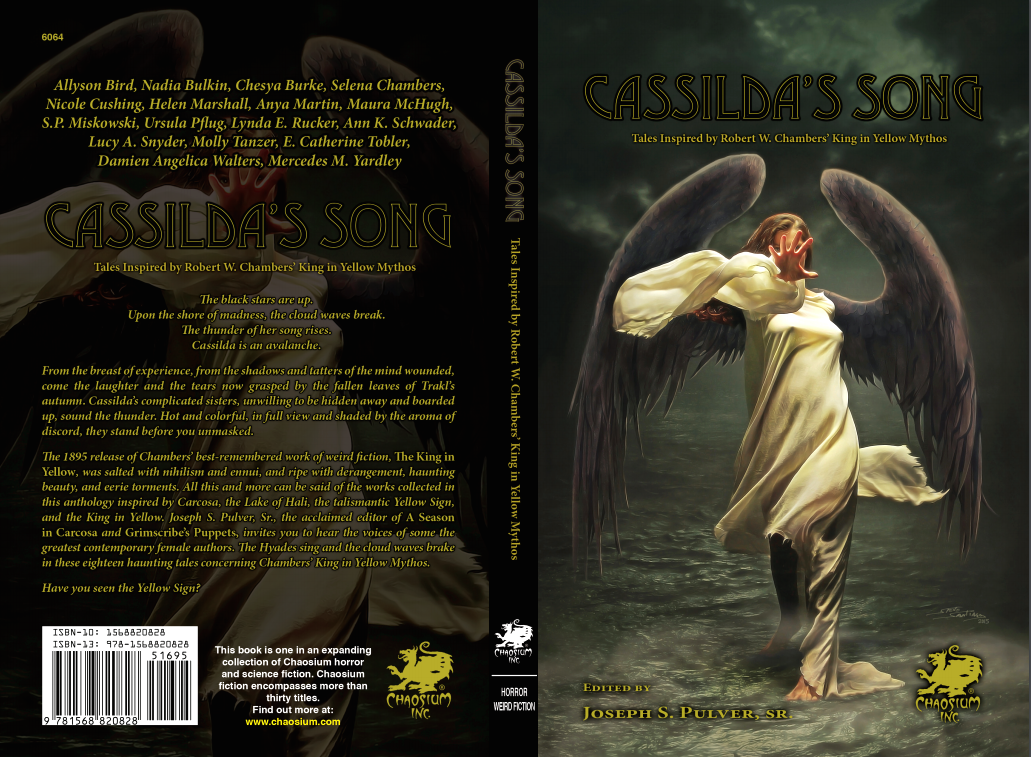 Cassilda’s Song is a collection of weird fiction and horror stories based on the King in Yellow Mythos created by Robert W. Chambers—entirely authored by women. There are no pretenders here. The Daughters of the Yellow Sign, each a titan of unmasked fire in their own right, have parted the curtains. From Hali’s deeps and Carcosa’s gloomy balconies and Styx-black towers, come their lamentations and rage and the consequences of intrigues and follies born in Oblivion. Run into their embrace. Their carriages wait to take you from shadowed rooms and cobblestones to The Place Where the Black Stars Hang.

Check out the extensive range of other Chaosium fiction.