We don’t have a publication date for 13th Age in Glorantha (aka 13G) yet. We’re still in the middle of acquiring art. Jeff is commissioning art for 13th Age in Glorantha’s interior. I’m commissioning the cover, setting up the layout process, and taking advantage of the art window to handle the final playtest tweaks thoughtfully. In other words, I'm still scratching my head over the Puppeteer revision and a couple of the hell mother spells, but I believe I'll be done with the playtest tweaks in 2d6 days, at which point we'll put the new version of the MS word file into people's accounts on the Glorantha.com site.

Meanwhile, in another part of the Kickstarter universe, Sandy Petersen’s The Gods War game is headed towards a big win. I am excited about The Gods War! It speaks to many of my selves, from the fourteen year old RQ fan who first heard the Spike explode to the social anthropologist turned game designer who loves colliding pantheons.

But it’s not enough to acknowledge Sandy’s wonderful game. I wanna take advantage of it! So here’s a first stab at using Gods War miniatures in 13G. In keeping with our default setting as a fight against Chaos, I made stats for the twisted broo miniature in the Chaos faction. Given that there are six of the broo minis, I thought it would be fun to make them mooks. And given Sandy’s The Gods War design notes on how the broos should really be sacrificed as quickly as possible to ramp up the Mad God’s body count, the mad god’s spirit ability makes these mooks the creatures you don’t want to kill until the nastiest Chaos monsters are dead.

My first guess is that the Thedspawn may be more common in corrupted myths than they are in the mortal world. I like the idea of some broos being encountered only while on heroquests . . . .until, of course, the rules change and they’ve erupted into the world of mortals. 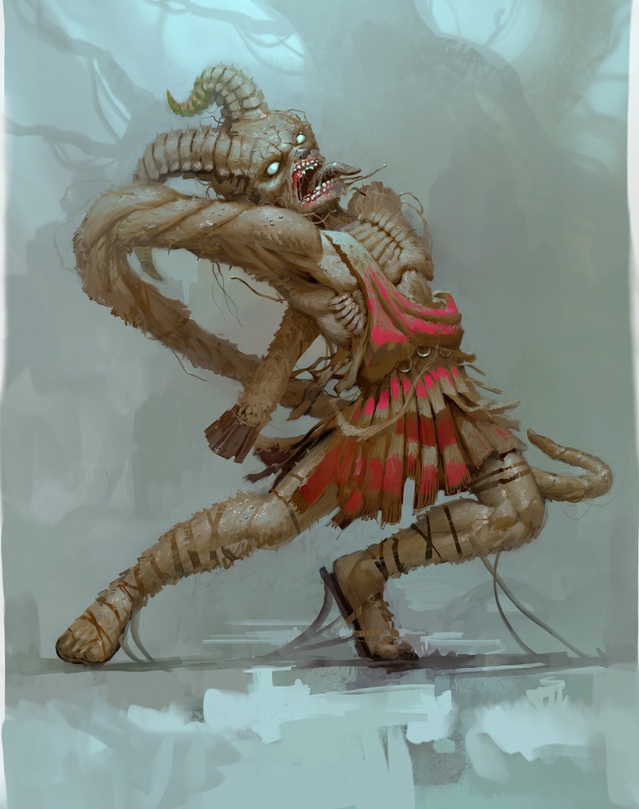 Natural 16+: Target pops free of any creatures it is engaged with and moves to be engaged with the Thedspawn.

Special: Use only when not engaged with an enemy.

Pack of six: If you’re playing fair with the PCs, use no more than six Thedspawn mooks in a battle. (If you’re not playing fair, and two or more of your group bought The Gods War, go higher.)

Diseased Thentacle: Anyone hit by a Whipping Thentacle attack is exposed to a disease after the battle (as explained in the Chaos Disease Mechanics section of 13G).

Mook: Kill one Thedspawn mook for every 25 damage you deal to the mob

[Thedspawn art from The Gods War Kickstarter by Petersen Games]