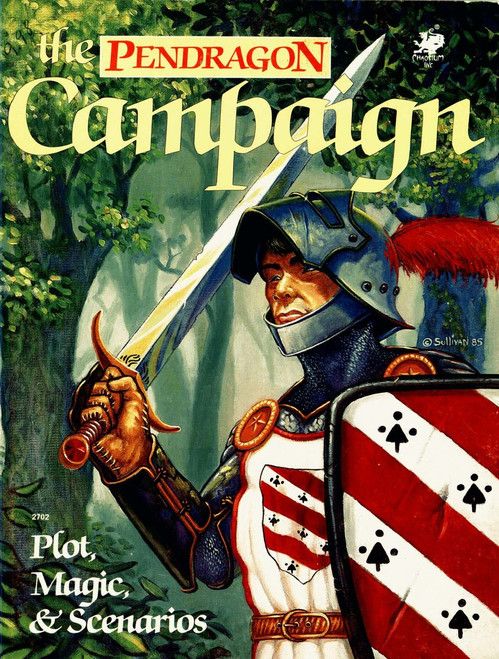 The Pendragon Campaign is Greg Stafford's original expression of the great sweep of story that he later covered in full detail in Great Pendragon Campaign for the 5th edition of his award-winning King Arthur Pendragon. It give modern gamers the opportunity look get an inside look at the classic roleplaying game. If nothing else, you should read Greg's Designer's Notes on page 70, the conclusion of which begins as follows:

"I seek expression through creating roleplaying games; to exerise the imagination is to exercise the soul. Pretending to be a knight in the world of King Arthur stimulates the mind, imagination, and psyche of every participant and is good for mental, spiritual and emotional health. Seeking and experiencing the infinite variety of human experience in the realm of myth and legend can only aid the inquisitive seeker."

The Pendragon Campaign itself contains the following material:

MAGIC- The player-characters frequently contact magical knights and other minions from the land of the faerie. Britain is a battlefield for diverse traditions all possessing their own characteristic magics. The Saxons support their brute force with shapeshifting and weather control magics. The Christians draw upon prophecies, miracles, and healings. The native pagan-Celtic followers of the Druids are backed by illusion, emotion-control, and movement magics. The most important wielders of magic are detailed, along with the powers they manipulate.

SCENARIOS - the scenarios included in this book all occur during the earliest years of the Arthurian campaign. They start you on the way to your own Pendragon campaign. Included are two battles against the Saxons, a Quest against an evil knight, and an expanded scenario to test the player-characters' personalities and courage.

PLOT - a detailed, year-by-year analysis of King Arthur's long reign integrates the stories of Malory, Nennius, and the French Vulgate with Welsh and Saxon sources to weave a deep, rich, background for campaign episodes. Described are countless incidents deserving of expansion into their own scenarios.

THE CHARACTERS - Background and chronology for King Arthur, Guenever, Lancelot, and Mordred is provided, including notes on the affair, Arthur's other sons, and related subjects. An analysis of the High Court and an annotated list of the up-and-coming knights of each phaase help the gameamaster run a full campaign. A descriptive list of magicians, saints, and villains completes the Characters section.

GAMEMASTER NOTES - the whole book is begun with extensive notes about running a Pendragon campaign, including hints gleaned from the house test-sessions.

DESIGNER'S NOTES - the author ends the book by telling why he made the decisions that shaped the game.