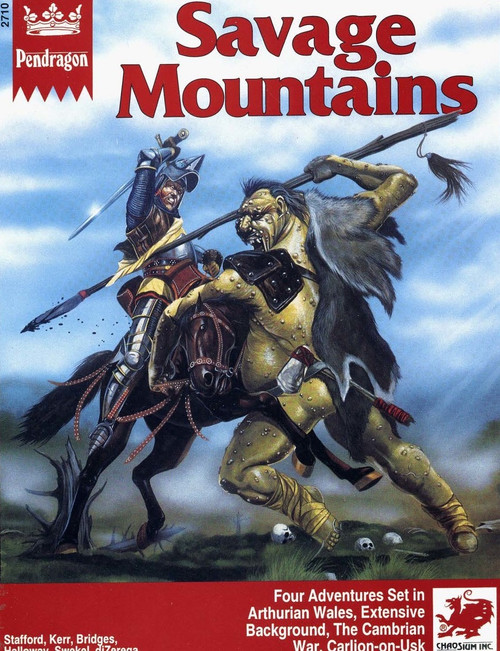 Heroic adventure in the wilds of Cambria

Savage Mountains features four complete adventures for the King Arthur Pendragon roleplaying game, set among the wild mountains of Wales. Ample background information is provided for the gamemaster. including details on the peoples of the region, politics, and notable places. Particular sections of this book are intended to be photocopied and be given to the players. A major city in the region, Carlion-on-Usk, is described and is illustrated in detail.

The Adventure of the Dolorous Wyrm - This scenario is designed for at least four but no more than eight player knights with good  combat skills. Since it offers the player knight a chance to gain King Arthur’s personal favor, the main opponent (the Wyrm)  is very deadly.

The Adventure of the Best Wine in the World - This scenario tests the personality traits and the behavior of the characters. It deliberately tempts and tries to cause the characters to err.

The Cambrian War - Given here are instructions and suggestions for waging King Arthur’s war against the traditionalist tribe’s of Cambria. It is loosely modeled on the conquest of Wales by King Edward I,  hence the intrusion of concentric castles sometime during this phase of your campaign.

The Adventure of the Paulag Cat - In this adventure the player knights must stop a monster known as the Paulag Cat, which is ravaging the Isle of Man and the castle of Beaumaris.

Tales of the Spectre Kings - PDF