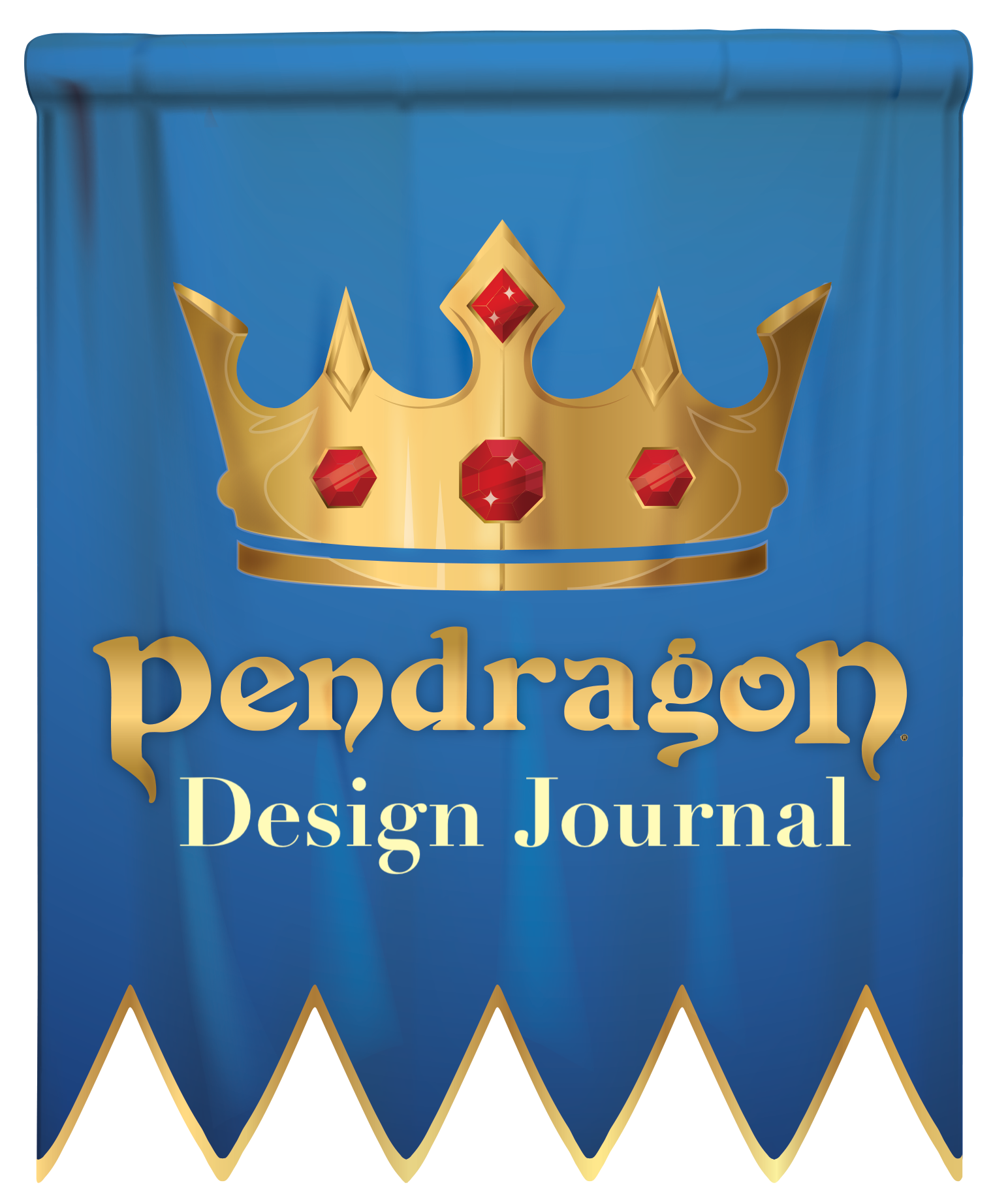 Last time, we took a look at how 6th edition Pendragon handles that most important knight’s duty: combat. But there is more to a knight’s life than fighting, and there is a place where the stakes are just as high as on the blood-soaked killing fields: the courts of the nobility.

The key to success when navigating the halls of power is Geniality. First introduced in the 5th edition supplement Book of Feasts, this is an entirely subjective Statistic. Everyone’s “base” Geniality is 0. Unlike Glory, Geniality is ephemeral, constantly rising and falling. Unlike Honor, Geniality has nothing to do with one’s inherent worth. Rather, it is strictly external: what are you wearing? How richly are you living? Was that you who dropped that witty bon mot? Or did you just inadvertently insult the king?

Your character’s Standard of Living is the best way to raise Geniality. The wealthier you appear, the more prestigious your titles, the more favorably you are viewed by your noble peers. Beyond that, all bonuses to Geniality are transitory: with the appropriate outlay of treasure, you can get yourself dolled up with gold and jewels for that all-important appearance before the king; the Fashion Skill is indispensable here. And feasts (discussed in more detail below) carry the potential for massive Geniality bonuses—or shame and ignominy!

So what does Geniality get you? Simply this: Geniality acts as a modifier to your character’s Appeal (APP) Characteristic and most Courtly Skills (specifically Compose, Courtesy, Dancing, Fashion, Flirting, Gaming, Intrigue, Orate, Play Instrument, and Singing). It also acts as a modifier to everyone else’s Recognize Skill when applied to you.

Geniality reflects the highly subjective, hierarchical courtly environment. Does being genial make you a better chess player, then? No, but it makes it more likely your opponent will let you win in order to curry favor! However unjust, a rich lord, well-dressed and possessing noble titles, will have his voice heard (Orate), his petitions granted (Courtesy), his attention returned (Flirting) with much greater success than an ordinary household knight.

Where Geniality truly shines, in my opinion, is the fact that all nobles possess it: knights and ladies alike. A big bull of a knight might be an unstoppable force in combat, but a Genial lady (or more courtly knight, like Sir Tor) will run circles around him at court. Queen Guenever is the most Genial of all, and through this she wields tremendous influence and power. The core materials focus primarily on the application of Geniality to the lives of knights, but we do have plans for a future supplement that will go into courtly play in much greater detail.

As mentioned, feasts are where Geniality truly shines. If you are familiar with the Feast Deck from the Book of Feasts, you may be pleased to learn that 6th edition uses a similar approach. A basic set of feast cards will come packaged with the forthcoming Pendragon Starter Set, with a larger deck available separately. If you already own a Feast Deck, you can simply use that. There’s even a simplified card-less system included with the feasting rules for groups without access to a deck, or for those who prefer not to use cards.

For those unfamiliar with the Feast Deck, each card presents an event that occurs during a feast, usually involving just one character but sometimes affecting the whole group. (These latter event cards can have unexpected knock-on consequences! In a recent session in my current campaign, one of the Player-knight’s call for “More Drink!” led to serious embarrassment for another Player-knight, who ended up getting drunk and causing a scene.) 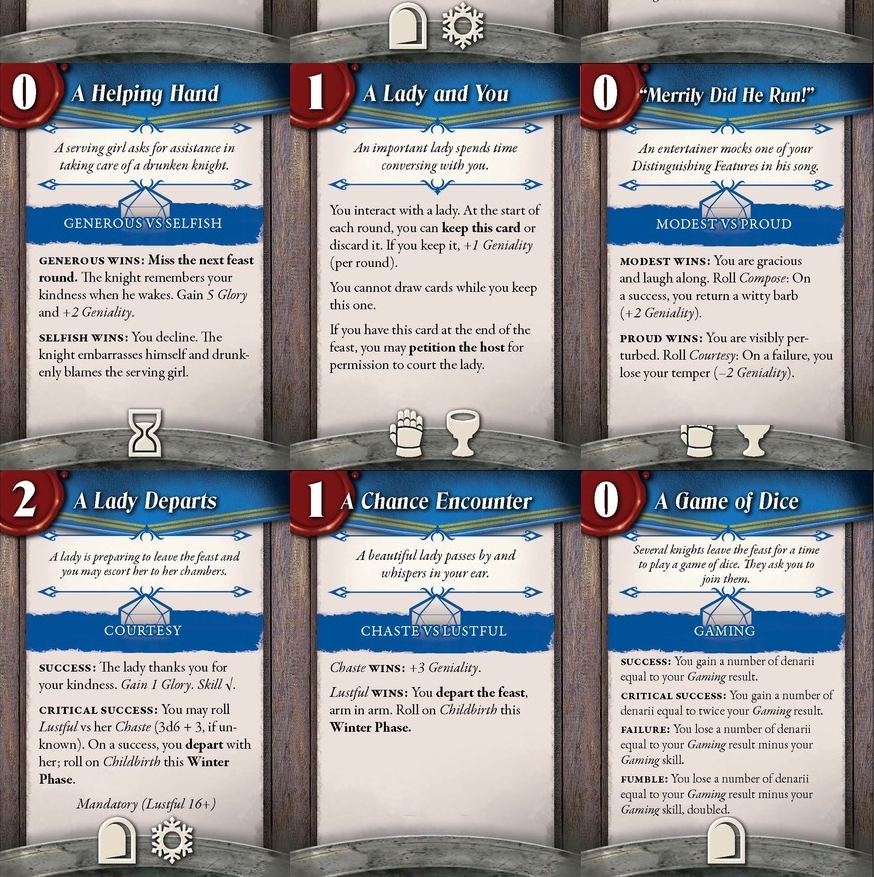 Many cards carry a bonus to Geniality, often with a chance to increase that bonus further with a successful Skill or Trait roll—or turn the bonus into a penalty with a failed roll. As the feast goes on, the Player-knights track their Geniality as it rises and falls. At the end, these scores earn a little Glory, and potentially much more if a Player-knight has earned enough to exceed the feast’s Geniality Threshold, meaning they are remembered as a highlight of the evening by all in attendance (and earning a more significant Glory award). Naturally, the larger the feast, the harder it is to hit that threshold. Royal Feasts more or less require you to start with a high base Geniality from your station for there to be a chance at exceeding the threshold, whereas an equally-opulent lord or lady attending a feast is all but guaranteed to be the standout guest.

Glory from feasts is all well and good, of course, but perceptive readers will have noted that, with the potential for stacking Geniality bonuses, feasts are hands down the best venue for courtly maneuverings. From Intrigue and Flirting to Courtesy and Orate, Player-knights and ladies can use feasts to further their ambitions in a variety of ways. But beware the temptations of too much drink, or an inviting smile, lest you end up humiliating yourself in front of your lord and peers, or even find yourself challenged to a duel over an affair of honor!