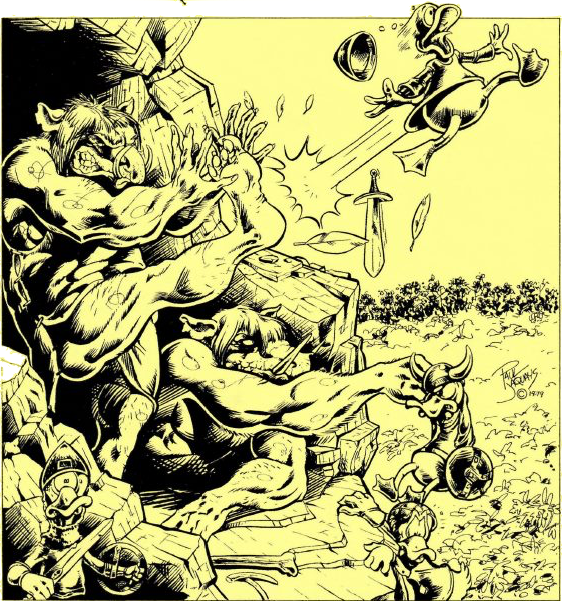 Over on the RuneQuest Facebook group there's been a wonderful, fragmented discussion of the origins of Ducks in Glorantha recently. I thought I'd spend a little free time writing down what I know...

In 1975, Greg Stafford published his wargame White Bear & Red Moon. To thank his playtesters he gave them the opportunity to name some of the generic/unnamed places on the map. Thus, Jonstown honors Bill Johnson, Steve Swenston appears as Swen's Town, Rory's Well is named for Rory Root, and Wilm's Church immortalizes William Church.

Greg Stafford, along with Brian Crist, Rory Root and several others, were all really into comics, including Carl Barks' Uncle Scrooge and Marvel's Howard the Duck. Brian and Rory both ran comic book shops as well. Being a big fan of Carl Barks' art, Brian Crist asked to have Duckburg on the map. Greg and he compromised on Duck Point so Disney wouldn't get their feathers in a bunch over the name. But despite the name, ducks were not actually in the game (or Glorantha) just yet.

In 1977, as the monsters were being developed for the RuneQuest RPG, Ducks made their first appearance during play testing, mainly as a Hobbit equivalent. Ducks were described but not pictured in the 1st edition of the RQ Rulebook in 1978, nor the 2nd edition published in 1979. The earliest depiction of Ducks I can find for RuneQuest is Jennell Jaquays' cover art for Wyrm's Footnotes #8, drawn in 1979 (shown above), followed by Rick Becker's Duck silhouette in FOES in March of 1980: 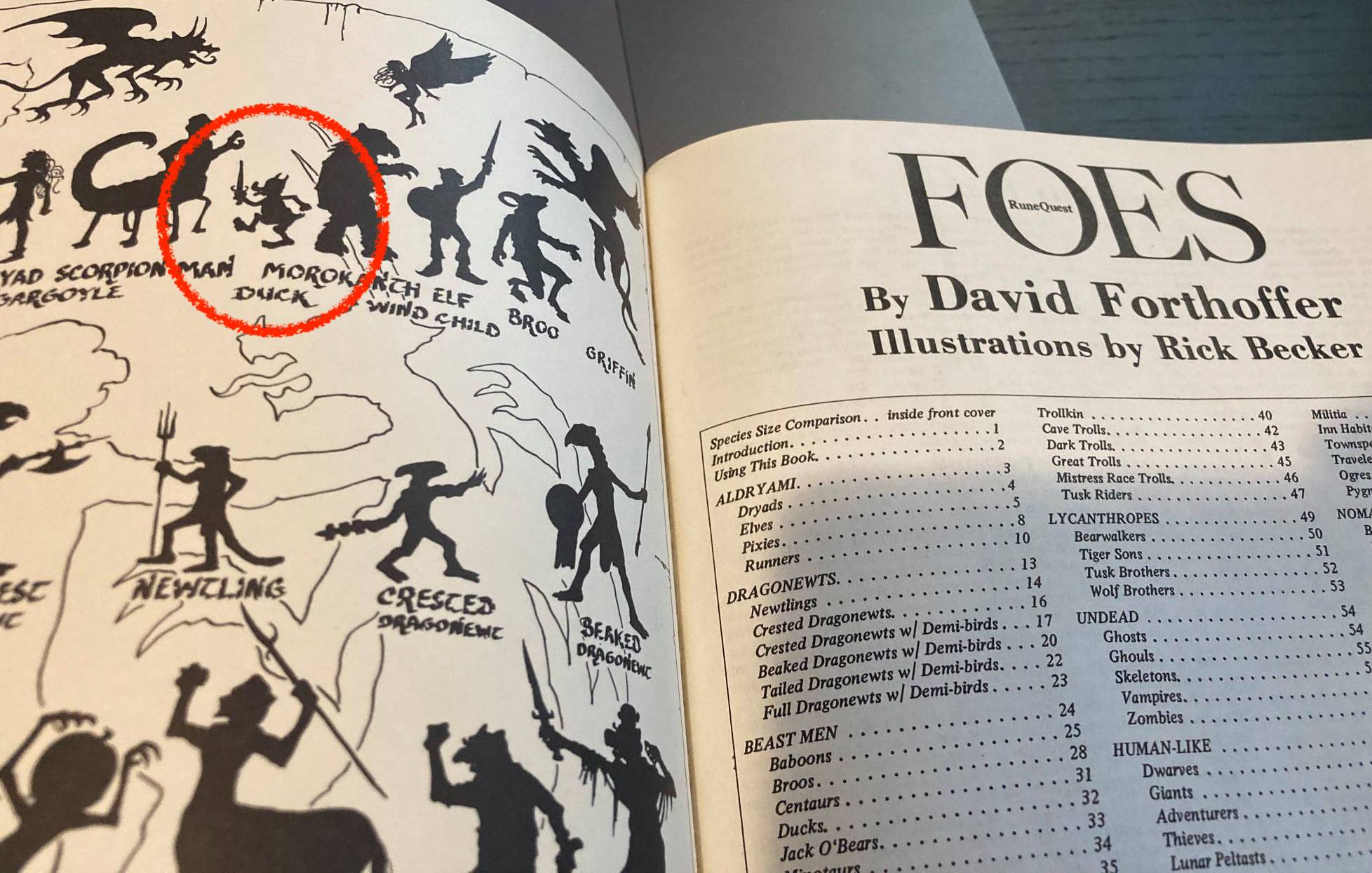 Ducks were formally added to the 4th edition of White Bear & Red Moon in 1980 when it was renamed Dragon Pass. Three new City Militia counters with that silhouette were labelled as Ducks, Ducks and, More Ducks.

The rest is history, and the majestic race inspired by Uncle Scrooge and Howard the Duck has been with us ever since...

"Rick Meints suggested I reveal who is behind the curtain in the story of the origin of duck kind...

The story starts with a gifted miniatures sculptor named Neville Stocken. Neville had a problem of never seeing an IP he didn't want to do figures for. His attempt to do Star Wars figures is legendary, and can be found on the internet. Just Google his name.

Neville was a good friend of Greg Stafford and did several miniatures for Glorantha including Dragonewts, Lunar hoplites, and classic depictions of Herrek, Jar-eel the razoress, and Gunda the Guilty.

Neville saw the cover of Howard the Duck #1 and soon a card showed up on the spin racks of game stores all over the country of Barbarian Duck and His Old Lady. Extremely true to its source, and Marvel's lawyers were not amused.

So Neville came to Greg and asked Greg for a Gloranthan Place for Barbarian Ducks and their Old Ladies, to show Marvel that the inspiration was not the comic book.

As it happened, we, the authors of RQ, were looking for a hobbit-like adventurer for the game. Howard passed the physical (small, feisty, distinctive feet), and the ducks of Glorantha were born.

We're all familiar with the official story of how the ducks were humans cursed for cowardice. Other origins have been put forth, and of them all I prefer that promoted by Steve Lortz, one time associate of Neville's and sadly no longer with us.

It seems in one of the Great Conflicts that festooned Glorantha's early history a cabal of sorcerers sought to summon a thousand foot long fire breathing dragon. Somewhere along the way, a scale marker was misplaced, and instead of a thousand foot long fire breathing Drake, they got a thousand cigar-smoking male ducks. The question arises as to how these male ducks perpetuated the race. The answer is the Barbarian duck's Old Ladies. This is a fantasy world, after all."