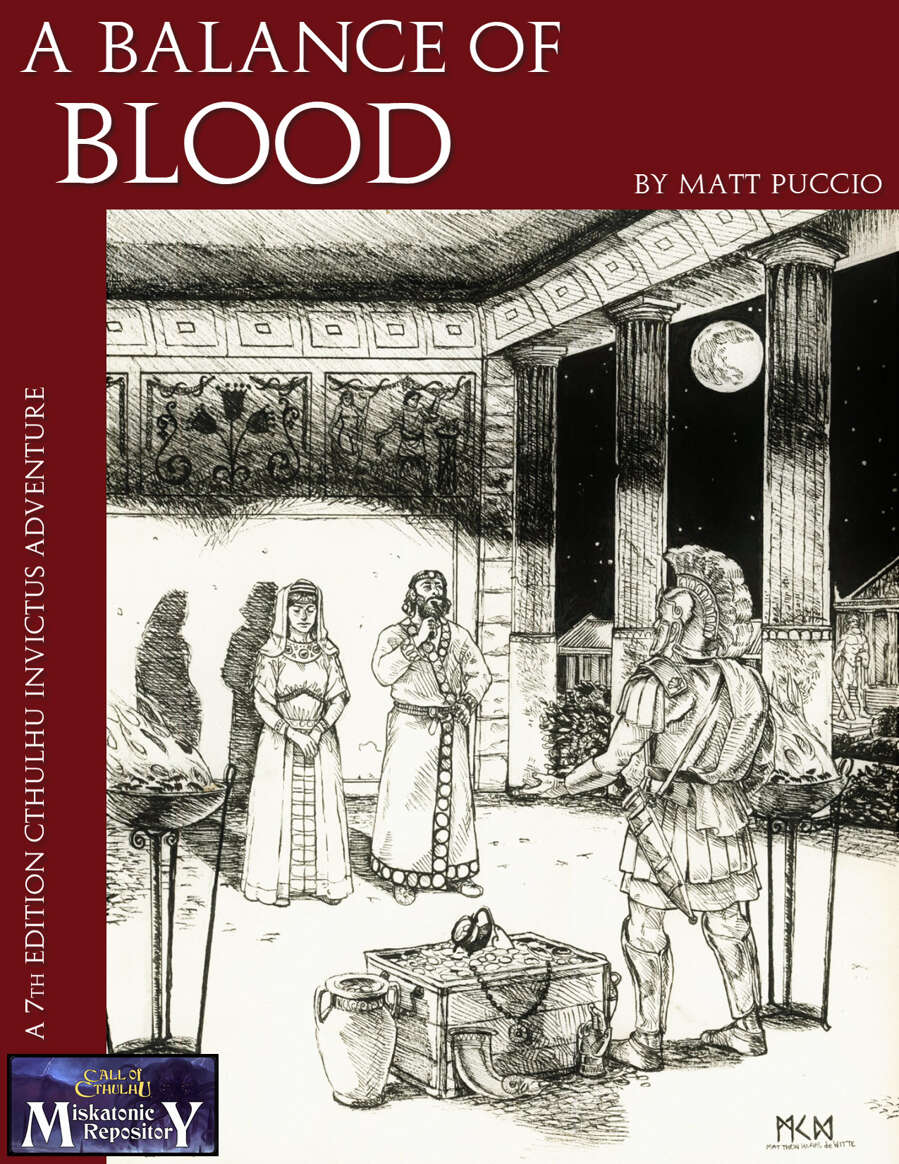 “Exitus Acta Probat (The end justifies the means)” – Ovid. Martius, 134 AD - Sub-Legate Aulus Cassius Ravilla leads an advance team to Armenia to lay the groundwork for an upcoming diplomatic meeting; there, he and his team must choose between their fealty to Rome and helping their host uncover the source of his family's woes.

A Balance of Blood is a 7th Edition Cthulhu Invictus scenario for 4 to 6 investigators.

Three religious studies scholars, fascinated by legends of other worlds, stumbled upon tales about the “Shepherd of Moths,” a mysterious cosmic entity. The Shepherd is said to wander the world, transforming willing occultists, as well as random victims, into moths and then taking them on a journey to distant worlds and back. All three scholars swore to one another that they’d never perform the ritual they had learned. However, when one of them disappeared, along with the notes about the Shepherd, the other two realized that the promise was broken and a wave of kidnappings has started plaguing the city….

This is the English version of the first non-English electrum bestseller on the Miskatonic Repository: Zgrozy - Pasterz Ciem.

Reviews from R'lyeh review here: "A solid start to the Zgrozy line."

Sometime in the late 1920s, the investigators are sent to a small town in Connecticut to deal with a troubling infestation. Upon arriving, they find that the town is overrun with police, trying to rid it of oversized bees. Who did this, and why? More importantly, how are the investigators going to stop it from happening again?

Return to the disturbing and inhuman island of Dr. Moreau. H.G. Wells' classic tale gets a Cthulhu-style sequel in this immersive follow-up to one of the originators of the sci-fi genre.

Cabin Fever is a survival horror scenario that forces the Investigators to fend off otherworldly terrors while also uncovering the truth behind a string of brutal murders. To survive, they will need all their wits and skills. Can they make it out alive, or is their fate a gruesome one?

Your online gaming group in a post game chat all agree that you should meet up in person for once (In person!), everyone that can make it to Boston at least, for the bi-annual DreadCon gaming convention run by the maker of your Lovecraftian RPG of choice, Disorder Gaming... The passes get you into the secretive STARLIGHT CEREMONY that the Gaming company runs for only the most loyal of friends of the company!

Historical scenario set in the Netherlands of 1849, in the early stages of the reclamation of the country’s largest lake, the Haarlemmermeer (Haarlem’s Lake). In its course, the investigators will be inquiring into the sabotage of the Lynden, one of the three enormous steam-powered pumping mills that were constructed on the shores of the lake to facilitate its drainage. Soon they discover that the sabotage is just one of a series of strange happenings that surround the emptying lake.

Though set in the Netherlands, the scenario itself is written in English.

This free supplement presents simple mechanics that can be added to your game so that you can keep the level of lethality and insanity turned up while not sacrificing the ability to play Mythos savvy investigators.

Plus this Polish language release: 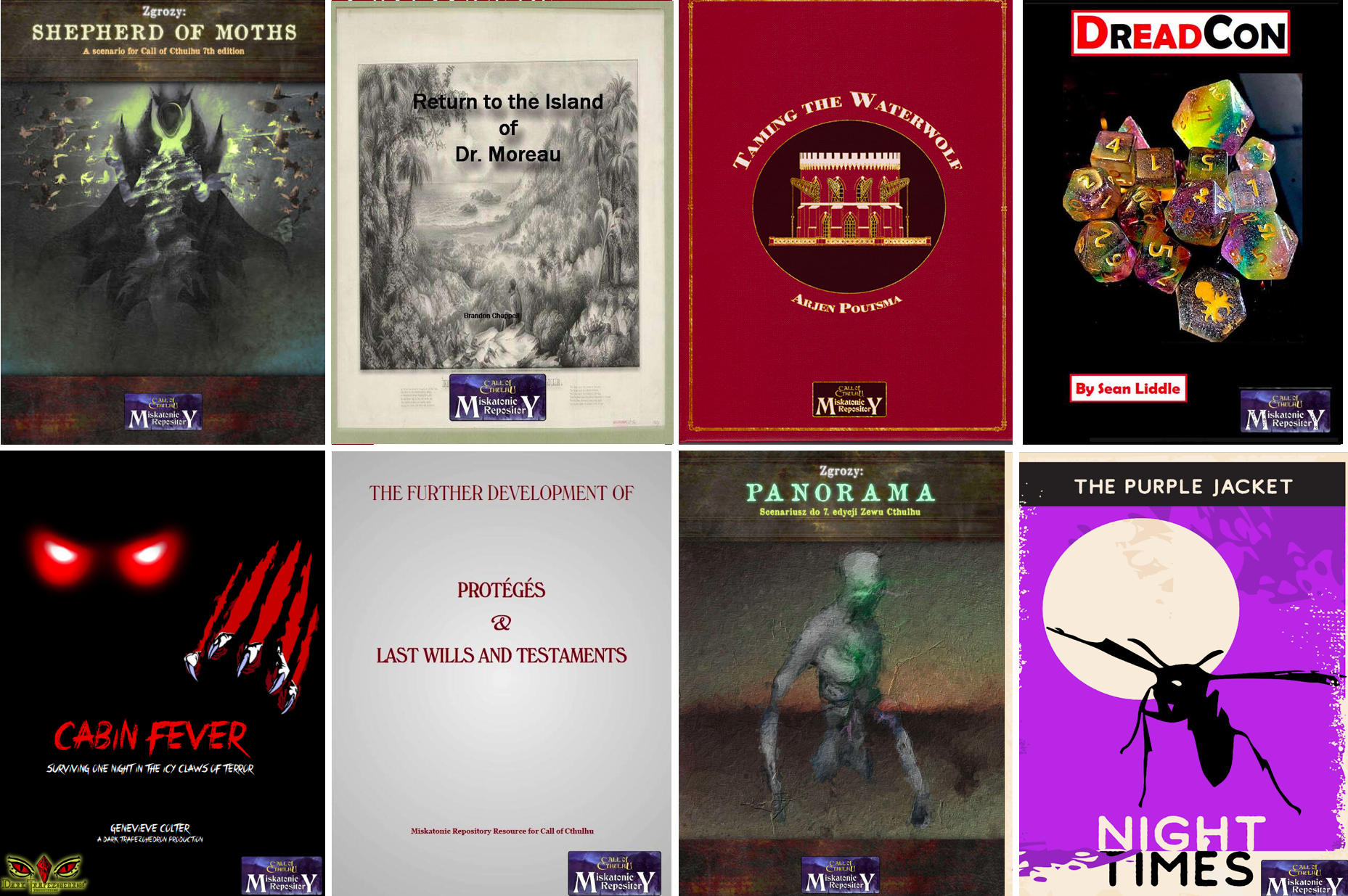 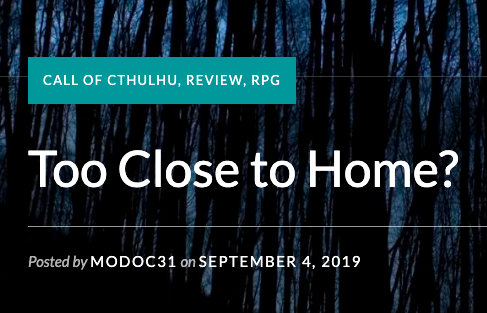 "Without a doubt Too Close to Home is worth picking up! ...As I prepare for the fall convention season, Too Close to Home has been added to my list of scenarios that I will rotate through at the conventions and store events I plan to attend. The long and short of it—grab this scenario!"—Rollingboxcars

Contribute to the Miskatonic Repository