If you recently picked up our new double hardback version of Horror on the Orient Express, did you know our Call of Cthulhu supplement Reign of Terror was originally created as a "secret chapter" for that campaign? And that it is currently on sale at a special price at Chaosium.com? 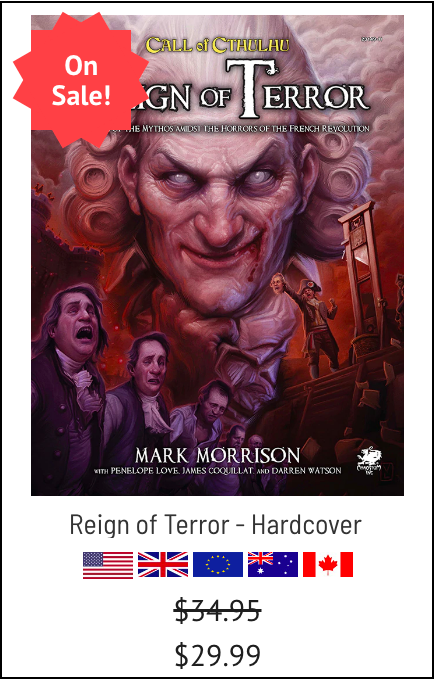 Reign of Terror is an epic two-part historical scenario, set during the French Revolution.

Developed by Call of Cthulhu mastermind Mark Morrison as a secret chapter in the story of Horror on the Orient Express, Reign of Terror has been designed for play with or without reference to that campaign.

If used with Horror on the Orient Express, it provides an exciting and action-packed “living handout” that brings new insights and illuminates the players into the full horror of one of the campaign’s dire villains.

Alongside the two-part scenario, this 128 page full color book also includes a range of scenario seeds, each providing roots for extending play and building a longer, more in-depth campaign.

Winner of the 2018 Gold ENnie for Best Supplement.