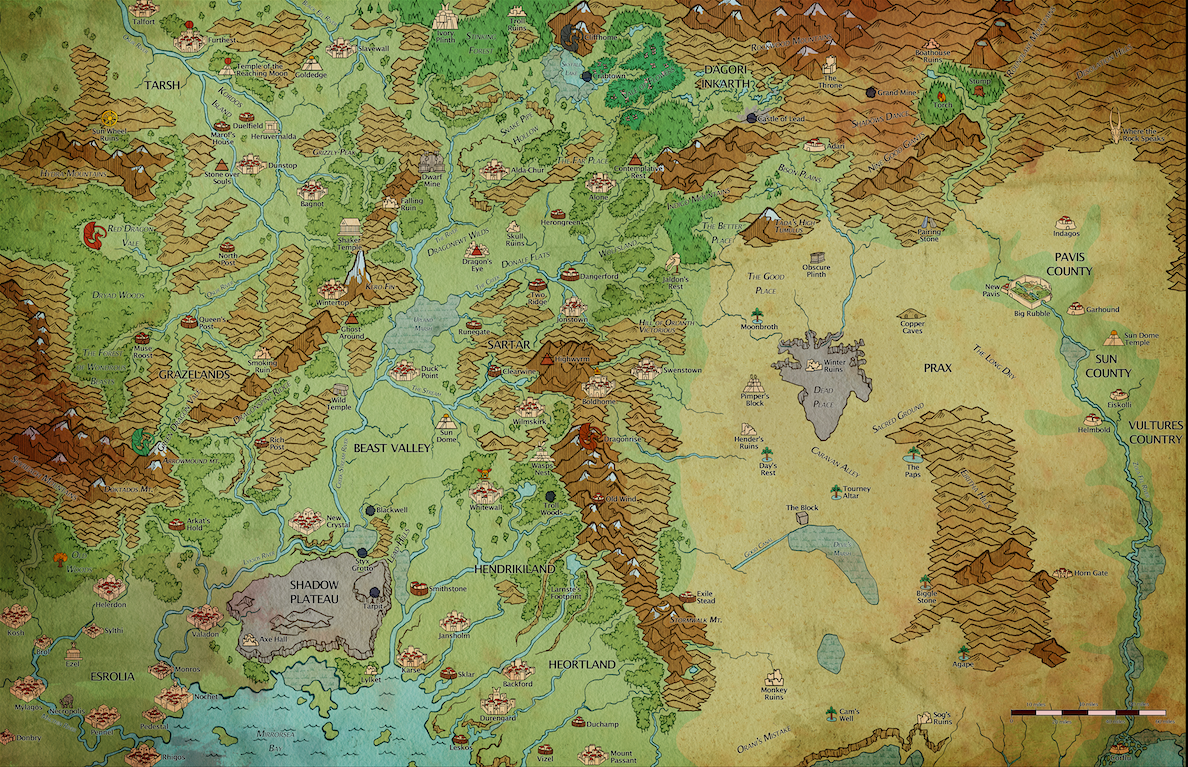 Some people have asked why the new edition is simply going to be titled "RuneQuest".

Internally, we don't call this RuneQuest 7 because we find that misleading. Mongoose RuneQuest 1, MRQ2, and The Design Mechanism's RQ6 share a common design thread from MRQ1, but the new RQ is simply not from that line of development. Instead, it stems from RQ2 (with elements of RQ3) and then moves on, but does not build off the MRQ line. Our internally referring to the project as RQ4 makes that point (I suppose it could also be seen as RQ 2.5). But referring to it RQ7 is, in our opinion, inaccurate and ultimately misleading about the edition's actual antecedents.

We're also disinclined to call the new rules RuneQuest: Glorantha, since for us RuneQuest=Glorantha. Other settings we publish will get their own tailored rules. BRP is a family of related, but not identical, rules systems - RuneQuest, Call of Cthulhu, Mythic Iceland, Stormbringer, Ringworld, ElfQuest, Nephilim, etc.

As an example, RuneQuest's magic - which in our opinion is a big part of its distinctiveness - is tailored for Glorantha, and frankly doesn't make a lot of sense in other settings (that's why Stormbringer didn't use it). So if we want to do a game set in the Byzantine Empire, the RuneQuest magic system would need to be entirely stripped out and replaced. Combat would need modifications, and so on. That isn't RuneQuest anymore but its own engine - similar but not the same.

We certainly don't want to do a half-baked treatment that results in us then having to revise away those portions of the core rules once we seriously start working out the mechanics for another setting.

The core rule book is focused on the greater Dragon Pass area - Sartar, Lunar Tarsh, Old Tarsh, Grazelands, Esrolia, and Prax. We are presenting this region in some depth than try to cover much wider areas in Glorantha with paper-thin superficiality.

As a real world analogy, if these were rules for gaming set during the Peloponnesian War, I'd likely want to include Greeks, Thracians, Scythians, Persians, and maybe even Phoenicians, as cultural groups, but would unlikely want to include Egyptians or Etruscans or Latins - let alone the Vedic peoples or the Zhou Chinese.

The cults presented are those prevalent in the Dragon pass area, including Ernalda, Orlanth, Seven Mothers, Yelmalio, Storm Bull, Waha, and so on. We'd much rather present the Malkioni with their own book so we can really explore their materialist humanism in depth, but I'm sure many people will be pleased to hear that there will be sorcery rules in the book (the cult of Lhankor Mhy uses limited sorcery)!