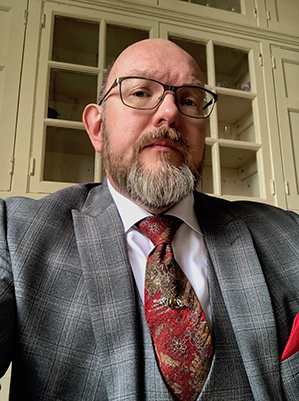 Mike Mason is an award-winning game designer and writer, and the creative director for the Call of Cthulhu tabletop roleplaying game. As well as being the commissioning editor and lead writer for the line, Mike also works closely with artists and cartographers to shape the look and art for Call of Cthulhu.

Around the turn of the millennium, Mike published The Whisperer, a zine devoted to Call of Cthulhu. In the intervening period Mike set up and ran the Kult of Keepers, a group of Call of Cthulhu scenario writers organizing games at numerous European tabletop conventions. Mike, no stranger to the arcane workings of games companies, previously worked for Games Workshop as Black Industries Manager responsible for the ENnie Award winning Warhammer 40,000 RPG: Dark Heresy, Warhammer Fantasy Roleplay, and board games like Talisman.

Mike lives in a curious village, south of Nottingham, England, and enjoys watching horror films, listening to ghost stories, and trying to appease his cat.

Prior to Chaosium, Mike co-authored Dark Heresy the Warhammer 40K RPG, and was commissioning editor and developer on The Inquisitor’s Handbook, Disciples of the Dark Gods, Purge the Unclean, and the Dark Heresy Game Master’s Pack and Character Folio.