Last weekend Jeff, Jason and Neil of the Chaosium team attended Chimériades, the boutique gaming convention at Château de Buoux in Southern France. Also in attendance was the original "Rune Czar" himself, Ken Rolston, part of the RQG development team.

Guest reporter Andrew Jones was on hand to report on what Jason, Jeff and Ken had to say about how things are coming along for RQG:

Andrew writes: So I took a few notes from the Chaosium seminar at Chimériades convention in the beautiful South of France countryside...

There was some discussion on RuneQuest core book- which they hope to open pre-orders later this month [more likely early next month - MOB] - which is as detailed a date they were willing to commit to; with the aim of a Gen Con launch. A black-and-white print-out of the laid-out book was circulated at the con and it does look beautiful and evocative. The core book will have a conversion guide as an annex for previous edition adventures to be adapted and run under the new rules.

Jeff believes that the RQG core book looks more beautiful than the Guide, and that there were more artists available with a feel for Glorantha. The art is designed to reflect and enhance the uniqueness of Glorantha.

The RuneQuest Bestiary is entering layout - it is a simpler layout than the core book, so it will go to production at a faster pace. One challenge is making stat blocks more interesting

Some 150 different RQ creatures are covered including dinosaurs and mega-fauna. 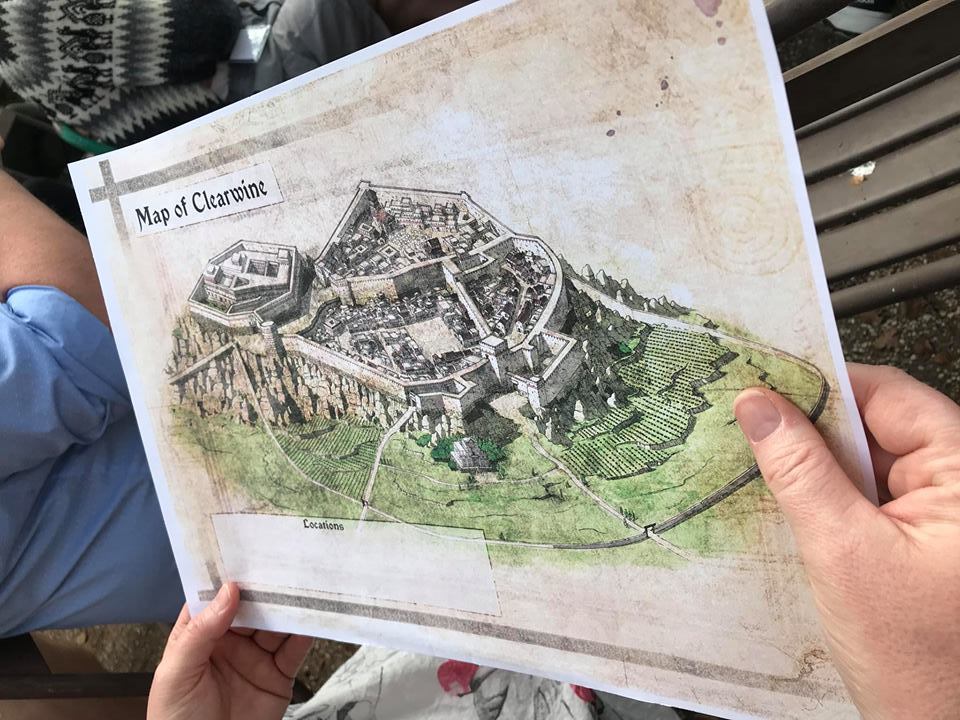 Next up is the GameMasters Pack- which is really a setting pack - a Colymar sandbox setting with 3 adventures which can be linked or play separately. Some 100 pages with lots of statted NPCs which can give GMs template for what a Clan Chief may look like stat-wise.

An impressive map of Clearwine by Oliver Sanfilippo was circulated to help GMs and players visualise locations. A map of Boldhome will appear in the (later) Dragon Pass campaign pack. Oliver's cartography is also in the core book.

The GM's book will also feature magic items, guidance about treasures, and Heroquesting and Hero rules.

The default setting starts in 1625 to early 1626. Apple Lane will be a default base for players for this post-1625 setting, reflecting the power vacuums following the Dragonrise. Apple Lane buildings have housing maps to help give the feel of a base for players.

There are 12 books in advanced production to support RQG - reflecting the work of the past 2 years. The new edition will be well supported to help time-pressed GMs to run adventures for groups. Source books will be statted for RQ, as it will be easier for HeroQuest Glorantha GMs to adapt than the other way round.

Gods of Glorantha will feature 50 gods with 8-12 page write ups of each cult. Orlanth will be expanded in coverage. The Red Goddess will be featured, with new Lunar magic. It will be a very God Learner book and designed for GM to use. The Invisible God will be covered in a separate project. More regional gods will be covered in regional sourcebooks - such as Pavis - Jeff ran a Big Rubble scenario at the convention.

Jeff explains that he goes back to the oldest Greg sources and then works out what to keep or reject. Keen for returning players feel comfortable with Glorantha.

Chaos gods are not PC gods so will not be in Gods of Glorantha. A separate gods of chaos pack with scenarios for GMs is being worked upon.

Sarah Newton is at the advanced draft stage for Barbarian Town - Wild West themed bronze age- opens up mixed group of PCs. And another project by Sarah will be announced when it is further along.

And finally on RQG, Jeff opened up a little on the heroquesting rules, building package of rules that come after a PC has heroquested and become a Hero with capital H. There will be a toolkit of myth structure/special effects to reflect heroquesting and be guidance on handling rewards and heroquest gifts. Powers have Mythic restrictions and obligations: the hero should be embarrassed to use the power outside of the key needs (Ken Rolston was animated on this point).

The Hero is not necessarily super-skilled, and not always effective: think of the Greek myths. Developing an immortal self leads to a second stat block, where the Gifts and Powers come from. This is a depletable resource, recovered through GM tasks and by being Hero-worshipped: they have to develop their own cult and community of followers. For example, Harrek is worshipped by communities to keep him away; they don’t want a visit from the Beserker(!)

—many thanks to Andrew for this report!

Sign up HERE to be informed the moment the RuneQuest: Roleplaying in Glorantha comes on sale! Buy the PDF, get the full cost of the PDF off when you buy the hardback later this year. And as a special bonus for signing up now, we'll also give you exclusive early access to downloadable RQG content (art, wallpapers, the RQG character sheet) over the coming weeks!