The story so far... The party and Itara’s caravan moves slowly north towards the city of Boldhome. Trading goes poorly, but the caravan’s luck turns during a visit to the ruins of Whitewall. Though the fortress of Whitewall has been abandoned after a recent, disastrous siege, it is still an important holy site. The group comes across a warband led by tribal King Saranthos. The king offers the caravan hospitality and the caravan agrees to provide entertainment. That night Kitha plays her flute and Selkana dances. They are able to inflame the already raucous warband into a drunken revelry. Selkana even encourages several of the warriors to engage in an oil wrestling competition. The warriors feel inspired for the upcoming battle and Itara’s caravan is able to sell much of its wine and oil to them. Selkana is invited to dine next to King Saranthos and from him she learns that Argrath has lit the Flame of Sartar and has been declared the regions rightful sovereign.

Ellie: We did not have a clear plan for where this campaign was going. It was this scene that defined Selkana’s whole story arc.

Scott: While dancing for King Saranthos and his warriors, Selkana rolled another critical. This came right on the heels of the pregnancy-inspiring dance critical that we talked about in our last post. Two dancing crits in short succession got Ellie and I thinking. You see, in Glorantha dancing is a signifier of the divine. A truly exceptional dance might be seen as the gods being physically present. If Selkana’s dancing was divinely inspired then perhaps her mission was as well. What if Selkana was more than just an ambitious castoff noble? What if she was god-touched?

Ellie: There are all sorts of stories that can be told in Glorantha. They span the range from humble farming communities struggling through another winter, all the way up to awe-inspiring battles between gods. We decided that we wanted to play in the big leagues. Selkana was no longer simply going off to secure some political arrangements. she was going to be the central hero of our own personal epic, and become a major player in deciding the upcoming apocalypse. 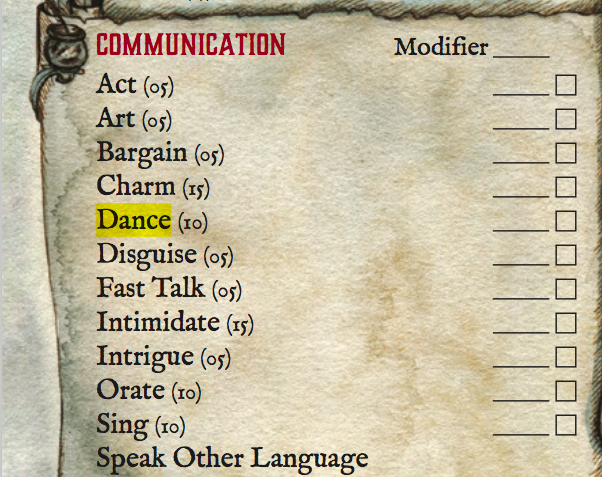 Scott: So, why was this the big “ahah!” moment for us? In retrospect, it’s clear to me that we were looking for some way to tie our adventure into the mythological background of Glorantha. Dance and music - Sing, Play (Instrument) - get explicitly listed on the RuneQuest: Roleplaying in Glorantha character sheet because they are incredibly important to the setting. Dancing is how the gods themselves did some of their most powerful magic. It seemed natural that Selkana, an aspiring priestess (and literal protagonist) would draw the attention of the gods. Selkana’s masterful dancing provided the opportunity to get them involved.

Ellie: We decided that while worshipping back in Nochet, Selkana had been given a vision. She sees a great white bull, breathing fire and igniting the holy Flame of Sartar in Boldhome. She sees herself dancing for the beast. This vision prompts her to gather the party and set out for Boldhome in haste, before the news of Argrath’s ascendence to the throne of Sartar has even reached Nochet.

Scott: This was a big deal for the overall direction of the game, but it also happened while we were entertaining an unruly band of storm worshipers who were prepping for some big unspecified battle. We spent a fair amount of time figuring out how that dancing crit went down with the audience.

Ellie: King Saranthos and his warriors are made up of mostly Orlanth worshipers. Orlanth is the husband of the goddess Ernalda, and mythically Ernalda empowers him by ceremonially arming him for battle. For these warriors, Selkana’s dance is effectively the goddess herself coming down among them. This is a highly favorable blessing and a good omen. They will no doubt see tangible benefits in the battle to come. King Saranthos is, in fact, so grateful that he presents Selkana with a rare and valuable power crystal in reciprocation.

Scott: So, yeah, that was the scene. Fairly short, in terms of gameplay, but hugely important in terms of our overall game. It was a ton of fun trying to work out what the dice were trying to tell us. I particularly enjoyed how we managed to help out the caravan by enticing the warband into buying out their entire stock of oil and wine. Always be hustling.

Ellie: I’m not going to lie, I loved the idea of Selkana manipulating these hardened warriors into have a wrestling match in a bunch of oil. Total power fantasy, that. Every game needs some of those moments.

Scott: Next time we’ll get in our first actual combat, and finally arrive in Boldhome! 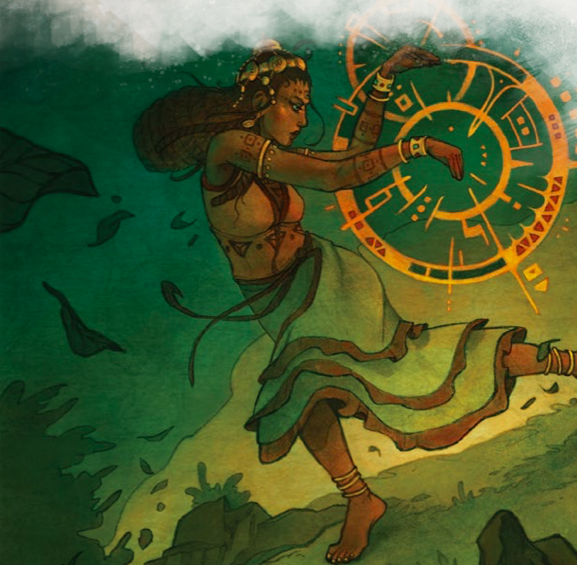