Diary #1: What to expect in the RQ Starter Set
Diary #2: Cover Art reveal, and what's inside the box

A Starter design choice: pregens rather than character creation

Once plans were made for the new RuneQuest Starter Set, we decided, after much discussion, that it would not include character creation rules. Though many starter sets allow the creation of new characters—including our own Call of Cthulhu Starter Set—an important aspect of creating new adventurers in RuneQuest is that it represents some creative effort and some decision making that is best done as a group, with the gamemaster at hand.

As presented in the RuneQuest rules, players learn about Glorantha as they create their adventurer characters – learning about the world, its recent history, how the Runes suffuse everything. With their family and personal history sections of the character creation rules, the players immerse their new adventurers into the world, with personal connections, loyalties, rivalries, loves, and even hates. The pages of the RuneQuest core rules walking players through character creation are filled with sidebars about clans, marriage customs, family relationships, ransom, guilds, and even sex and marriage!

For campaigns, this is an amazing resource, but for a casual introduction to the world, it’s a lot to process!

So, as with the Ennie award-winning RuneQuest Quickstart & Adventure, we decided to provide some pre-generated adventurers, a well-balanced group of ready-to-play Gloranthan heroes in the making.

We decided that rather than provide the same seven we had already used—Vasana, her half-sister Yanioth, their cousin Harmast, their friends and allies Vostor, Sorala, Nathem, and Vishi Dun—we would provide a new group of pre-generated adventurers to pick from, broadening the scope even more.

This time, we looked at what we had already presented with the iconic seven, then thought about the new ones we’d like to see, first starting with cults and cultures, picking some of the more popular archetypes we’d like to spotlight, broadening the initial group substantially.

We wanted a Chalana Arroy healer, a Babeester Gor Esrolian, a Yelmalio-worshiping Praxian, a Grazelander, a Storm Bull berserker, a Humakti, and a Eurmali. This new array hit all the high notes for us, and gave us a lot of variety and flexibility with the sorts of types of characters people like to play.

The next order of business was to flesh them out, so I sat down with the RuneQuest core rules, a fistful of dice, and some blank adventurer sheets, and rolled them up just as if they were player characters. In the end, I had the following batch of new adventurers:

One thing I enjoy when creating characters is digging into culture and also playing a bit against type, to demonstrate the wide range of possibilities and explore the freedom of expression Glorantha presents.

It’s rare to have a bandit-oriented character, so Dazarim is just that, the descendant of a famous Sable bandit chief, a daring outlaw and nomad, charismatic and deadly. Due to a freakish run of dice in his background rolls, he took part in nearly every major event in recent Praxian history.

And while the “dumb barbarian” is a classic trope, it seemed a welcome change of pace to make our Mago the Fierce a highly intelligent Storm Bull. Rather than the foaming-at-the-mouth sort of berserker, his is a cold fury, every bit as dangerous.

All the pregens get adventurer portfolios – here's Mago's: 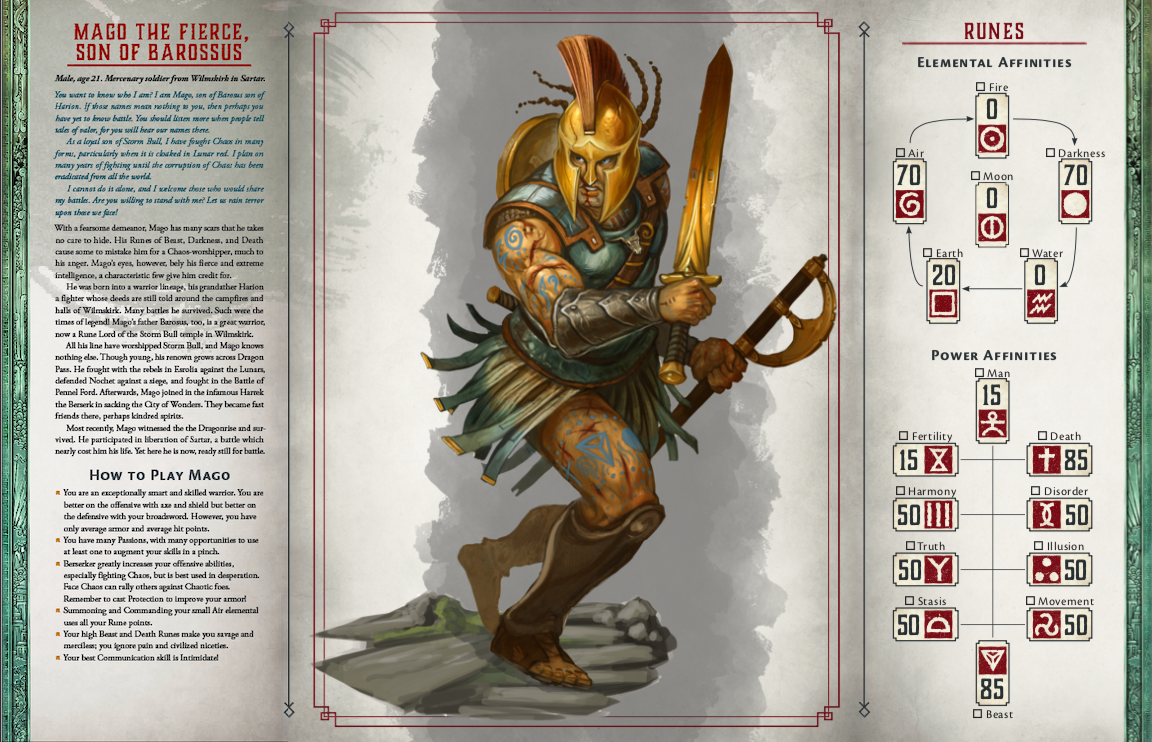 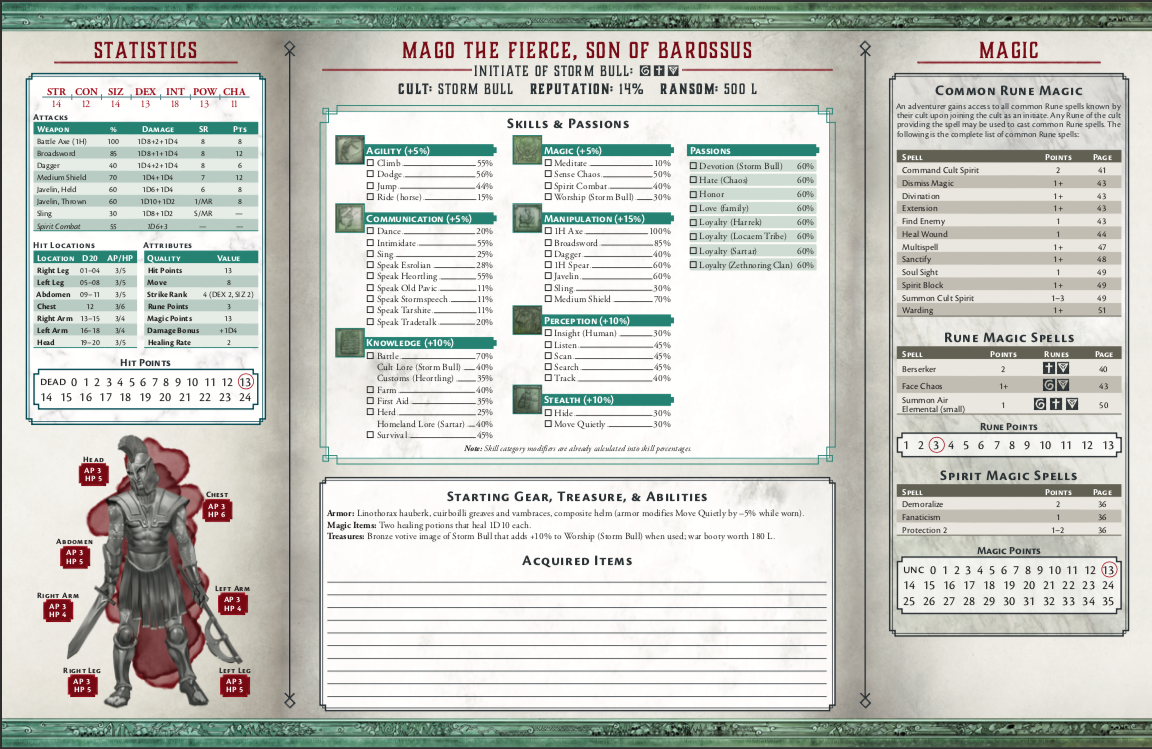