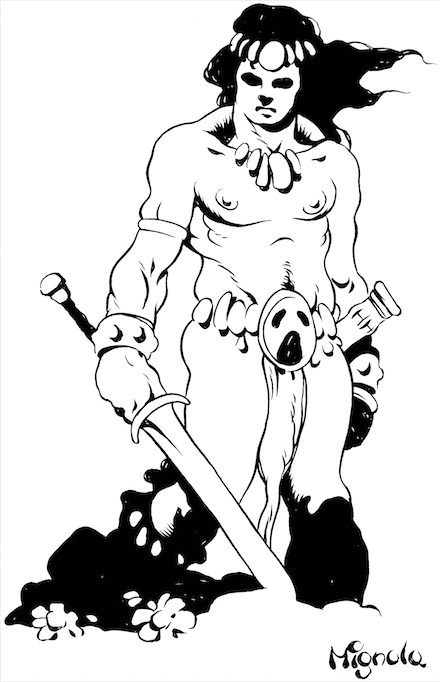 On Zeroes to Heroes

We all know the classic RPG trope - we make a character based on a concept, but when we first start playing them, they generally suck at doing anything. We fumble along through "low level adventures", fighting trollkin or rubble runners, until we've gained enough experience that the character can do the sort of stuff we imagined when we first created them. Only now we are really gaming - but oops! Real life has interfered and the campaign is on hiatus. Sigh.

I hate the "zero to hero" trope - if my character has fought in several battles, let me have the skills that correspond with a veteran warrior. Or if I want to play a priest, give me a reasonable chance of getting there in not too many game sessions. If I want to play a newbie kid just out of initiation, that's fine too, but in Greg's Harmast stories, Harmast is already capable of some pretty impressive deeds during his initiation (as is Lokamayadon, and we all know that Argrath killed four men right after his initiation - just read the comic!).

Another more prosaic issue - time. Back when we all lived in Seattle, David Dunham, Neil Robinson, and I used to game weekly come hell or high water. Nowadays, I do good to game every other week - and I consider myself lucky. We just don't have the time to be able to crunch out long zero-to-hero arcs.

The new RuneQuest is going to reflect that bias. If you want to play a "beginning" character, fine - but if you want to make a weapon master, you can! There's a good chance that a character starting in 1627 has already participated in several major battles, and may already have made a name for themself. As a result, a character's best starting skill is often in the 80%+ range. Frex, a Sartarite veteran warrior starts with a broadsword of 20% (with cultural modifiers). To that add a +15% Manipulation bonus. Our character is a veteran of a light infantry unit, so add another 25% to her broadsword. That gets us to 65%. She decides to be an Orlanth Adventurous initiate, so she gets another 10%, meaning 75%. Finally, she chooses to put the maximum number personal skill points - 25% - into broadsword and bam! She starts at 95% in broadsword - she's a weaponmaster at the start of play!

Initially some people were shocked - it didn't seem right that a character could start as a master. I mean, aren't characters suppose to work their way up to being where we want them to be? After which the next question was, why shouldn't characters be able to start at the skill levels where the player wants them too?

But what if we were able to start a character in media res, having already already enough knowledge of the character's drives and loyalties to be able to safely skip The Introductory Phase?

Runes and passions are part of we accomplish that in the new RuneQuest. New RuneQuest characters start with a psychological element much greater than previous editions. Our exemplar Orlanthi decides to take Air at 100%, Moon at 40%, Movement at 85% (meaning Stasis is at 15%), and Death at 75% (meaning Fertility is at 25%). From that we know she is passionate, impulsive and violent, energetic, rebellious, and ambitious, but also ascetic, ruthless, and relentless - and that she has mystic tendencies. Already, I got a good idea how to play her.

But she also has a history - that's the other we get to "know" our character from the outset. Thanks to the Family Background History, I know that she is a Sartar Loyalist (with a Loyalty Sartar passion of 75%), she's got an Honor passion of 70%, she Hates the Lunar Empire at 60% (her father was devoured by the Crimson Bat!), she participated in the Liberation of Sartar (and was one of those who witnessed Kallyr Starbrow acclaimed as Prince of Sartar), and fought at the Battle of Queens after nearly dying from magical backlash in Kallyr's doomed Lightbringer's Quest. She's an experienced campaigner, who knows her way around a battlefield. I decide to add a Devotion to Orlanth passion of 60%, and I know this character. Why shouldn't a character who has already been through 4 years of war start as a weaponmaster?

(But let's say the I decide I want my character to be a farmer rather than a warrior. With the same stats she again starts with 20% broadsword, plus 15% Manipulation bonus. The Farmer occupation adds just +10% to broadsword, bringing it 45%. She decides to spend another +10% from her personal skills on her broadsword, giving her a starting skill of 55%. She knows how to use a sword, and can consider a life adventuring, but she's not a veteran, let alone a master. Instead she chooses to take on a capable and potentially highly prosperous role in her local community, with a Farming Skill of 95% and the ability to manage tenant farmers at 70%. She also decides to take Scan at 60% and even know a little bit of Bronze Smithing (55%). Particularly good skills since the GM has announced that this is going to be the Risklands Campaign, and the ability to manage a stead is even more important than the ability to fight!)

Now here's a secret - you could always create such experienced characters in RQ3. A 27 year old barbarian warrior from Sartar started with 30% in broadsword. A +12% Manipulation bonus was pretty common for such characters (that's DEX 15, INT 13, STR 17), so now we are at 42%. Add 48% from previous experience and we are already at 90%. The difference is that this is pretty much all we knew about our RQ3 character!

Here's another point - RuneQuest combat is just plain deadly. Having a skill of 95% isn't going to stop you from being killed by arrows (although you should do really well in one-on-one duels). And letting characters start with a few high skills means that you can actually do most of the published adventures - and they are still going to be plenty challenging!