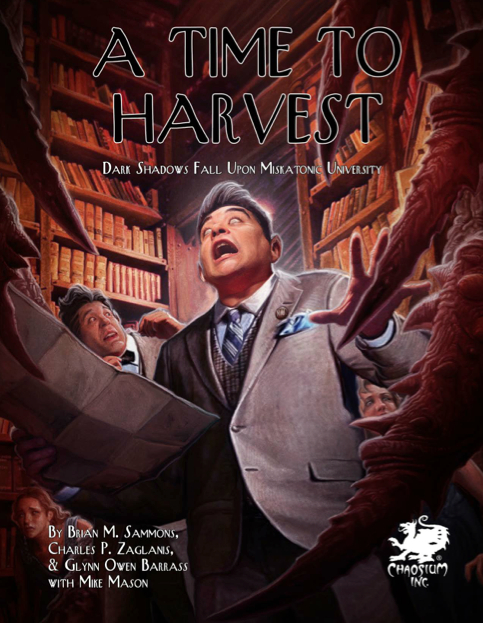 The final instalment of Chaosium's Call of Cthulhu organized play campaign was released to Cult of Chaos members today. Over the past six months, over 1200 Keepers have downloaded the six episodes, running A Time to Harvest in game stores, clubs, conventions, homes and online.

A Time To Harvest has been a tremendous success and I wanted to thank all of the members of the Cult of Chaos for their contributions in making the organised play campaign a wonderful thing to be part of. I’d especially like to thank those Keepers who have taken the campaign into gaming stores, libraries, colleges, and online - bringing the adventures of Call of Cthulhu to new players around the world. Your dedication helps raise the gamers oftomorrow!

Also, I’d like to thank Brian M Sammon, Glynn Barrass, and Charles Zaglanis for their work in designing and writing A Time To Harvest. Good Call of Cthulhu writing is all about helping people you’ve never met have fantastic adventures, scares, and fun, and this campaign has delivered those things in spades!

I’ll be going over the various feedback and suggestions over the coming weeks, compiling the campaign for its transition to print. I want to thank those Keepers who sent in their play reports - your input has and continues to be excellent. Once I have things ready, I’ll be passing the manuscript over to Nick Nacario to begin his layout magic and to commission new color art so we can produce a wonderful full color and hard back print version, which will be something lovely to have on your gaming shelf. Who knows, perhaps in the future, you’ll lead a new set of players (bright eyed and eager student investigators) to the quaint and brooding town of Cobb’s Corners so they too can uncover the rot at its heart and enjoy A Time To Harvest.

A Time to Harvest will be released as a full color campaign supplement in due course, incorporating feedback from the organized play campaign [update: here it is!]. The organized play version is available for free download for Cult of Chaos members.

Chaosium will launch a new organized play campaign for Call of Cthulhu in the first half of 2017.