Our goal is for Wyrms Footnotes to be a place where we can regularly publish articles, maps, short scenarios, background, fiction and more, exploring Greg Stafford’s World of Glorantha.

The magazine includes regular columns, feature articles that may be thematically related, and fiction.

Each issue of Wyrms Footnotes is overseen by a special Guest Editor. Guest editors may or may not be Chaosium staffers, but all share a deep and abiding love and passion for Glorantha. Guest Editor is an honorary position, and is by invitation only.

Wyrms Footnotes is 64-96 US letter sized (8.5 x 11) pages, with a color cover. The internal pages are greyscale. The magazine will be available as a PDF from Chaosium.com, or in print via POD. 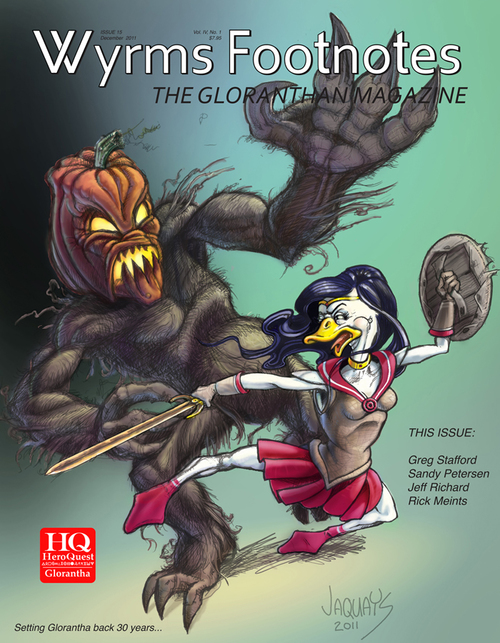 Wyrms Footnotes #15 is available as PDF from Chaosium.com and DriveThruRPG. Earlier issues are not currently available.

What We Want to Publish

We’re happy to consider anything Gloranthan that is well-written, playable and consistent with canon. Each issue will contain a potpourri of subjects relating to Glorantha and the Hero Wars. Certain issues may follow a particular Glorantha theme (e.g. ‘Goddesses of the Earth’, ‘The Lunar Empire’, ‘Great Battles’, etc).

The preferred length of articles is 500 to 3,000 words (one to six pages). Scenarios may be longer.

Wyrms Footnotes features regular columns by in-house Chaosium writers and line editors, and freelancers we are already working with. These columns include Editorial Ramblings, Notes from Chaosium (design notes), rules advice columns, and Dragons Past, chronicling the lead up to the new campaign start date, with a focus on events occurring 1621-1628.

In addition to our regular columns, we seek the following article types from contributors:

We need ready-to-run scenarios, especially those suitable for new GMs. The less preparation work needed the better. Scenarios can be either for a single evening of play or for multiple play sessions.

A close up look at a location in Glorantha. These could detail a village, shrine, wyter, tribe, clan, temple, tula, swamp, stream, or other notable place. Pick a place out of The Guide to Glorantha and let your imagination run wild. A cool map would significantly help the article. We have a number of cartographers available if you need improve your sketch map into something more professional.

One or more colourful Gloranthan personalities, usually from Chaosium published sources. Focusing on prominent or noteworthy figures of the Hero Wars. You may include game stats for the personage as well.

Gloranthan Bestiary. Describe a new creature, or provide a new information or an interesting take on something from Gloranthan flora or fauna.

Gloranthan mythology, cults, and heroquests. Could be centered on a single Hero, a minor deity, a great spirit, or a new perspective on one of the gods.

Describe a wondrous Glorantha item, a treasured something an adventurer might come across on their travels - buried in a chest, on the body of downed foe, or on display somewhere and just asking to be taken. It could magical, it could be rare, it could even be cursed.

Take a few of the rules that can be awkward to new GMs and explain how to conquer them with ease. Provide examples of what works well.

We are keen to publish original fiction set in Glorantha!

Other sections in Wyrms Footnotes include The Jonstown Compendium (Flotsam and Jetsam of Gloranthan lore), Rumors and Letters to the Editor.

We are NOT seeking submissions of the following types of articles:

If you're unsure about the process, or what you want to write about doesn’t fit into one of the above categories, please contact us to see whether we would be interested in publishing it.

RPG-articles and scenarios must be submitted using the current Chaosium edition of the rules for that game system. These are: RuneQuest - Roleplaying in Glorantha (coming late 2017, Quickstart Rules available July 1st), HeroQuest Glorantha, and 13th Age in Glorantha (coming mid 2017). We actively encourage you to present material for use with multiple systems from the above if you are confident in them.

“Your Glorantha Will Vary” is long-established principle in Gloranthan fandom. First espoused by the creator of the setting himself, Greg Stafford, in a nutshell what it means is you are free and welcome to take what you want from the incredibly rich tapestry of myth, magic, history and wonder of Glorantha for use in your own games. Your campaign is your campaign, but we aim for everything in published in WF to broadly align with that canon, and you should have that in mind when putting forward an article for consideration. The “official” canon for the world is found in material published by Chaosium/Moon Design Publications, with what is presented in The Guide to Glorantha as definitive.

All Submissions should be sent to wyrmsfootnotes@chaosium.com.

Your submission needs to be in .doc or .docx format, be your own original work, and never previously published.

No confidential relationship or other obligation of any kind is created or implied by Chaosium’s consideration of your submission. In submitting, you acknowledge that elements of your work may already exist coincidentally in either previous publications, unpublished drafts, or in the form of a work in progress at the time of this proposal. Chaosium agrees to consider your proposal as a possible step toward publication, and to maintain confidentiality about it, but makes no promise that publication can be expected or guaranteed.

We will acknowledge receipt within seven days, and try to respond within thirty days (but we will aim for a much shorter time). If we are interested in the submission, we may send you a contract for purchase. Note we may require that you make changes to the draft before we accept it (which is also when you can get paid).

If you’re asking what should I submit, read through the last few Gloranthan publications of ours, like The Guide to Glorantha or HQ Glorantha, or King of Sartar, and you will find endless possibilities. Entice us with adventure, history, and a new twist on those eternal themes. Plunder, Holiday Glorantha and Anaxial’s Ark are probably the easiest articles to have a go with, because they are likely to need the least input from Chaosium. Tales, cults and heroquests of heroes and minor gods are likely to need less Chaosium input than tales of the great Gods too.

Note: we do not pay for contributions to The Jonstown Compendium, Rumors Page, or other write-in sections such as letters to the editor.

Contributors will be paid via Paypal on final acceptance of the article.

All contributions to Wyrms Footnotes are ‘work for hire’ - when you get paid, you transfer full ownership of the intellectual property to Chaosium. Chaosium reserves the right to revise, correct, expand, or condense material, or reuse it elsewhere. You will be credited as the author. You will also receive one free copy of the Wyrms Footnotes issue featuring your work (print + PDF).

Advertising is available in Wyrms Footnotes. Ads appear in both the print and PDF edition, and can have a clickable hyperlink in the PDF version. Ad space is limited and preference is given to Chaosium licensees and commercial partners.

10% discount if you buy two or more ads in the same issue.
Please direct advertising inquiries to: wyrmsfootnotes@chaosium.com

Please fill out the comments forms below.