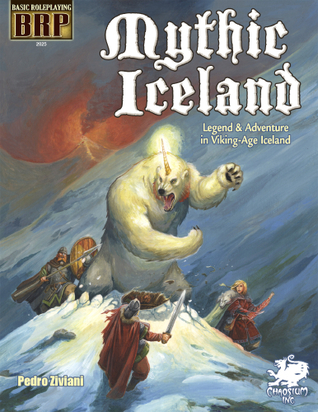 As first announced at The Kraken, Chaosium is pleased to announce that ENnie Award-winning author Pedro Ziviani is writing an updated and revised edition of his Mythic Iceland book for BRP. This will be the first release using the new BRP Essentials, the forthcoming 32 page booklet containing the core elements of the BRP system.

Interested in the orginal Mythic Iceland? Buy it here!

And while you are waiting for the next version, you can download and play two free adventures.

A Cold Death is an adventure for Mythic Iceland set in North Iceland, in the year 990, during the Pagan Commonwealth period of the country’s history.

Six warriors return to their home valley after two years on the longships. They find that the old goði (chieftain-priest) has been replaced by one of his followers, and that the valley where their farms are located is in the grip of an early and supernatural winter.

They near their home valley, laden with the loot of their years raiding. Their dragon ship is in the fjord, far behind them. The ship belongs to their goði Einar, sponsor of the expedition. Before they go to their own farms, they must journey first to Einar’s farm at the end of the valley—to give him his share of the loot, and to tell him about the death of his son.

As they journey higher up into the mountains they bid farewell to their shipmates who turn off to their own farms. Soon only our heroes remain.

What are the characters thinking about as they walk towards their home valley? Who are they longing to see? How do they plan to spend their money? And who will break the news to their goði Einar that is son Úlfur was killed during the raiding? It was a good death, but it is always hard for a father to hear news that his son has died before him.

The Night of the Yule Cat - Free PDF Download

This is a short scenario for Mythic Iceland, based on the old Icelandic myth of the Yule Cat, the huge and monstrous black cat that eats children who don’t have new clothes to wear at Christmas eve.

The story takes place during the Pagan Commonwealth period of Icelandic history, before the Christian conversion in the year 1000. As the story starts, the pagan player characters are preparing to celebrate the mid-winter festival of Yule (“Jól” in Icelandic), which is described in Grettis Saga as being a time of “greatest mirth and joyance among men.”