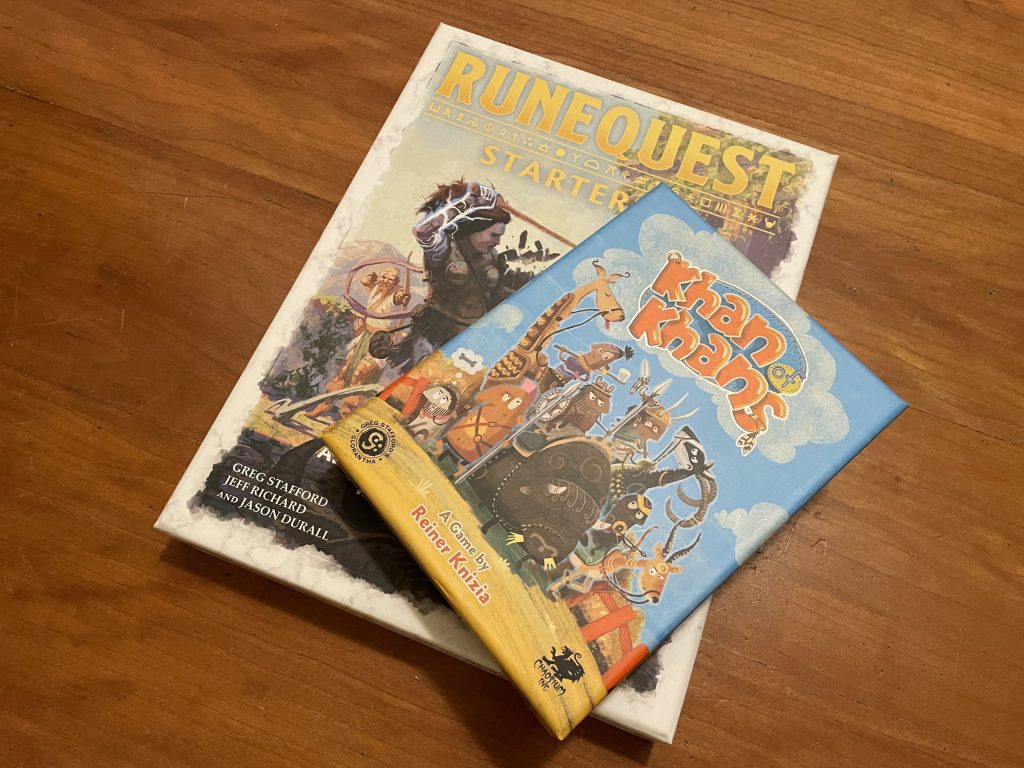 "Perfection in a Box: Chaosium’s RuneQuest team has nailed it! Raising the bar to new heights, they have put together a Starter Set that other companies can only dream of emulating. One with concisely written and focused rules, in easy to understand language supported by copious examples and just the right amount of lore to whet your appetite, yet enough to give you a firm sense of the world in which you are about to embark. It’s further bolstered by a SoloQuest explicitly designed to teach new players the rules along with three adventures intended to gradually build a player’s knowledge through experiential learning. And we cannot forget all the other goodies you get in the box as well. All of this at an affordable price!" — Rolling Boxcars.

"The RuneQuest Starter Set is a fantastic product... In my opinion, it sits firmly in the now triumvirate of the best RPG Starter Sets on the market today: Call of Cthulhu, Warhammer Fantasy Roleplay, and RuneQuest.

One of Chaosium’s goals was to make this product useful even for veterans of RuneQuest and Glorantha, and I think they have greatly succeeded here. Out of a total of 272 pages across all four booklets, there’s about 185 pages of new material, from the Jonstown write-up to the SoloQuest and adventures: that’s more that two-thirds of useful stuff for someone who already owns the core rulebook! The poster map of Sartar, the pre-gens, and the Strike Rank Tracker are just icing on the cake at this point!

My final advice is that the best “introduction to Glorantha” combo is to offer one gift for your RPG nerd friend, and one gift for their family: the RuneQuest Starter Set plus Khan of Khans* is your best bet at a successful summoning spell for your gaming table!" — Godlearners.

*We think this is a great idea, especially as the "udderly fantastic" double-ENNIE award winning Khan of Khans is currently on special: $12.99! 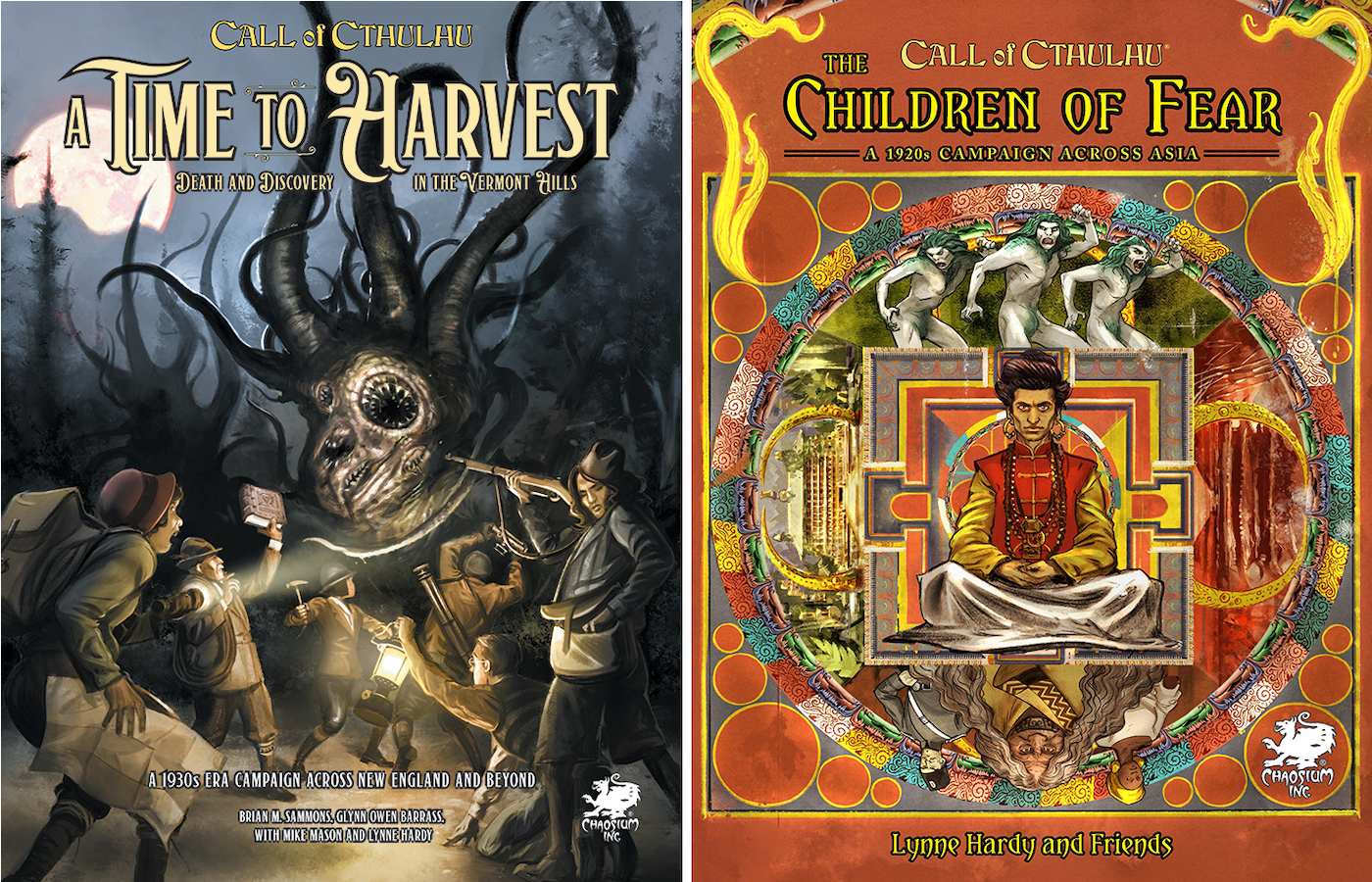 "A splendid 1930s campaign splicing some canonical locations with the latest and greatest of 7th edition goodness... An unexpected addition to the Chaosium canon, but a very worthwhile and rewarding one." — Paul St John MacIntosh, RPGNet Review of A Time to Harvest.

The Children of Fear

"Highly Recommended – The adventure delivers on all of its promises and offers the best of what Call of Cthulhu has to offer: historical accuracy, world travel, monstrous foes, cults, grounded reasons for investigators to go on supernatural adventures, and plenty of Keeper and investigator/hero support." — Charles Dunwoody, ENWorld.

"The Children of Fear is a fantastic campaign, full of twists and more than a few gut punches. Hardy has struck a fine balance between crafting an experience ready to play as written and allowing Keepers the chance to storycraft to their own tastes. 9/10". — The Gaming Gang. 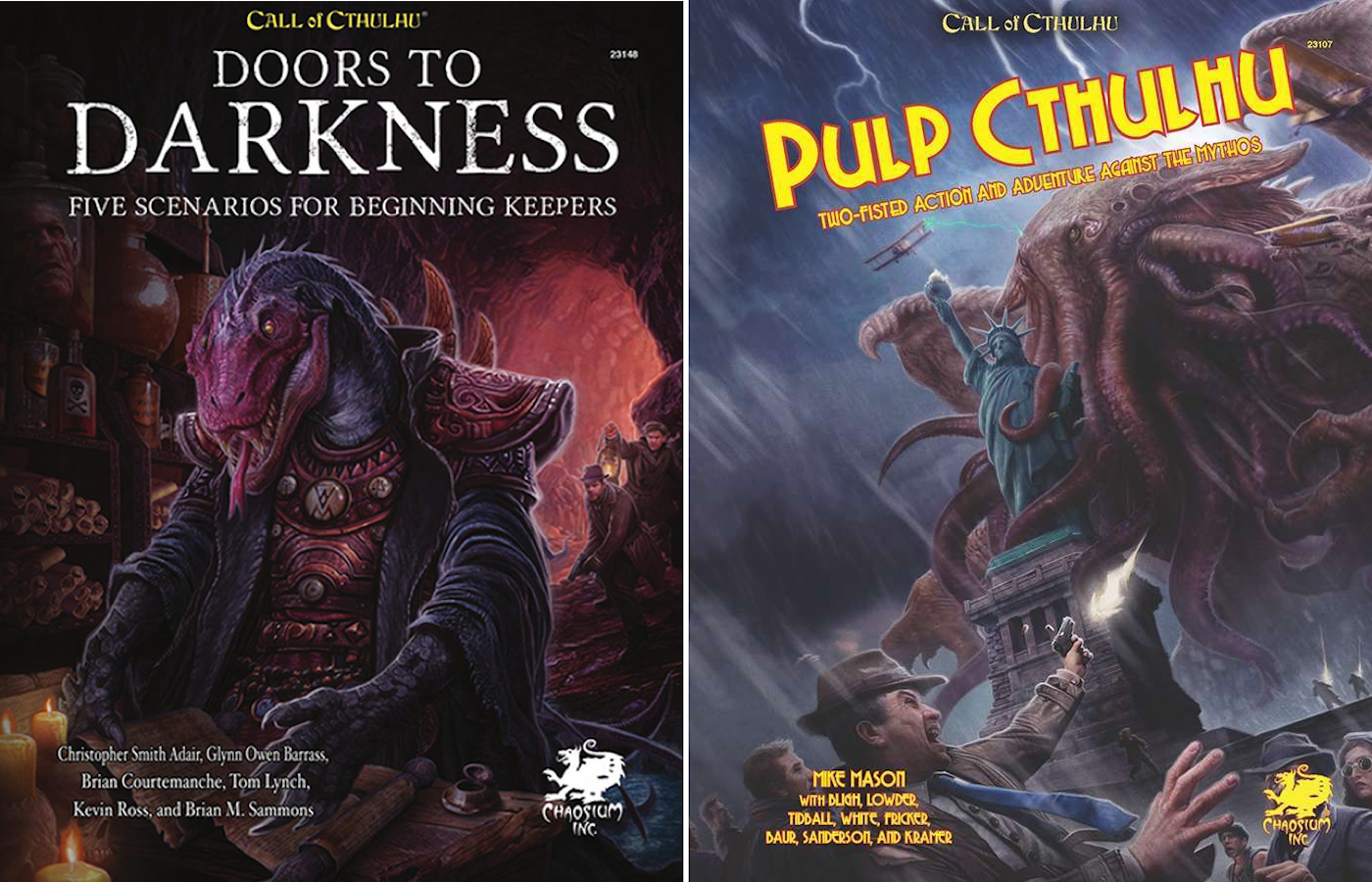 "The subtitle is “Scenarios for Beginning Keepers.” The intention here was to provide Keepers fresh to Call of Cthulhu five scenarios to run with extra training wheels. Even if you’ve been at this a while, I highly recommend this book. Primo stuff here." — Vintage RPG.

"Pulp Cthulhu is a hoot. PCs get amazing Talents, more hit points, and a wider stretch of Luck. But the villains get a boost too and as weird as Mythos monsters are, some of the supervillains are pretty darned strange also... To me, this is an essential Basic Roleplaying RPG set of rules. Get this book and punch the Mythos right in its tentacled face." — Charles Dunwoody, EN World. 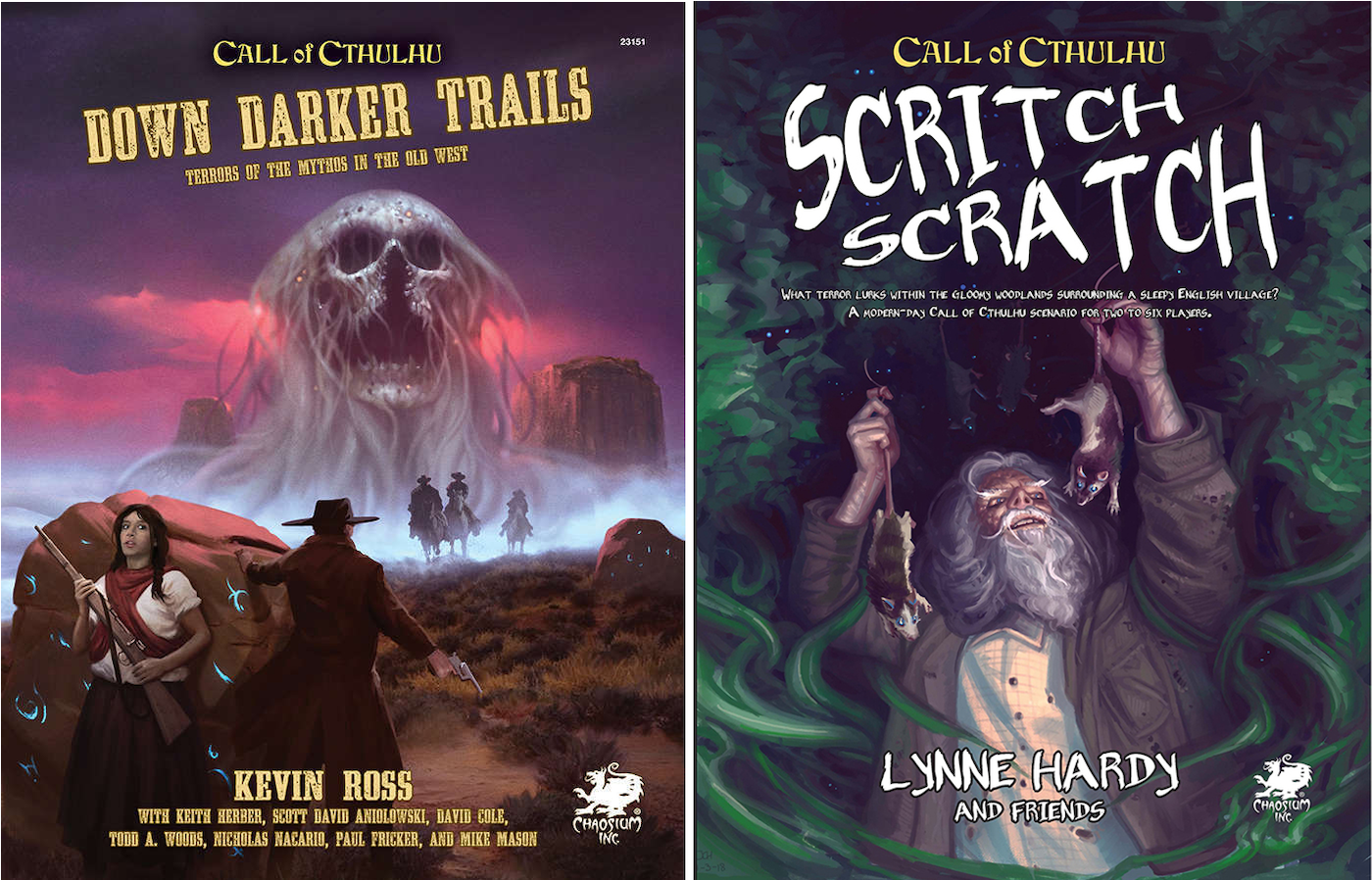 "Six-guns and pseudopods await your cowpoke... Keepers will be able to run a campaign for months in the Old West and never run of ideas. And Keepers could try different versions, whether Pulp heavy or Cthulhu light and other options in between... a unique Mythos setting of mesas and mi-gos that shouldn’t be missed." — Charles Dunwoody, Geek Native.

"Asks the question, “What Terror Lurks Within the Gloomy Woodlands Surrounding a Sleepy English Village?”... A pleasingly low key one-shot of bucolic mystery and horror." — Reviews from R'lyeh.

"Chaosium has pulled off some really breakthrough anthologies, in between creating superb RPGs. And this one looks like another winner. What an all-star cast of writers." — Paul St John MacIntosh. 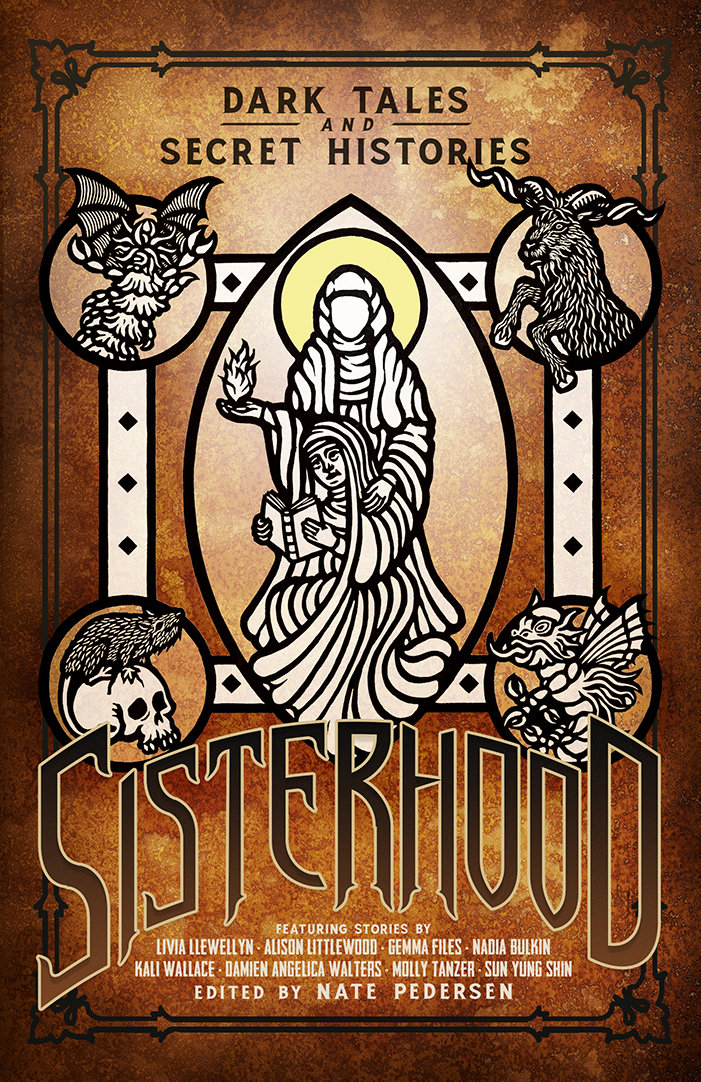