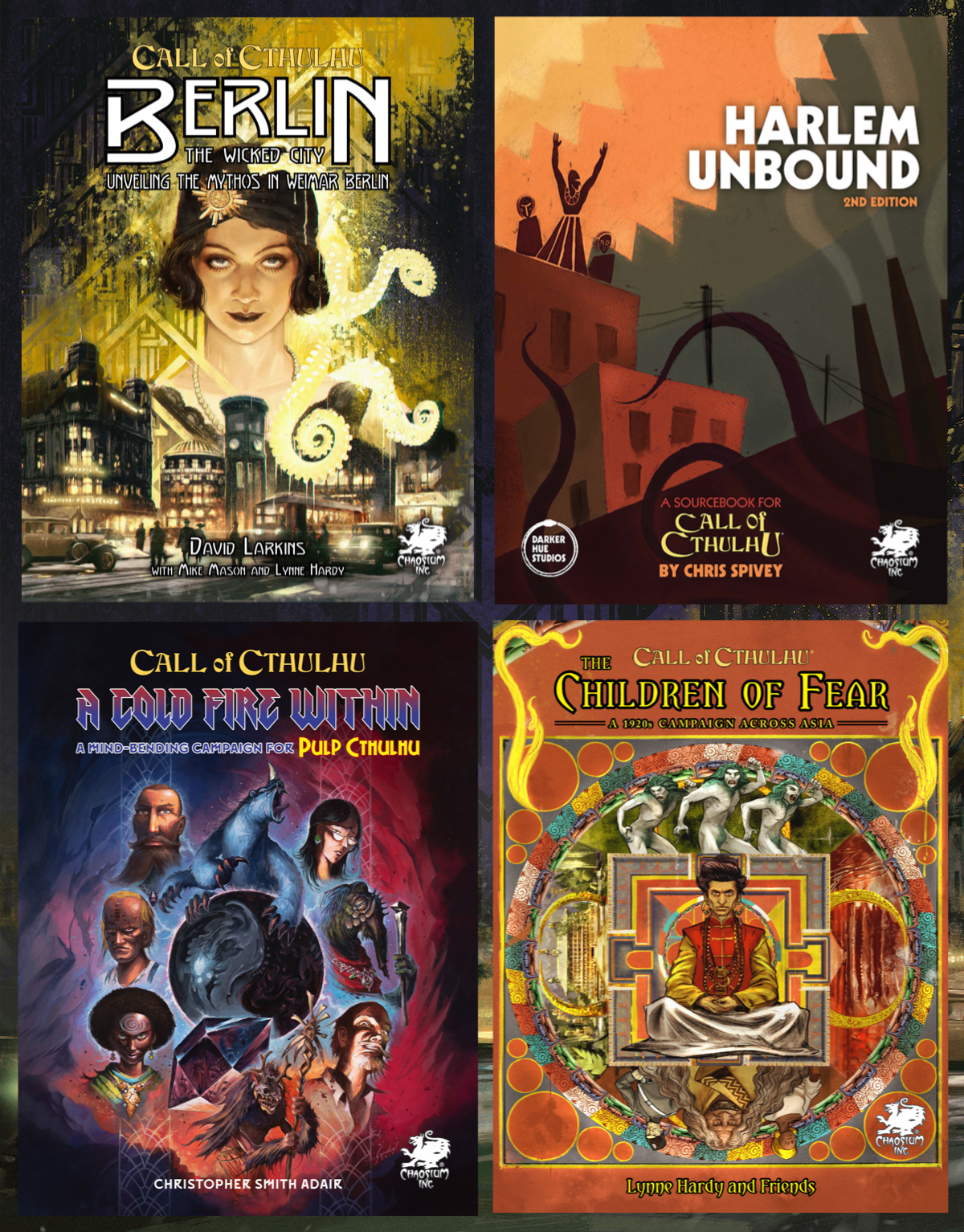 The 'Unnatural Selections' series is our regular round up of notable Chaosium reviews worth a look. Here's some critical commentary about recent groundbreaking Call of Cthulhu releases that "flip the script":

"I confess I’m blown away. Weimar-era Berlin (1919-1932) is a perfect setting for Call of Cthulhu, and I’m a bit surprised it took 40 years for someone to pitch the idea to Chaosium. David Larkins explains why he designed it:

“I feel like the city at this time provides an outlet for exploring particular modes of horror centering on themes of shifting identity, humanity’s capacity for depravity, body horror elements like mutilation and mutation, the collapse of ordered society, and the like. It is certainly not a setting for everyone, as it necessarily deals with issues of sexuality and hedonistic behavior that not every group wants in their horror games, but if that’s something your group is comfortable tackling, the experiences baked into a Berlin-centered campaign promise to be quite removed from your classic games. I also like to amuse myself by thinking that Lovecraft himself would have been repelled by the contents of the book! If the idea of partying with Anita Berber and Conrad Veidt, punching out literal Nazis, getting impregnated with yard-long owl-headed maggots, ducking the attention of gnostic Saturn-worshippers, matching wits with a coven reality-bending witches, being turned into a living doll, or foiling a Communist shoggoth sounds like fun — Wilkommen, Liebchen!”

A GM after my own heart. I used to design transgressive campaigns like this for AD&D, populating my scenarios with all sorts of demented elements that were, well, not to everyone’s taste... But the world-building of Berlin: The Wicked City is on such a staggering scale, and something I’ve rarely seen in any RPG supplement. The geographic and historical detail alone is worth the price of admission.

A full-scale color map of the city is provided, and keyed with important sites, many of which are zoomed-in throughout the module. Notable personalities, and plenty of real-world historical people, are given helpful bios and gaming stats. There is a section on crime and punishment, Berlin’s dark underworld, and the many political factions before Hitler’s takeover in 1933.

The section on LGBT issues is remarkably informative, and explains how people of unconventional sexuality can find a welcoming place in Berlin.

For RPG city supplements, Berlin sets a new bar. But how well is the gazetteer put to use? A Cthulhu source book is ultimately judged on the strength of its adventures scenarios—the application, in other words, of its own source material. Trust me when I say the three Berlin adventures are among the best I’ve seen..

Not only are the three adventure scenarios among the best I’ve seen for Call of Cthulhu, the detail provided for Berlin is on par with the best city modules or gazetteers for any RPG... Don’t wait. Buy it here. Rating: 5 stars out of 5."
— Loren Rosson, The Busybody. Full review here.

"An expansion of Call of Cthulhu, Chaosium’s wildly popular tabletop roleplaying game based on Lovecraftian lore... Spivey’s critically lauded expansion of the game is a landmark for both the tabletop roleplaying world and for Lovecraftian literature. It focuses on the Harlem Renaissance and assumes that all players, regardless of their real world ethnicity, will be stepping into the shoes of a black, indiginous, person of color in that time period. The book is an engrossing historical tome as well as a literal guidebook for meaningfully exploring racism in Lovecraftian fiction.

We’ll never have any shortage of the sublime. H.P. Lovecraft has shown us, deftly, how to summon it. Instead, Lovecraftian authors [such as Chris Spivey] are discovering new ways to tap into the beauty that he flirted with, but seldom gave into transforming his hate into more meaningful stories than he ever could conjure. From the rot and putrescence of his prejudiced heart, glorious things are blossoming — awe-striking in their resplendent multifariousness."
— Cat Blackard in Consequence of Sound. Full review here.

A COLD FIRE WITHIN

"Author Christopher Smith Adair has tapped into Theosophist ideas, Hollow Earth theory, various types of spiritualism, some weird science, and even America’s pre-WWII flirtation with fascism... this is more Indiana Jones punching Nazis off an exploding dirigible than it is John Trent’s dawning realization that reality isn’t what it used to be, even if Sutter Cane’s books suck.

What he’s made reminds me of reading Mike Mignola’s Hellboy comics, which are themselves rooted in Lovecraft and in the Pulps. I’m not going into the story or plot developments here, but it gets weird. Really, really weird... Depending on how things go, you could be dealing with time travel, astral projection, the Dreamlands, ancient super-tech, lost civilizations, and more.

This was made for Pulp Cthulhu, the expansion/variation of the classic roleplaying game that really, really leans into the Pulp sensibilities. I’m pretty excited about the idea of running this... I think running something so unabashedly Pulpy, with elements of King Kong, Disney’s Atlantis, Edgar Rice Burroughs’s Pellucidar stories, Hellboy, Indiana Jones and more looks like a ton of fun."
— Matthew J. Constantine. Full review here.

THE CHILDREN OF FEAR

In a campaign of this kind, ranging from China in the turbulent 1920s along the Silk Road to Tibet and colonial British India, questions of colonialism and racism, not to mention cultural appropriation, are almost sure to arise. All I can say is that Lynne Hardy and her fellow writers have done an extremely sensitive, painstaking, respectful and even reverential exploration of the traditions and cultures involved, even when they’ve turned a dark mirror to some of their most alarming aspects to create the villains of the piece. Almost every creed or social fabric is presented on its own terms, whether the strictures of the Hindu caste system, or the extremes of Tibetan Bon lore – in authentic terms that nonetheless will at times push your Culture Shock meter up to 11. Racism in the British colonial context is presented unflinchingly, with no attempt to handwave or airbrush over its impact on the campaign. Players will definitely encounter seriously adult content, sexual as well as horrific, but that is suitably signposted, with plenty of warnings for Keepers to secure player buy-in and ensure that no one’s consent to participate in such sections is overruled...

..this is a gem and an instant classic. Players could wander through this campaign for years and still not come to the end of it; and very probably they wouldn’t want to leave. Unreservedly recommended."
— Paul St John Mackintosh. Full review here.