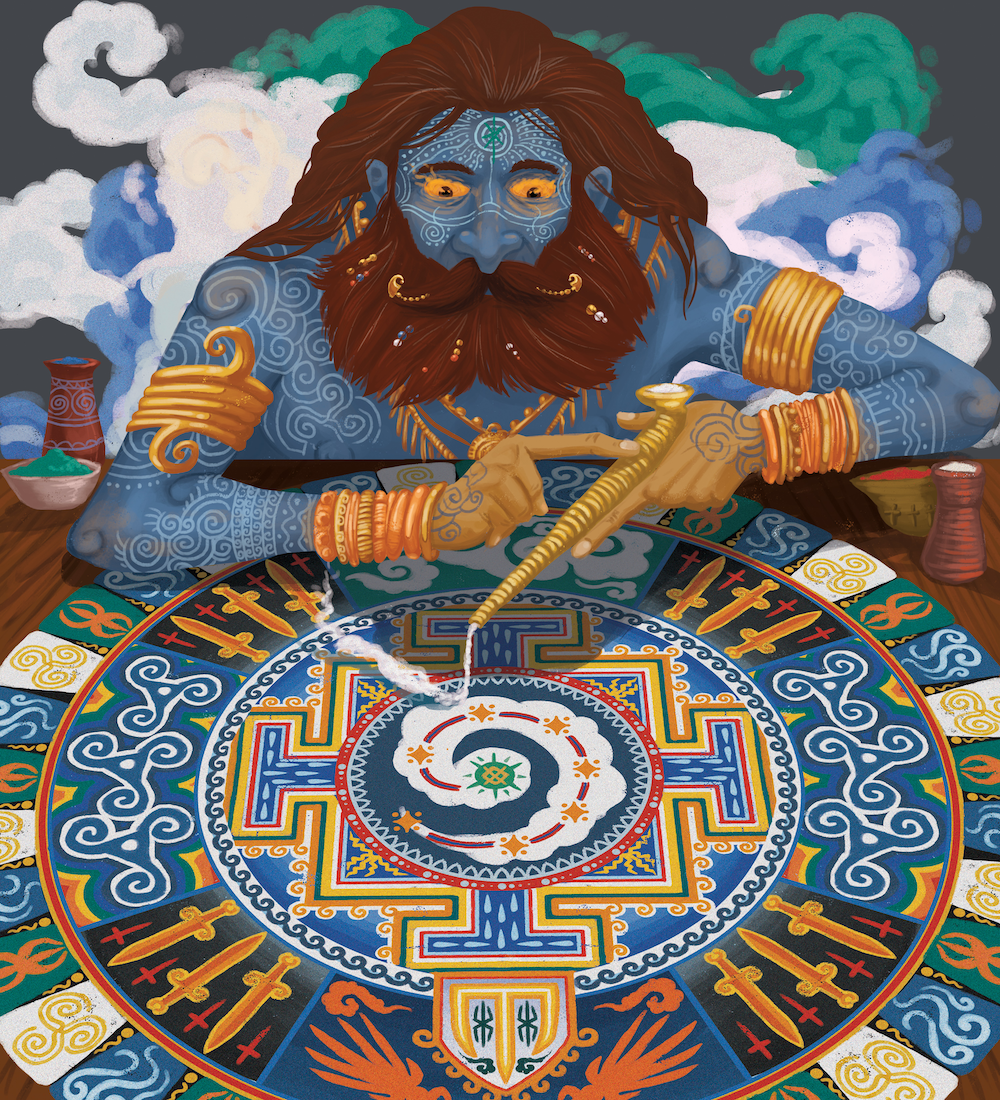 The Red Book of Magic is the latest release for the RuneQuest RPG. It expands the rules for Rune and spirit magic, and catalogs more than 500 spells amidst its 260 pages.

While the final product is the perfect addition to any RuneQuest player’s library, The Red Book of Magic had a much more humble beginning.

We sat down with Jason Durall—the Creative Director of RuneQuest—and Jaye Kovach—Art Director for The Red Book of Magic—to chat about how this epic, arcane tome came into being. 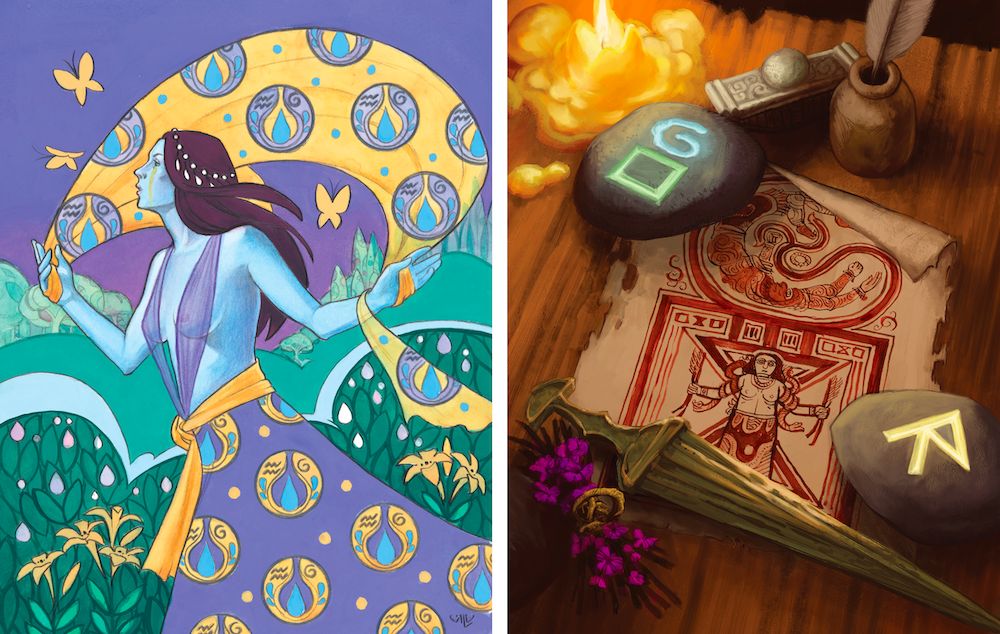 Birthed from the Cults

As Jason explains, when Jeff Richard—Creative Director of Glorantha and primary RuneQuest author—was working on the yet-to-be-released title Cults of Glorantha, there were so many new spells he found that he needed a separate document to catalog them all..

That catalog quickly became very, very big. What Jeff didn’t realize at the time was that he was building the foundations for The Red Book of Magic.

“It made sense that The Red Book of Magic—published separately—was a perfect table reference,” said Jason. “It became clear that this was the most practical book to get out during a game, and we chose to make it its own thing.”

Once that decision was made, The Red Book of Magic was fleshed out with the rules for spellcasting. Pre-existing spellcasting rules were clarified, and a lot of feedback from the core rules was incorporated along with minor corrections.

“Jeff also put some pieces there that he’d always wanted to include that didn’t really have a place in any other book,” Jason said, “like Hephereones’ Statement on Magic.” 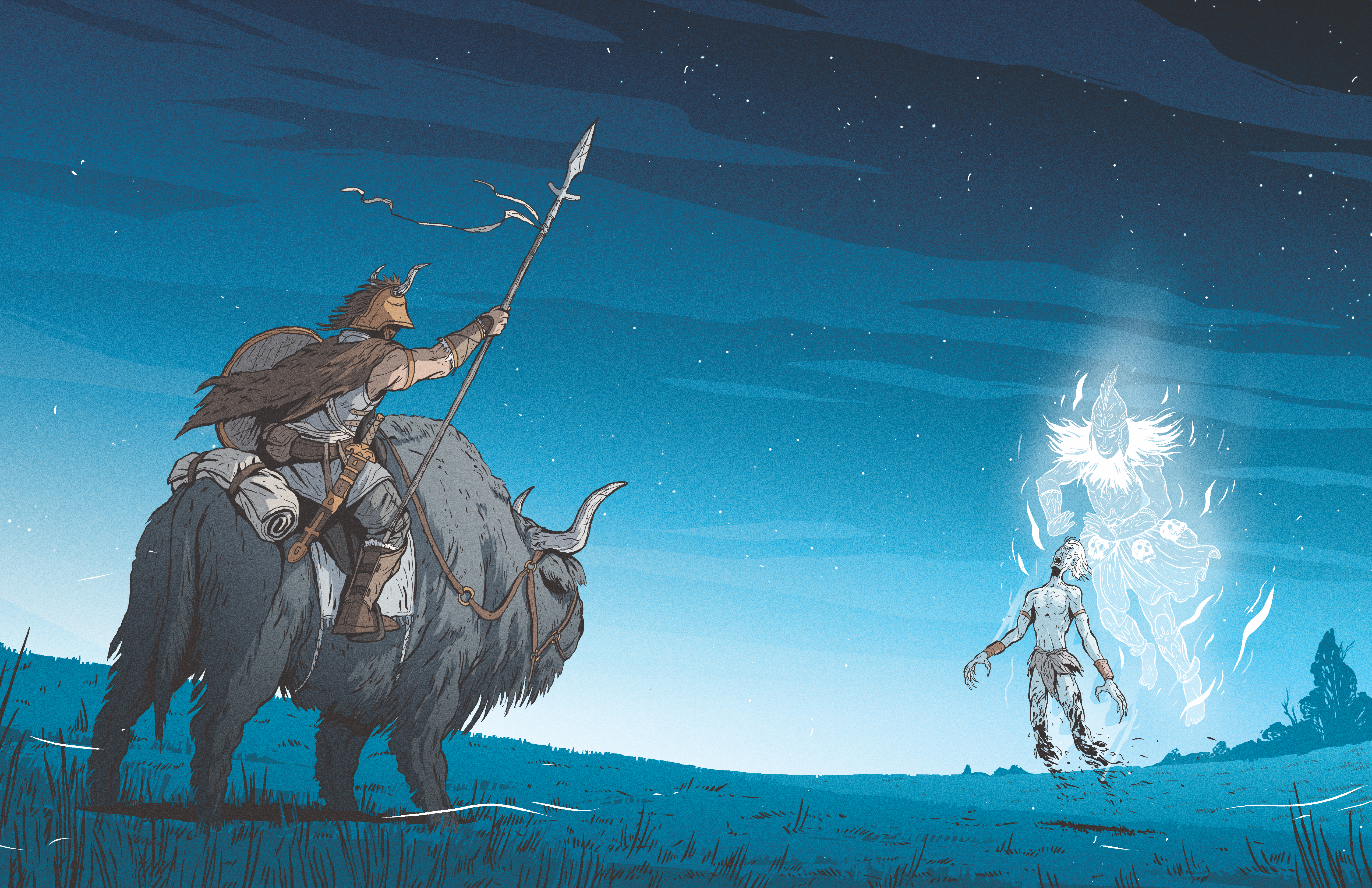 With previous titles The Pegasus Plateau and The Smoking Ruin, the visual style of RuneQuest had been very much focussed on showcasing exciting scenes from the adventures presented in those books.

“The Red Book of Magic posed a chance to better showcase the diversity of Glorantha and its denizens,” said Jason. “It was an opportunity to present how myth and magic are completely entwined, highlight unique magic users, and focus on the panoply of rich visual culture in Glorantha.”

Art direction for any roleplaying book is a herculean task, let alone for a game with as distinct a style, theme, and mood as RuneQuest*.

“The team goes to every effort to make sure all art for RuneQuest is accurate to Glorantha," Jason said. “This includes lots of photo references, very long and detailed art briefs, and more than a fair share of Zoom calls!”

With Chaosium staff artist Kalin Kadiev currently fully-tasked on art direction for the RuneQuest Starter Set, the team brought in new blood to work on The Red Book of Magic. Jason and Jeff approached Art Director Jaye Kovach, who had most recently worked on Cyberpunk and The Witcher RPGs for R. Talsorian Games.

Jaye got in contact with previous RuneQuest artists, and she brought a range of new talent into the fold. The result was the most diverse group of artists—26 in total—than any other RuneQuest title thus far. 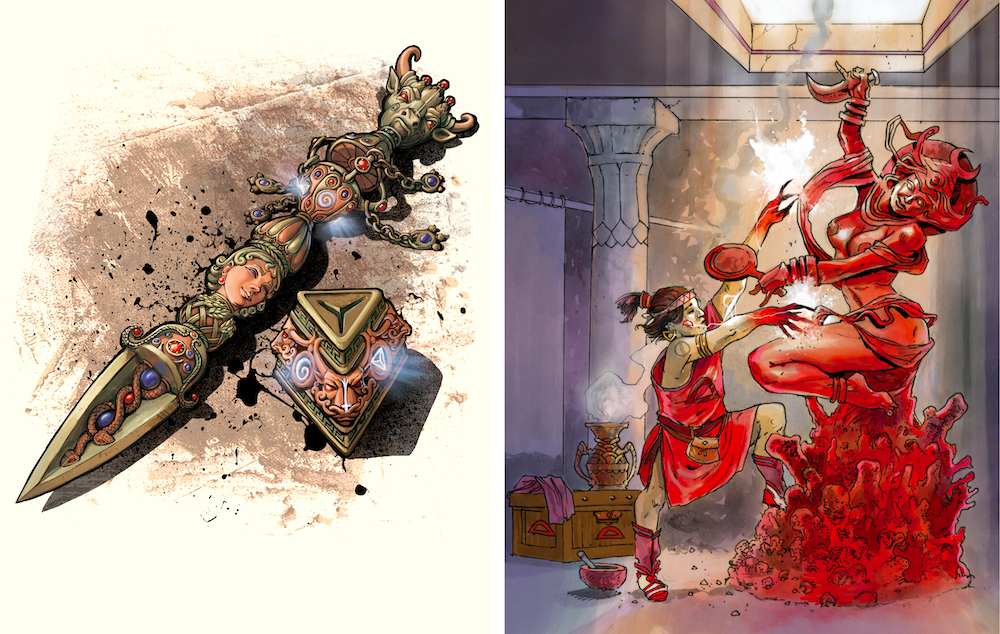 Although, for Jaye, the development wasn’t without its own difficulties:

“The most difficult thing about art direction for this project wasn't the 30-plus years of game history that must be understood to meet expectations of an intelligent audience who lives and breathes this world. Nor was it the scores of high quality, beautiful, and creative illustrations produced by many artists who I consider Gods of this industry—The hardest part was getting started.

“As I hung up from our first amazing call with Jeff and Jason, I realized something was seriously wrong. I physically could not stay up any longer. I lay down in my bed, and spent the following 2.5 months there—having contracted COVID-19.

“Both Jason and Jeff graciously waited for me to heal and were patient as Aron [Jaye’s partner who worked with her on The Red Book of Magic] and I learned about the game. I literally crawled back to health slowly. Day by day, I did a little more to build my strength.

“That included spending time each afternoon working on Art Direction for The Red Book of Magic. Everyone seemed to understand the life and death struggle I was in and they were so supportive. By October, I was still weak but my mind was sharp. Aron and I had muscled through and persevered. We had a nearly complete book for RuneQuest to show for it.”

The cover was its own beast. The late and great Greg Stafford was a huge fan of Mark Smylie’s work with the Artesia comic series, as were Jeff and Jason. They contacted Mark to see if he was interested in doing the cover of The Red Book of Magic. The final result (below)—a depiction of the adventurer Yanioth manifesting the Earth Goddess Ernalda—really does speak for itself. 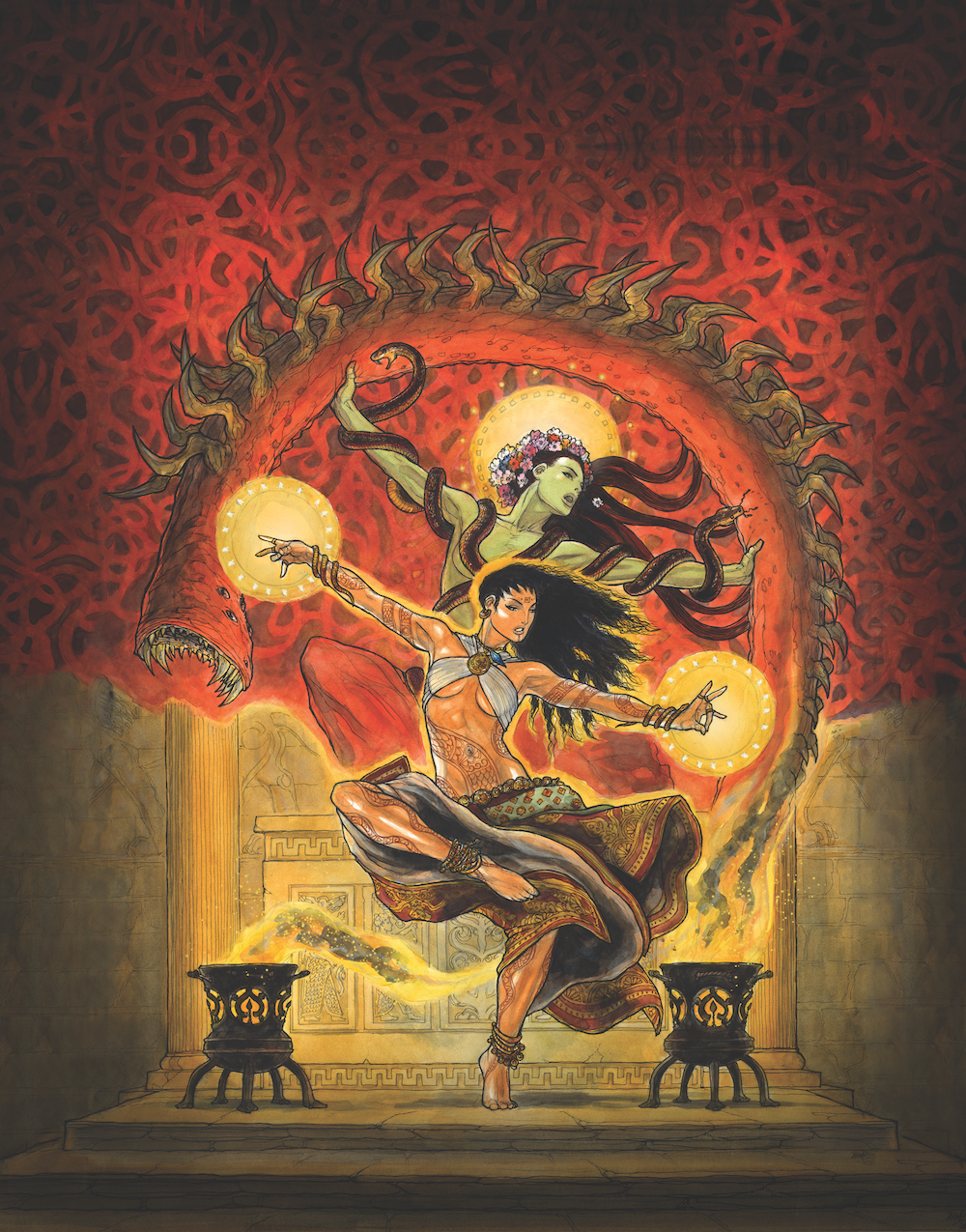 The Red Book of Magic grounds players in the setting with an understanding of what magic actually is and how it works in Glorantha. Two sections of the book are devoted to the look, feel, and manifestation of magic, with a focus on the semi-divine nature of Rune magic to help emphasize the epic nature of that kind of spellcasting.

“The book also includes clear cut clarifications of rules which are set to help new players as well RuneQuest veterans who may need to unlearn some rules from older editions of the game,” Jason said. “Of note, one-use spells and the Extension spell have been fleshed out so their rules are as clear as possible.

“Rules for things like Rune metals were previously only available in the RuneQuest Gamemaster Screen Pack, and have been added to The Red Book of Magic to give players easy access. Additionally, a section on healing plants is brand new, and considerably expands the Plant Lore skill.” 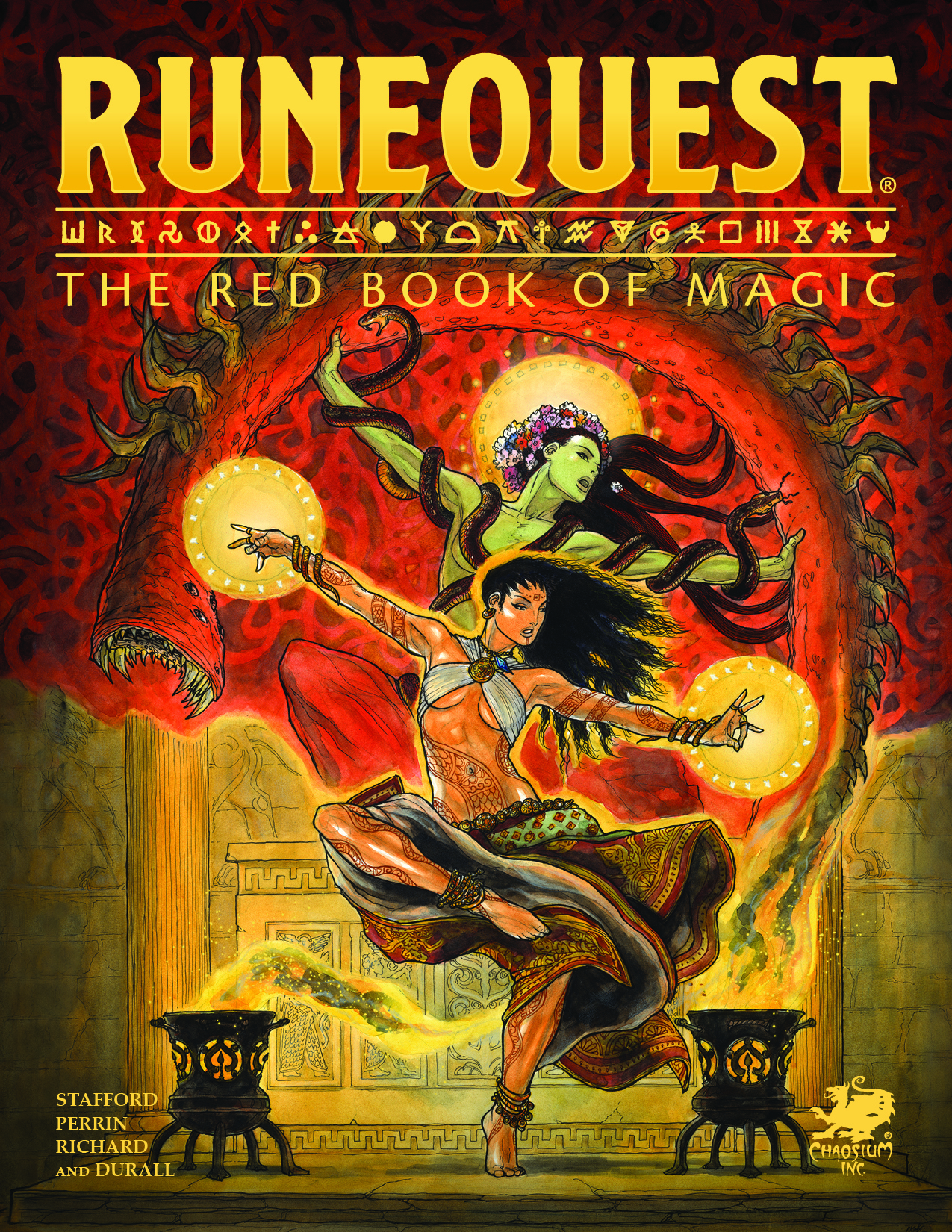 The Red Book of Magic is available in PDF now at Chaosium.com. Purchase today and you’ll receive a coupon to get the full price of the PDF off the physical book when it arrives in our warehouse!

*You can read more about art direction and how it works for RuneQuest in this interview with Kalin about the art in The Pegasus Plateau.