On the print release of the new two volume Malleus Monstrorum Cthulhu Mythos Bestiary for Call of Cthulhu 7th Edition, we spoke to one of the co-authors (and creator of the original edition), Scott David Aniolowski:

Q: What was your first involvement with Call of Cthulhu? Do you recall your first game?

A: The first time I played Call of Cthulhu was sometime in the early 1980s. Our group, like most others, had been playing AD&D for years and we decided we wanted to branch out and try different games. Our first Call of Cthulhu game was 'Death in Dunwich', one of those old TOME scenarios.

Q: You’ve been involved in writing material for Call of Cthulhu a long time. When did it all start?

A: Around 1985 Mike Szymanski and I decided to write up a scenario Mike had run for our group and submit it to Chaosium. It was 'Temple of the Moon'. We split it up and each typed out sections of the scenario on typewriters, then combined all the sections and sent it in. To our delight, Sandy accepted the scenario right away. He asked for a few little re-writes and then published it in Terror from the Stars.

Q: How did the idea for the original Malleus Monstrorum originate?

A: The whole thing had its genesis in Keith Herber’s Keeper’s Companion. I wrote up half dozen or so new Mythos monsters for that book. Later, I added to that and did a short book of monsters for Lynn Willis which we called Ye Booke of Monstres. This was popular so it was followed by Ye Booke of Monstres II the next year. Lynn later combined the two volumes to make The Creature Companion. Then, there was discussion of re-organizing the Call of Cthulhu rulebook and removing all of the monsters, so a bestiary would be needed. I took all of the monsters and gods from the rulebook, added the material from The Creature Companion and a bunch of new material, and the Malleus Monstrorum was born.

Q: What was your role in developing the book? Could you outline the process you went through?

A: Lynn Willis and I discussed doing a large bestiary for Call of Cthulhu that would include everything from the rulebook and The Creature Companion. Chaosium’s files weren’t compatible with any of the software I used, so I had to scan in each page of the rulebook and go through the tedious task of manually assembling and cleaning up all the of entries for the monsters. Once that was done it was just a matter of dropping in my new monsters from The Creature Companion and adding whatever else I came up with. I set out to present a great collection of Mythos monsters for Keepers to use, and wanted to be as encyclopaedic as possible. To that end I decided to include certain monsters that might not have been very good or that were outright hated by some Mythos scholars and fans. Kthanid was one such creature. Brian Lumley’s “good twin” of Cthulhu, gem-encrusted and glowing a brilliant golden hue, another. I took a lot of flak from certain Call of Cthulhu authors for including that one. But my goal was not to judge, but to include as much as I could so as to offer as much variety as possible.

Q: Where there any particular challenges in developing the Malleus Monstrorum?

A: The biggest hurtle was having to actually scan in, page-by-page, the monster chapter of the rulebook. That was a very long and tedious job, and the optical recognition software was still pretty buggy back then, so a lot of words were changed by the software or were turned into nonsensical characters. Also sentences and paragraphs would sometime get scanned out of order for some reason, so I had to go back through and re-assemble the text line-by-line, word-by-word. It was a really tedious affair. For shorter entries I just typed in the text from the rulebook instead of bothering trying to scan it. That was actually much quicker. Also, I had to hunt down and read or re-read an awful lot of stories to find all of the gods and monsters I wanted to use, and find appropriate quotes, find the copyright information, etc. I have an extensive library so most of the material I owned, and I had enough contacts in Call of Cthulhu authors and Mythos scholars that I was able to track things down that I didn’t have. 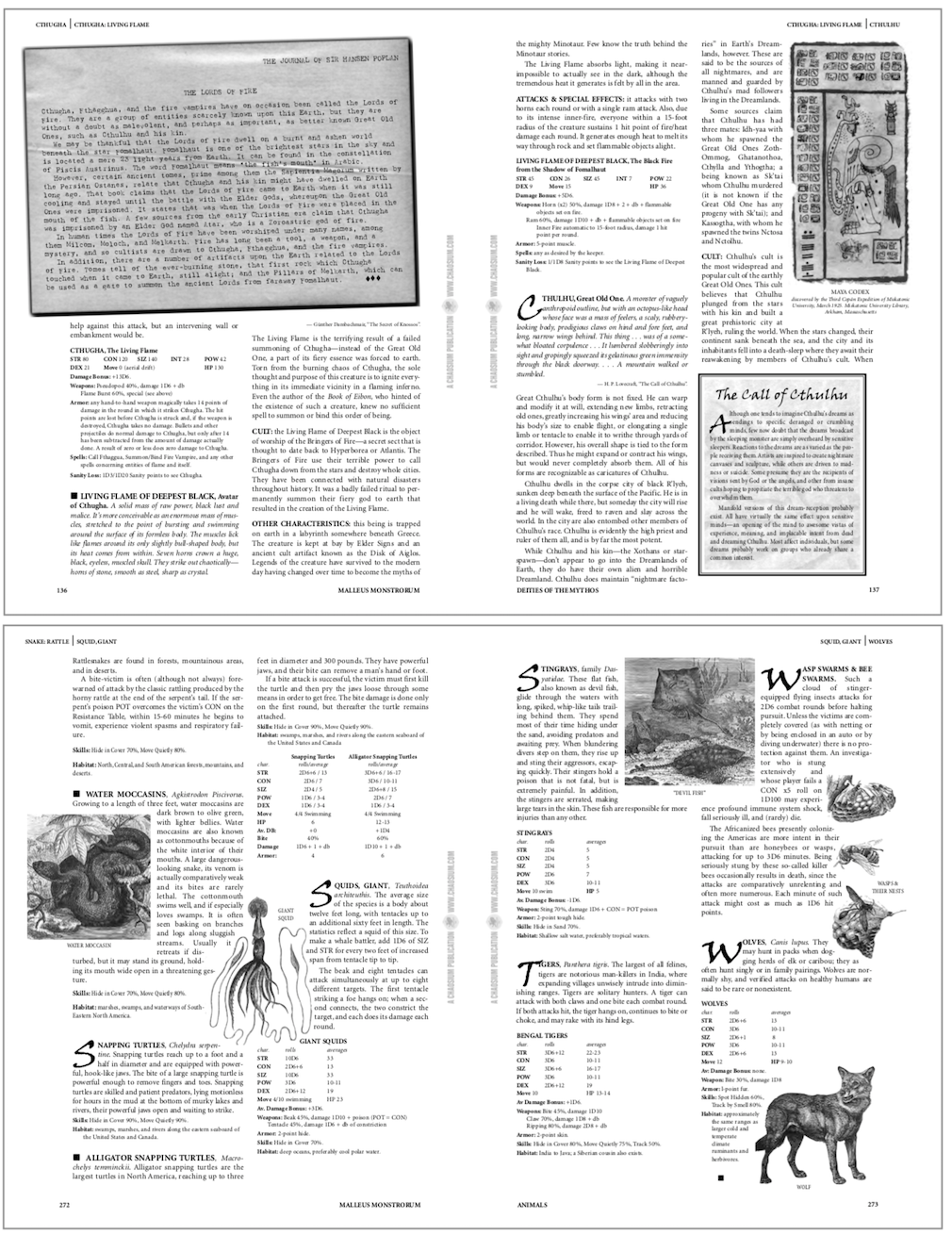 - pages from the original edition -

A: I like the oddballs and the obscure stuff. Iod, Vulthoom, Aphoom Zhah, Vorvadoss, Ubbo-Sathla. Creatures that haven’t been used much or at all in Call of Cthulhu, and appear in maybe just one story. These sorts of monsters are less likely to be recognized by my gamers who might be familiar with Lovecraft’s work. You’ll notice that my published scenarios use a lot of these sorts of obscure deities. Of the Big Guys, I’m partial to Ithaqua: stalking the lonely, desolate dark forests, bringing insatiable hunger and madness. I’m actually not that interested in Cthulhu as he has been so overdone, although I don’t think he has really been done correctly yet. He’s used more like Godzilla as just another giant monster most of the time. As for the lesser guys, the races, I love the Dark Young. I love their appearance: lumbering tree-like horrors with massive hooves, writhing worm-like tentacles, and ichor-dripping mouths moaning and screaming all over their trunks. That’s nightmare-inducing!

Q: It’s the 40th anniversary of Call of Cthulhu this coming Halloween. What does the game and its legacy mean to you?

A: I have been involved in Call of Cthulhu for more than 35 years now. It has been an integral part of my life both as gaming and writing. My first professional writing sale was to Chaosium for Call of Cthulhu. I met many great friends through Call of Cthulhu – some whom I have to this day. As, after Sandy Petersen, one of the longest-published Call of Cthulhu authors still active, I’ve had the pleasure of working with everyone from Sandy Petersen to Lynn Willis to Keith Herber and now Mike Mason. Call of Cthulhu has taken me to a lot of conventions and allowed me to meet a lot of fans and fellow game designers. I’ve seen the game progress from its first edition right up through the new 7th edition. There has been a noticeable shift in players/fans as the game has evolved, and has drawn in a diverse new fan base. I’m excited by this resurgence in interest in TRPGs, and I understand that Call of Cthulhu is now the second-most popular TRPG behind D&D5e. So I hope fans enjoy the new 7th edition of Malleus Monstrorum and I look forward to continuing writing for Call of Cthulhu long into the future. 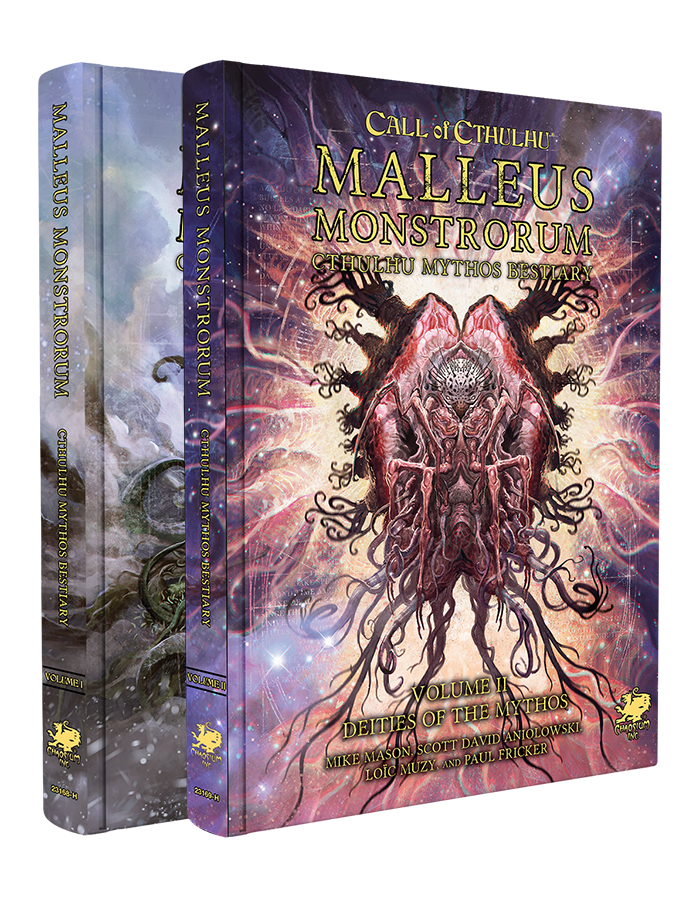 Also available from DriveThruRPG, and in retail distribution (February).