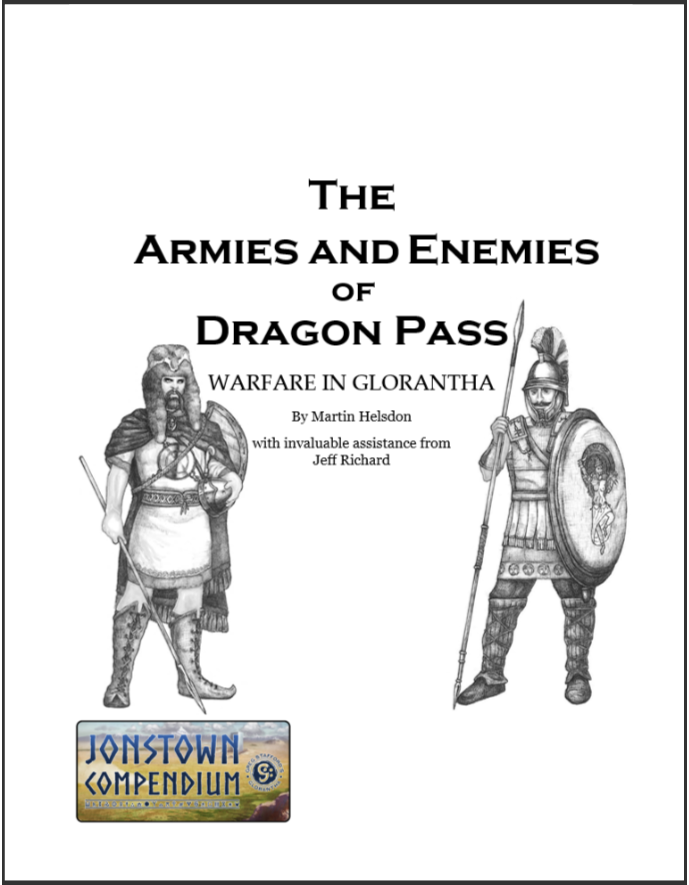 The Armies and Enemies of Dragon Pass is one of the initial releases for the Jonstown Compendium, DriveThruRPG’s new community content resource for Greg Stafford’s world of Glorantha. Within 24 hours, A&E was the #2 best-selling title on DriveThruRPG and shortly after reached Silver Seller status.

The work is the magnum opus of Martin Helsdon. After meeting Martin at Dragonmeet late last month, we spoke to him about the book:

Q: Armies and Enemies of Dragon Pass is an impressive 380 pages long, but can you give us a quick description of what it is all about?

The armed forces of the participants of the Hero Wars in central Genertela, roughly from 1600 to 1630 or so, with details about their weapons, armor, cultures, gods, organization, fortifications and magic.

It is intended as a reference resource, where the reader can either follow the thread of the text in a chapter, or dip in for information, and find inspiration for scenarios, not just in a military campaign, but more generally.

Q: What was your process for writing the book?

The project was inspired by the articles in Wyrms Footnotes #15 and by an early draft of RuneQuest Glorantha.

The Battle skill intrigued me, and posed the question: What is warfare in Glorantha like?

The obvious place to start was the board game White Bear & Red Moon (Dragon Pass), with its pieces naming regiments on both sides, and the Lunar Army List Jeff Richard (Glorantha creative director) had posted online. Various RuneQuest and HeroQuest books gave details of some of these forces, and gradually the entries were populated. Over many years, Greg Stafford had detailed some regiments, but most were not in the public domain. Jeff shared several of these old documents, the most useful being one written for the intended Stratelibri skirmish game, and the oldest written perhaps before the publication of WB&RM; other people responded to requests for information. I also looked at Greg’s Pendragon Book of Battle.

In parallel with this activity, it was apparent that the Army Lists needed supporting information. Lots of it.

Most regiments have patron deities, and whilst many are well known, others are obscure. Then there were the questions of the nature of their arms and armor, how they fought, and a realization that to create a standalone book (and the material was growing well beyond the confines of an article or series of articles by this stage) it would be necessary to create something not unlike a homage to the books of the late Peter Connolly or the Wargame Research Group.

Given the arms and armor listed in RuneQuest, it was apparent that warfare in Glorantha isn’t unlike warfare in our Bronze and Iron Ages, but with magic. If armies fight in phalanxes and shield-walls, then the nature of battle isn’t going to be utterly unfamiliar, unless the powerful magical regiments or Heroes are involved.

Of course, this means you should describe how phalanxes and shield-walls fight, which isn’t as clear cut as it might seem. We have very few if any texts from the ancient world about exactly how soldiers fought, because everyone knew these things; pictorial sources such as Greek pottery or Assyrian palace wall panels are only of limited usefulness. We have partial texts about how to train Mitanni chariot horses, or the regulations to be obeyed by Hittite guardsmen, but no military training manuals. We know the procedure to be followed by a Hittite soldier if he wanted to pee on parade at the palace, but not how he fought!

Most battle descriptions, if any, were written a century or more after the event, and again don’t tell us things the original readership would have taken for granted. As a result, it was necessary to try to answer what phalanxes and shield-walls (which, as a style of fighting predate the Dark Ages) were like, when the modern books on these topics are often projectiles in long running and often brutal academic disputes because: no one really knows… For that matter, the television series The Last Kingdom shows two different types of shield-wall and they are both valid.

I have always been fascinated by how things are made, and delved into how weapons, armor, shields, chariots and other things were manufactured. This mundane detail can be easily ignored by a reader, but it can be used as campaign color and even as scenario seeds: for example, perhaps the clan redsmith needs clay for the mold of a special bronze sword – maybe the players have to either buy or steal the clay from the neighboring clan or tribe, or go to trade in a local city, or more heroically, the clay has to be special, and is only found in a cave in Snakepipe Hollow.

This year Jeff shared some new material (based on old annotated material by Greg recently unearthed) which listed regiments that were either unknown to me, or only named in old army lists, and Lunar Army Corps distinct from those I knew about… A few weeks of rewriting later, the book had roughly reached its current state, though a few appendices were excised to keep it to a near manageable size.

Q: The author’s note at the beginning of the book states “While every effort has been to make this book as canonical as possible, it does not define canon”. Can you tell us more about this statement, and what the implications are for readers wanting to use the work for their own gaming in Glorantha?

Whilst material in the book is derived from sources that were canonical when they were written, these provide distinct ‘data points’ and it was necessary to fill in the gaps with ideas drawn from ancient terrestrial warfare, or simply made up.

This means that whilst Jeff has been generous in providing information, there’s no guarantee that the book hasn’t diverged from unpublished or future canon. It is future-proofed to a degree because I have seen draft copies of some forthcoming publications, but there are numerous assumptions and speculations. It does not in any way define or constrain canon.

For readers utilizing the book as a resource: it is a source of ideas and ‘facts’ to be used, modified, or ignored in their gaming as they desire.

Q: The book is lavishly illustrated, with much of the art hand drawn by yourself over a long period. Can you tell us about this creative process?

My illustrations divide into two sorts: drawings of weapons, armor, shields and buildings, either composites or drawn digitally, and sketches of combatants.

When the book was initially ‘complete’ (it wasn’t) about a year and a half ago, Moon Design identified a handful of people who could review it. Among the comments there was a demand for more illustrations, specifically of annotated depictions of soldiers. After a brief assessment of what buying in illustrations would cost, I decided to try to draw a few. Many years ago, I used to provide illustrations to a few science fiction fanzines and Play By Mail roleplaying games, but attempting anything as intricate was impractical. Inspiration came from the Stratelibri skirmish game document, and I unashamedly closely copied one of the illustrations. As that one more-or-less worked, I did three more that weren’t copies. These satisfied the reviewer, but then wouldn’t it be nice to illustrate some of the regional combatants?

More than a hundred sketches later…

Over time a style and method developed, where I would mostly select a unit, rough out an outline and then try to create a more finished piece, working with ink pens on smooth paper with the outline beneath, shading using crosshatching, over a light box. The result would be scanned, and flesh tones added digitally; the image would be reduced in size and then annotated. Infantry took three days to draw, cavalry twice that.

Q: Of all your own art in the book, what’s your favourite piece?

Perhaps the Traditional Solar Horse Archer, or maybe the hoplite of the Nightlight Spears. 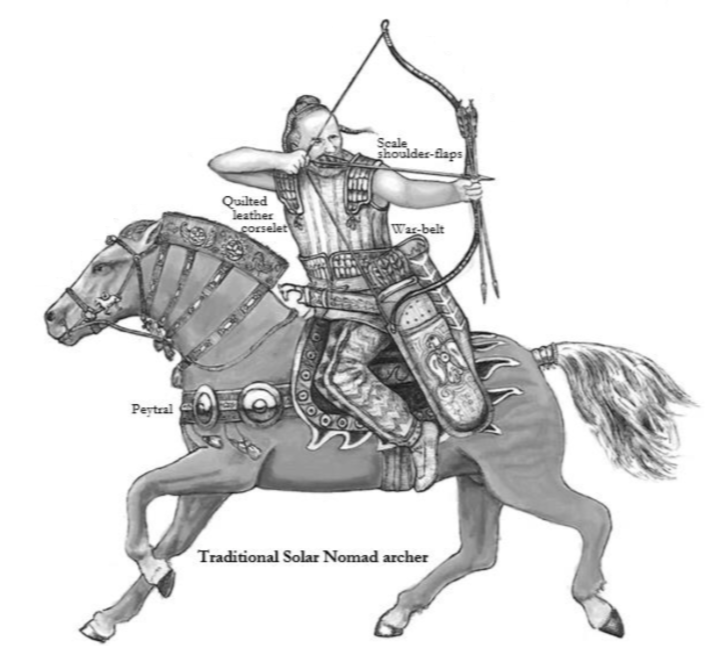 Q: Were you surprised by the enthusiastic response to book?

Q: This work covers Dragon Pass and surrounding areas including the Lunar Empire and Prax, yet the world of Glorantha is still a very much bigger place. Are you contemplating writing about the armies of other regions?

There have been demands this week for similar coverage of the West and East of Genertela. The former is more practical because my knowledge of the East is little more than that presented in the Guide, and I have only read a handful of books about warfare in the terrestrial ancient East, and it is an enormous field.

My next project is to create a small pamphlet of material excised from the book.

The 380 page The Armies and Enemies of Dragon Pass is available in PDF from the Jonstown Compendium community content resource at DriveThruRPG. A Print-on-Demand version is also planned. 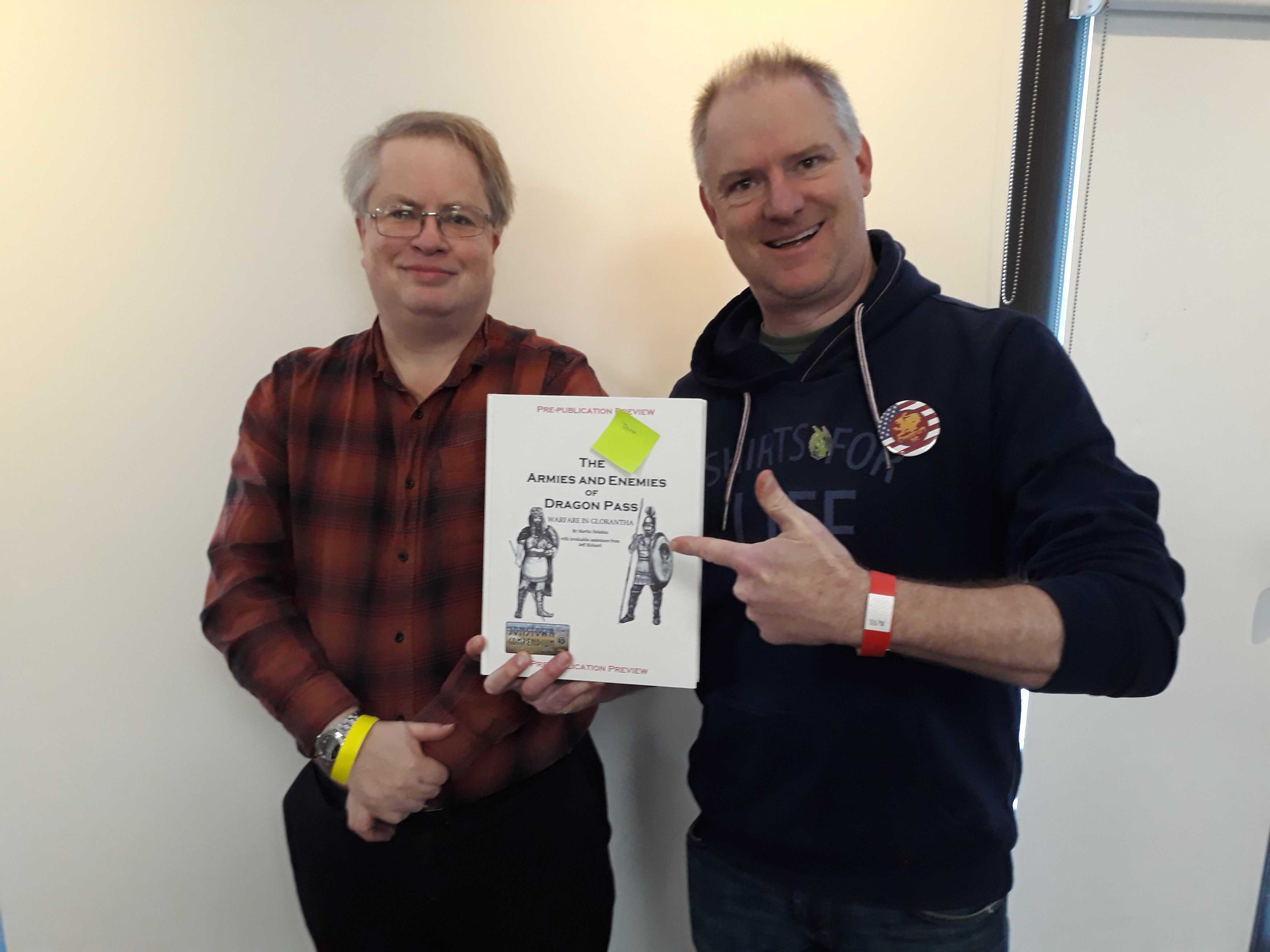 Martin Helsdon (L) presenting Chaosium's Jeff Richard with a pre-release copy of The Armies and Enemies of Dragon Pass at Dragonmeet, London UK on November 30.