Diary #1: What to expect in the RQ Starter Set
Diary #2: Cover Art reveal, and what's inside the box
Diary #3: The new adventurers

Continuing our introduction of the new adventurers in the RQ Starter Set, for this installment I thought it would be interesting to take a closer look at two who don’t fit into easy categorization: Makarios the Chalana Arroy healer and Narres Runepainter of the Necropolis. 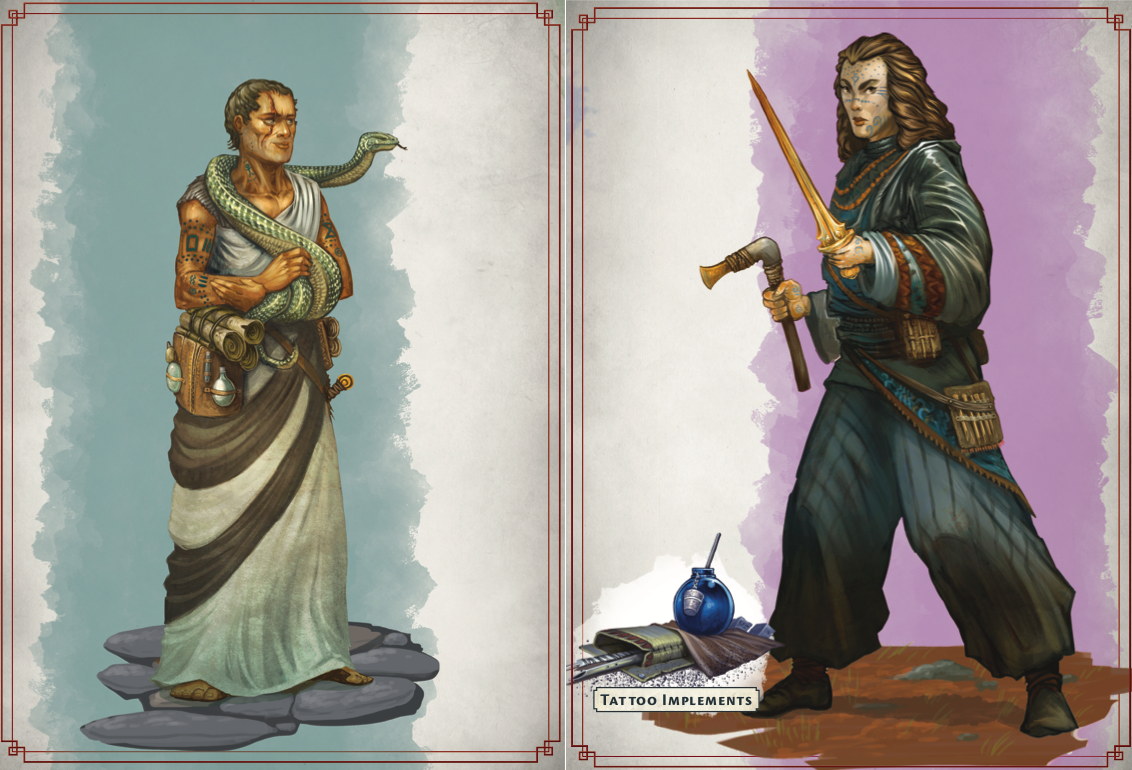 While traditionally, a majority of Chalana Arroy healers are women, there are no rules barring men from the cult, and when rolling up the adventurer, I decided from early on to make a male Chalana Arroy healer. In this case, Makarios has followed in his mother’s and grandmother’s steps into the path of healing. The dice rolls gave him a distinguished grandmother and mother, but then also had him run into a bit of bad luck in which he received an awakened animal companion. Given the mythological connections between healers and serpents, I decided that Makarios had a white serpent that helped him when he was injured and dying.

For those who enjoy healing-oriented characters, Makarios is the way to go, with the potent Resurrect spell as part of his repertoire, and mundane First Aid and Plant Lore for when he doesn’t want to spend any Rune points. He’s not a slouch with a sling, either. Though all Chalana Arroy healers take an oath not to harm living beings, there is nothing about fighting undead, and Makarios is (reluctantly) willing to take up arms if he and his companions are threatened by the forces of unlife.

Similarly, the Heortling people recognize four sexes and six genders, but the initial seven pre-generated adventurers didn’t reflect that, so I felt it was important to have a character who wasn’t male or female. Narres came together as a combination of a few factors I’d been considering for a while: a nonbinary adventurer; a more philosophical take on the Eurmali cultist than a simple jester/trickster; and someone born and raised in Esrolia’s incredible Necropolis, a site I’ve wanted to do something with.

Another thing that had been percolating was the practice of tattooing in Glorantha, and I quite liked the notion of an adventurer whose ‘day job’ was tattooing all of the evocative tattoos we see on all of the people of Glorantha. Most tattooing is likely done within the clan or temple, as one learns the Runes, but it also seems more-than-likely that there’s a bit of professional tattooing. (I will admit that Narres is also inspired a bit by Zatoichi, the blind swordsman/masseuse from Japanese fiction and screen.) I had the idea that within the Necropolis there’s a whole industry of those who prepare the dead for burial and tend to the not-quite dead, and that’s where Narres finds themself.

As tattooing is an artform unlike any of the others, it also seemed like this would be a good choice for the Eurmali character, who turned into a bit more philosophical in my head than many. Jeff Richard suggested that they extend a fluid gender identity to actual magical fluidity, and we added a new spell from Cults of Glorantha to the list of those provided.

So if you want a character who’s a bit philosophical, a bit enigmatic, has a bit of skill with bluffing and stealth, but with a surprisingly pragmatic view of the world and the transition between life and death, Narres is the best choice for you. Of all the new ones, Narres is the one I’d like to read more about, and have had a fun time dropping them into a few of the playtest campaigns as a non-player character.

One thing players of RuneQuest may have noticed is that we’ve focused on an iconic group of adventurers in much of the artwork for the game. This also extends to many of the demo games, and behind the scenes with adventure writing. When a writer asks about how to get player characters ‘hooked’ into a particular adventurer, I always say “Look at the pregenerated adventurers. Why would they get involved in this adventure? Is there something for each of them to do?” Usually, the answers to those questions provide a wide range of options for any player character group.

We have also used those characters on the covers of most of the existing books, from the RuneQuest Quickstart and RQG core rules, the Gamemaster Screen Pack, the two adventure collections (The Pegasus Plateau and The Smoking Ruin), and Yanioth being featured on the cover for The Red Book of Magic. And when we decided what to put on the cover of the Starter Set box, it became clear that we wanted our iconic characters there. So rather than just getting seven new pre-generated ready-to-play adventurers, we decided to put the original seven in there as well, for a total of 14 to choose from! 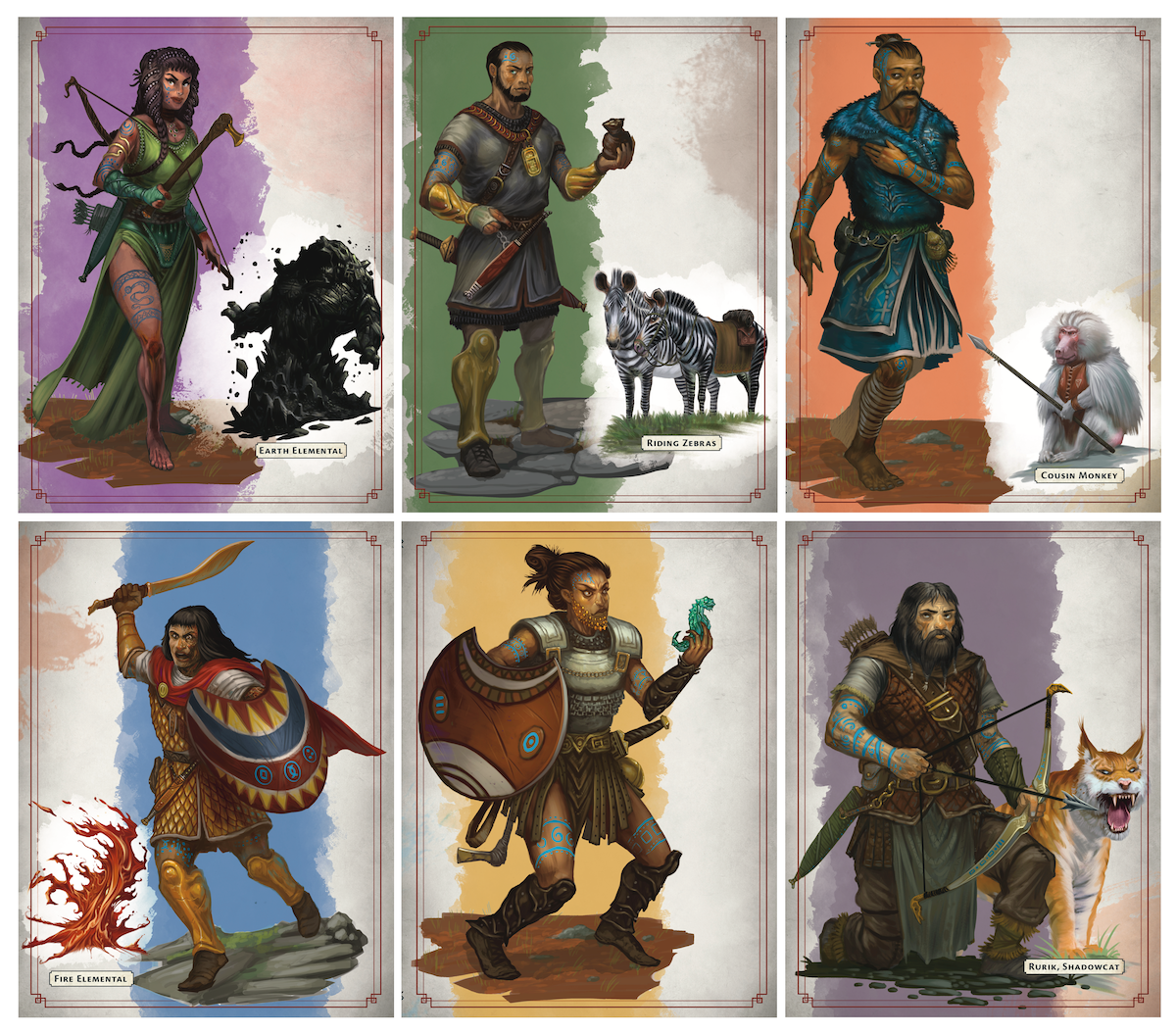 Originally, we planned on just following the layout from the RQG core rulebook and the RQ Quickstart for the character sheets, but early on we decided to push the graphical envelope and do something different and more deluxe and user-friendly. Looking at the information we wanted to convey and the visual impact we wanted to make, it made sense to go for something in the gatefold format, with a big full-page picture of the adventurer on the back. It took a lot of experimenting but we are happy with the end result. So much so, that we decided to provide some blank sheets in this new folio format for you to use with your own adventurers!

Here's Vasana, the star of the original pre-gens, in her adventurer portfolio format: 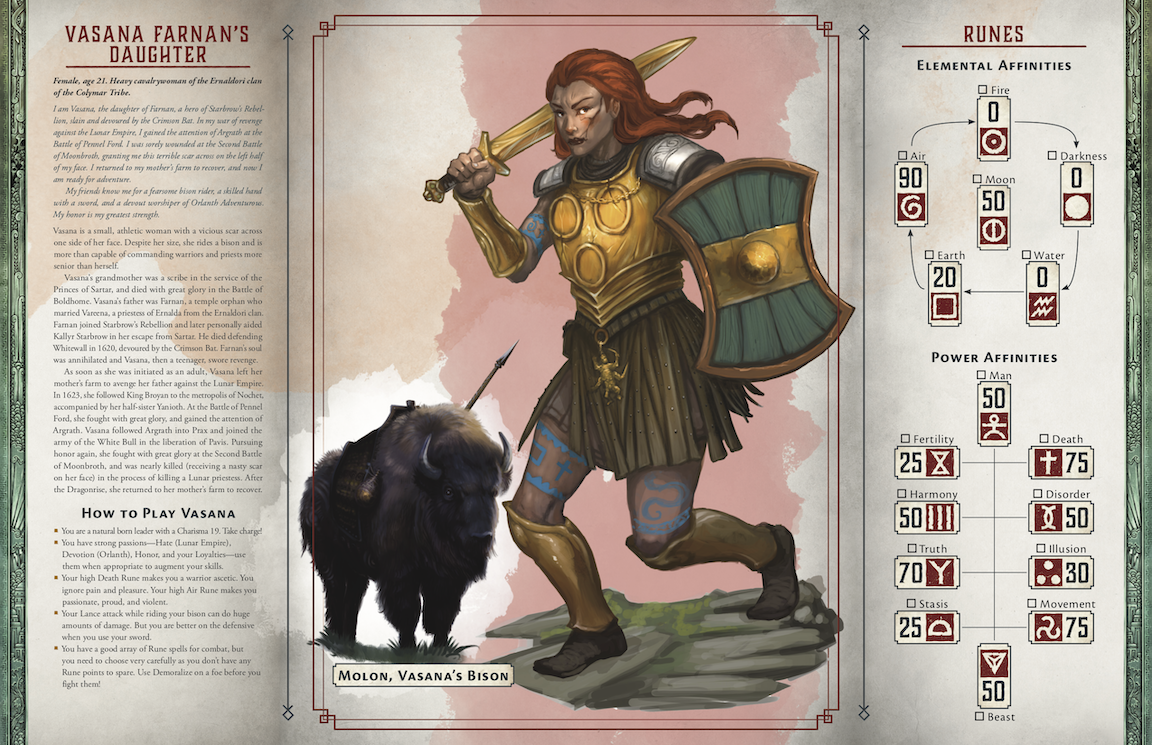 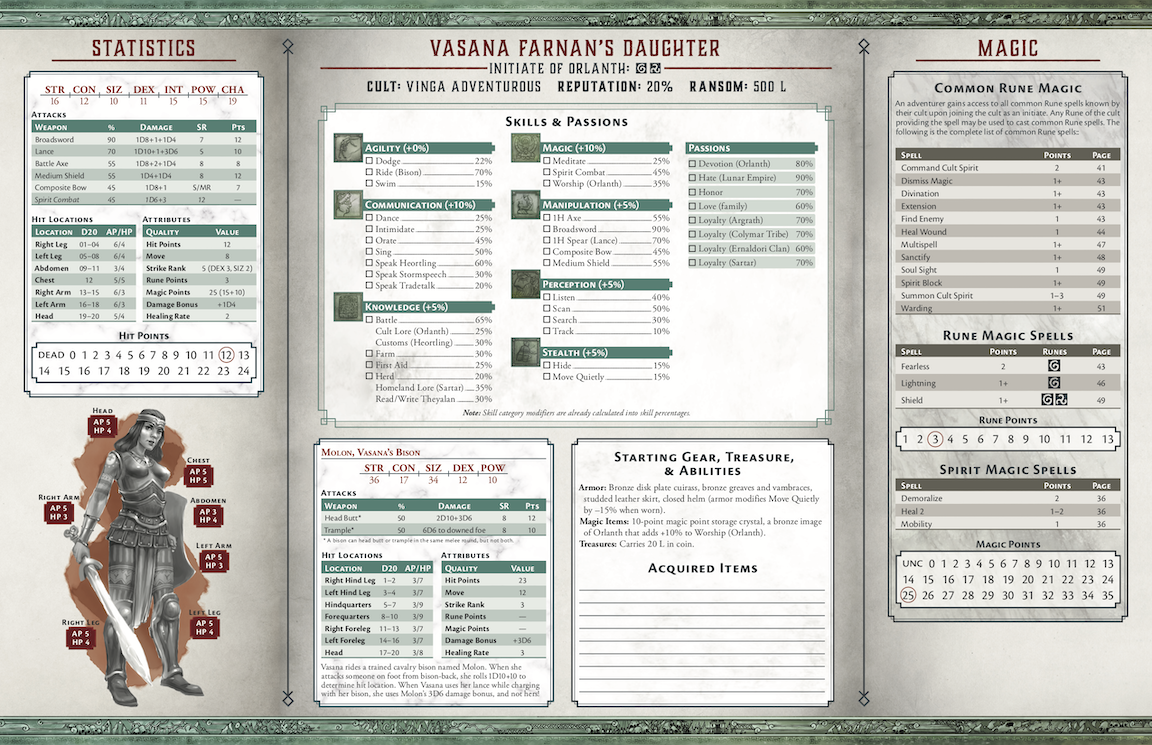 Glorantha has a lot of diverse and interesting non-humans, from our signature trolls to ducks to Morokanth, and dwarfs and elves unlike any other game world. One last thing we’ve decided to do for players who really, really want to play a non-human, is a simultaneous online release of a group of pregenerated non-human adventurers, laid out in the same format as the other pre-generated adventurers. Details on this are still being finalized, but it should add yet more variety and playablity to the Starter Set materials.