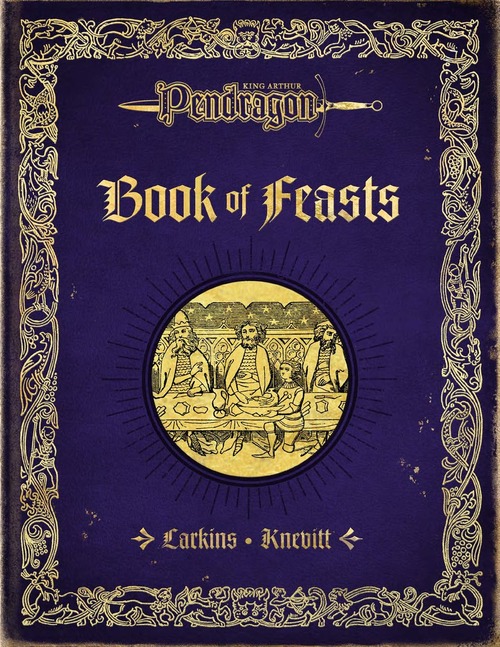 The Book of Feasts for the King Arthur Pendragon (KAP) roleplaying game brings the important medieval and literary tradition of feasting to your table. It presents the feast as a “mini-game”, putting feasts on a par with tournaments and battles as key non-questing events of the campaign.

In my own games I used an early version of the feast system which descended from the earliest feast tables first conceived of and written by Greg Stafford in Knights Adventurous, later developed by divers hands on the KAP message boards into an actual deck of events.

I found my players loved the change of pace and unpredictability afforded by the feast deck, and in 2015 I was honoured when Stewart Wieck asked me to take the system I had been using and turn it into a full-fledged product. The result was the Book of Feasts and the Feast Deck.

With my co-author James Knevitt, we tweaked the system and wrote up 120 unique events for the 155-card deck. The mechanics in the Book of Feasts work hand-in-glove with the Feast Deck to present a largely improvisational social event, one in which the players subtly compete against each other to earn the most “Geniality” over the course of the evening. (I should also mention that the Book of Feasts presents a wealth of information on medieval feasting practices to help Gamemasters bring their events to life, and even some medieval recipes to try at home!)

One central feature of my feast system from its earliest development has been making the Appearance (APP) attribute important. The system I initially play-tested featured APP rolls every round of a feast, but I found that this punished player-knights with low APP scores too severely; their players weren’t having any fun.

Now the APP roll comes in once at the top of the feast, but it’s an important roll, for it determines where you are seated, which in turn affects your overall Geniality score.

Is it realistic to seat people by beauty instead of rank and title? Absolutely not! But then King Arthur Pendragon is a game equally rooted in myth and history; this mechanic leans heavily in favour of the former. In the world of the Pendragon, the most beautiful people are judged to be the most wholesome, the most admirable. Thus, they are elevated above those are merely plain, while the ugly or repulsive are to be shunned and pushed to the margins.

For those who nonetheless wish to introduce a bit of The Manual of Rank and Nobility to their feasts, I recommend replacing the jewelry and fashion modifier to the APP roll with a modifier equal to Glory/1,000. Thus the more Glorious the knight, the more likely they’ll be seated near, or even above, the salt.

Being seated above the salt carries the potential for large Glory awards, certainly over 100 points. The knight who is judged most genial at the end of the feast is likely to earn 100 Glory as well. These are large awards, no doubt about it, and they reflect an unspoken assumption in the rules: the feast system is not to be used for every meal!

Run the feast system when you want to present a notable or memorable feast. There should be a hard limit of no more than one such feast a year, and I would recommend reserving the Feast Deck and only bringing it out on average of once every three to five years. Use the Feast Deck when something interesting promises to happen, not just for any old feast—even the annual Pentecost feast may be hand-waved most years. Not only does this help ameliorate potential Glory inflation, but it also keeps the system fresh and exciting for your players.

It will be a challenge, though. I have found that once you introduce a group to the magic of feasting, their hunger for more only increases. If you wish to use the feast system more often (or your players insist on it), reduce the Glory awards. Eliminate or reduce the Glory award for sitting above the salt, and perhaps drop the “most genial” multiplier to ×5 or less. 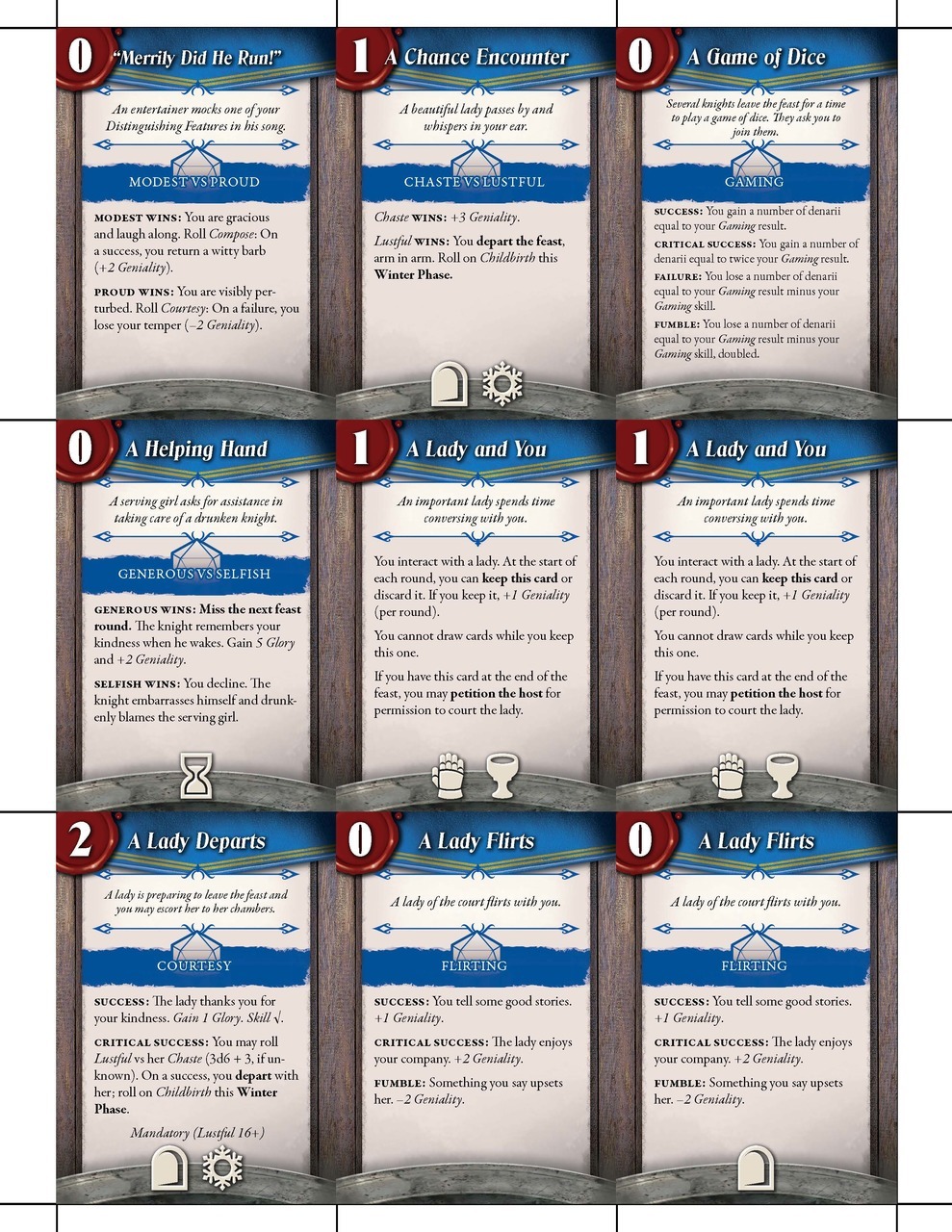 A final post-script: King Arthur Pendragon is a game that assumes a baseline of knights as player characters, with the vast majority of those characters being men. Although my group (comprised of four women and one man) has never had an issue with this assumption, and I’ve talked to many women who play male characters in KAP regularly, James and I endeavoured to make as many cards as possible applicable to either lady knights or ladies of the court.

Naturally we had to write to what is the central experience of the game, but that being said, of the 120 card types in the deck, only 30 types are written specifically for knights and/or cannot be “gender flipped” to accommodate a lady character’s POV. It is quite possible to use the deck to run feasts for ladies of the court or other non-knightly folk, perhaps as a one-off event in your campaign.

However you decide to run it, may the Feast Deck system bring you many evenings of good food and good cheer!

The Book of Feasts and Feasts Deck is available in PDF from Chaosium, and PDF and Print-on-Demand from DriveThruRPG. You can also grab the form-fillable PDF version of the Feast Record for free!