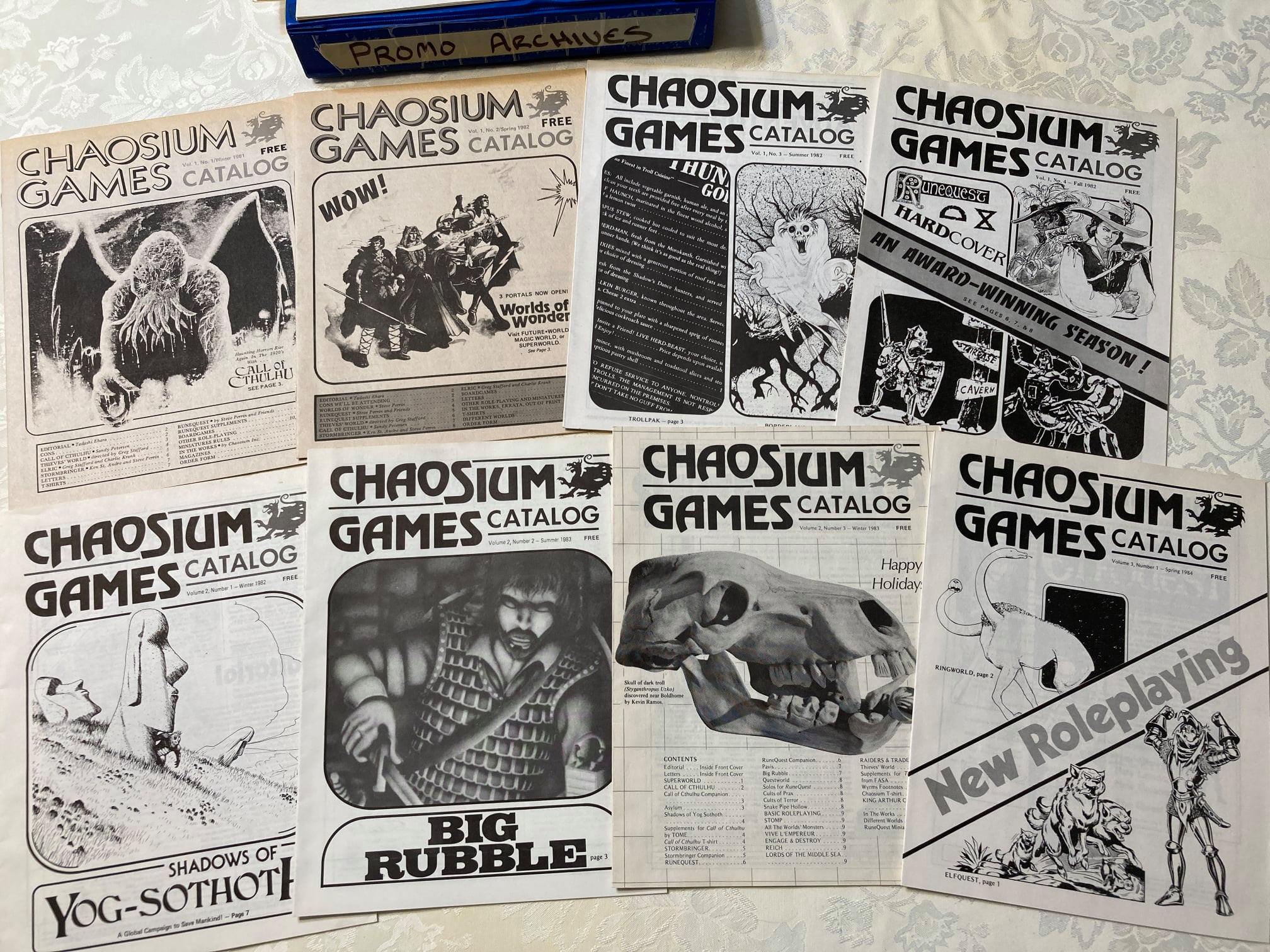 Last Saturday, during an informal discussion about Chaosium history on Discord, I briefly mentioned the old Chaosium catalogs and what wonderful information they contain.

The catalogs provide snapshots of the company's products for many moments in time. From 1975 until right around 2000 Chaosium didn't have an online store. In fact, for the first 10 years of our existence you either bought our games in person at a game store or convention, or you could buy them directly from us via mail order. I suppose that some of us old enough to know what SASE stands for might have actually filled out an order form, included a check or money order, put it all in an envelope, mailed it off, and then anxiously awaited 3-6 weeks for our order to arrive in our mailbox. Ever the innovator, Chaosium started taking phone orders and accepting credit cards in the mid 80s. We even advertised this with the catchy (at the time) "Do it by Phone!" slogan.

What I like most about the early catalogs (bottom pic) are the occasional references to "upcoming" products that never actually got published. Early ones included: 1978 - Proud Prince of Ruins, miniatures rules for Elric; 1979 - Starbane, a space combat game (retitled to Cyclopes Cluster before it was never mentioned again), and 1981 - Castle Storm, a medieval board wargame.

Then we get to what I consider the golden age of Chaosium catalogs (top pic) starting in the winter of 1981 and ending in the spring of 1984. Cthulhu himself featured prominently on the first cover of that series. His arrival was heralded in the Summer/Fall 1981 catalog and the Call of Cthulhu RPG debuted on Halloween in 1981.

Included in Chaosium's boxed games, these catalogs provide some great reading. Numerous "In the Works" products had a section devoted to them. Privateers & Gentlemen, set in the age of sail was to be a boxed RPG. While Worlds of Wonder was published, the announced Vikings book quietly disappeared from its box. I love the Trollpak announcement with its exact and vague estimate of "available approximately May 15, 1982". Also, in 1982 we learned of Reckless Adventure, where players explore pulp adventures of the 1930s. I'd like to think that eventually would become Pulp Cthulhu, but a 35 year delay is a bit of a stretch.

The seven-year streak of regularly announcing a product that wouldn't see print finally ended in the Fall 1982 catalog where all 4 products mentioned actually got published. The old ways returned in the last of these catalogs though, when we were tempted with Return of the Elochians, which was to contain three Superworld scenarios.

Many more catalogs were to follow, but those will have to wait for another post. We don't produce catalogs very often now that so much of our product info is available online. In fact, we only processed one mail order in all of 2020, and that one was for a long-time loyal customer who has neither a cell phone nor internet access. We won't say "no" to a mail order from a customer of almost 40 years, even if most things change...

PS: If you must know, he ordered three Call of Cthulhu books. 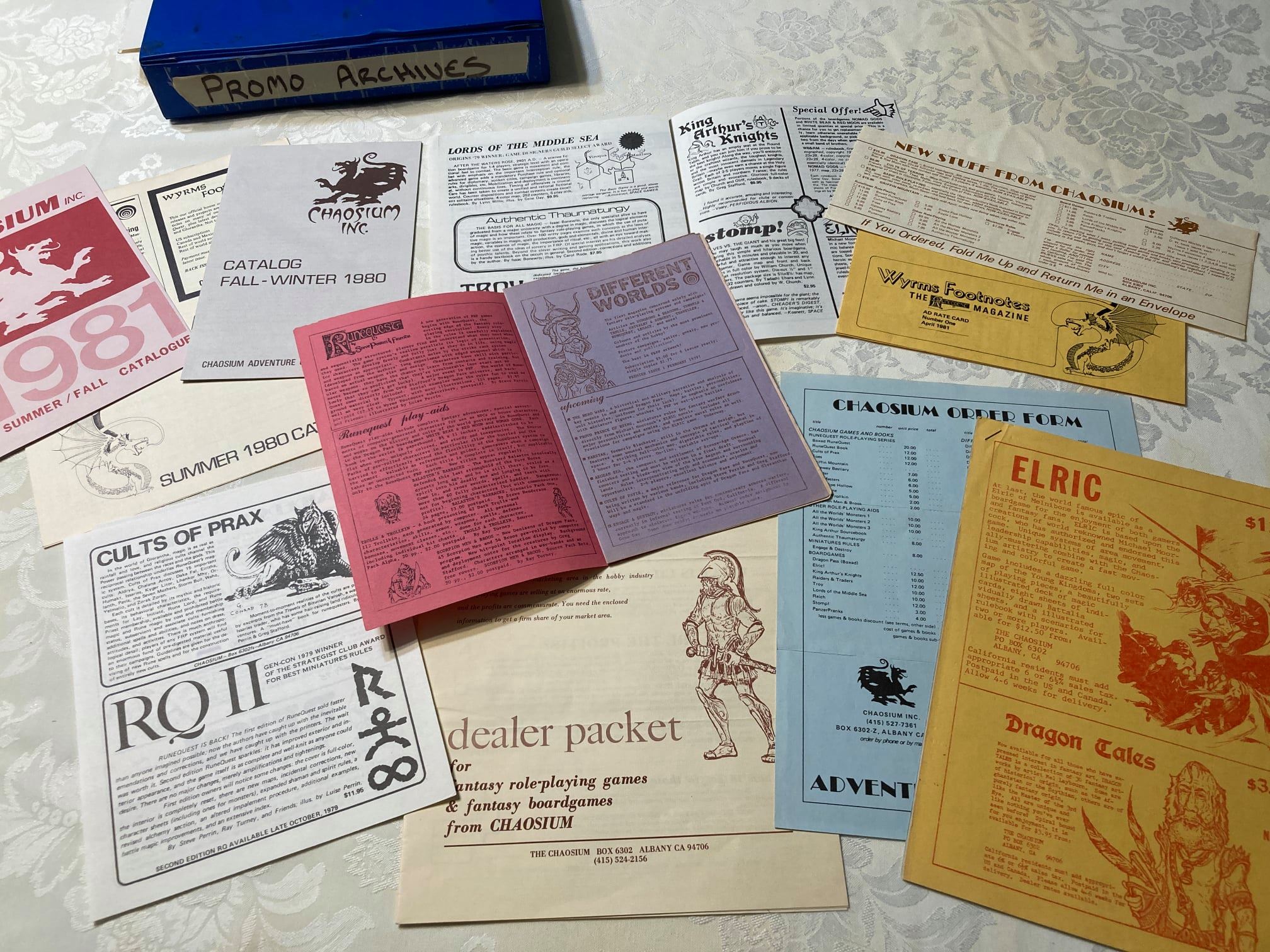