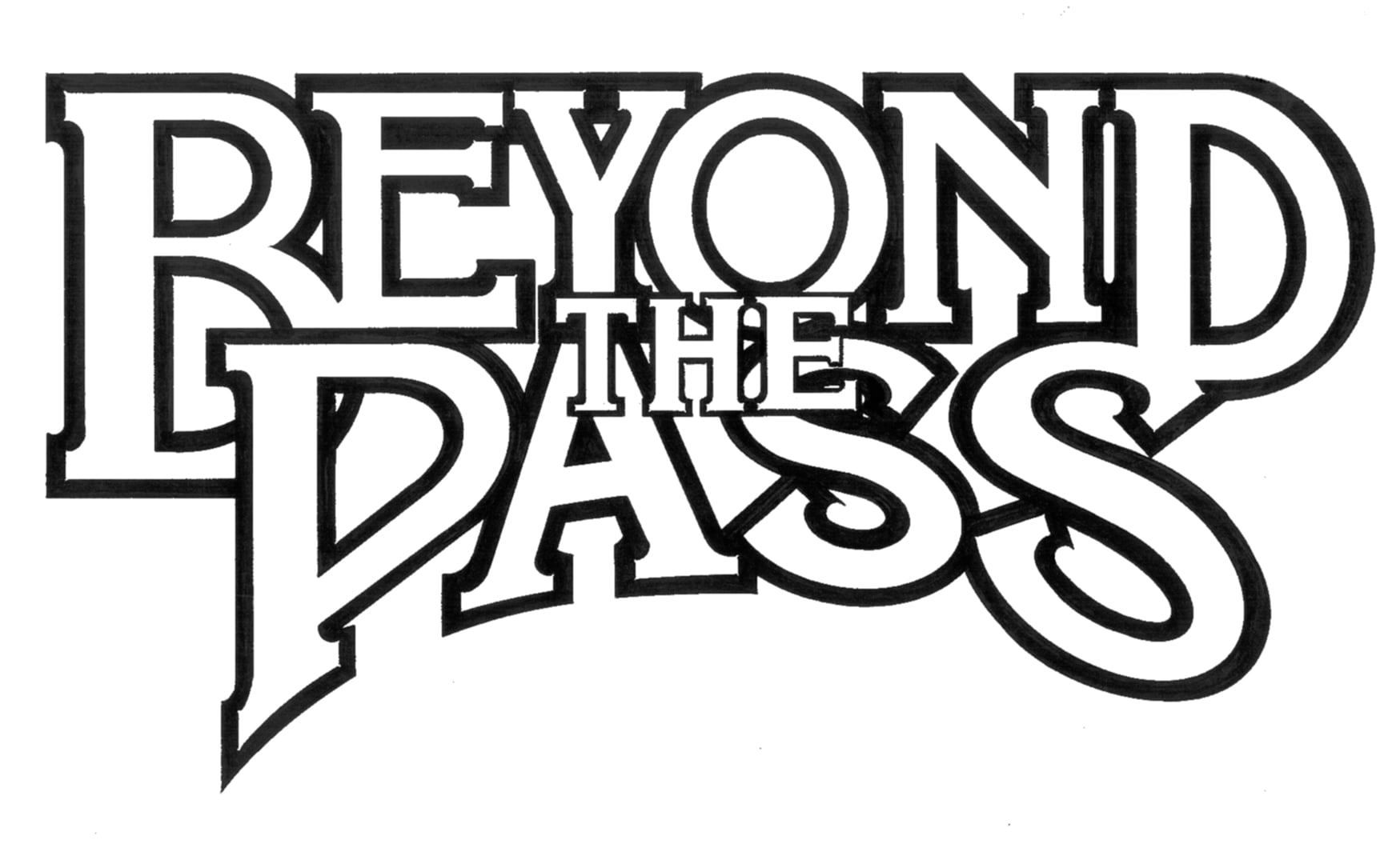 I played through Griffin Mountain in the summer of 1981 shortly after it was published. It's my favorite RuneQuest campaign. Here's the story about how Griffin Mountain came to be. As luck would have it, the actual original layout still exists, and is part of our company archives.

Rudy Kraft (author of RQ2's Plunder) worked on the initial draft of a manuscript called Beyond the Pass until he grew bored with it. To round the book out he asked Jennell Jaquays, whom he had worked with on Duck Tower, to add more material. Jennell doubled the size of the manuscript and started on some draft artwork, and a logo, shown above. I thank Jennell for providing me with a scan of the original.

Being in different parts of the country, Rudy and Jennell reworked the manuscript via phone calls and type-written letters. They then submitted the manuscript to Greg Stafford at Chaosium and the contract for Griffin Mountain was signed on the 17th of September, 1980.

While originally written as a "Gateway" (non-Gloranthan) supplement, Greg decided to set it in Glorantha, which caused a flurry of edits and rewrites.

Once the manuscript was finished and edited, final art and layout were added to the mix. Being the early 80s, layout meant actually cutting and pasting things together on layout sheets.  I'll talk a bit more about the layout on each of the photos in this post.

Upper left is the printed book, which we had to cut apart to scan in the text properly for the new remastered version we released in 2016. Below is the original cut-and-paste layout of those pages from early 1981. The yellowing "blue ink" pages are the printer proofs used for final print approval. The layout for the book was not done on heavier cardstock boards like subsequent projects. The pages were all laid out on simple graph paper. 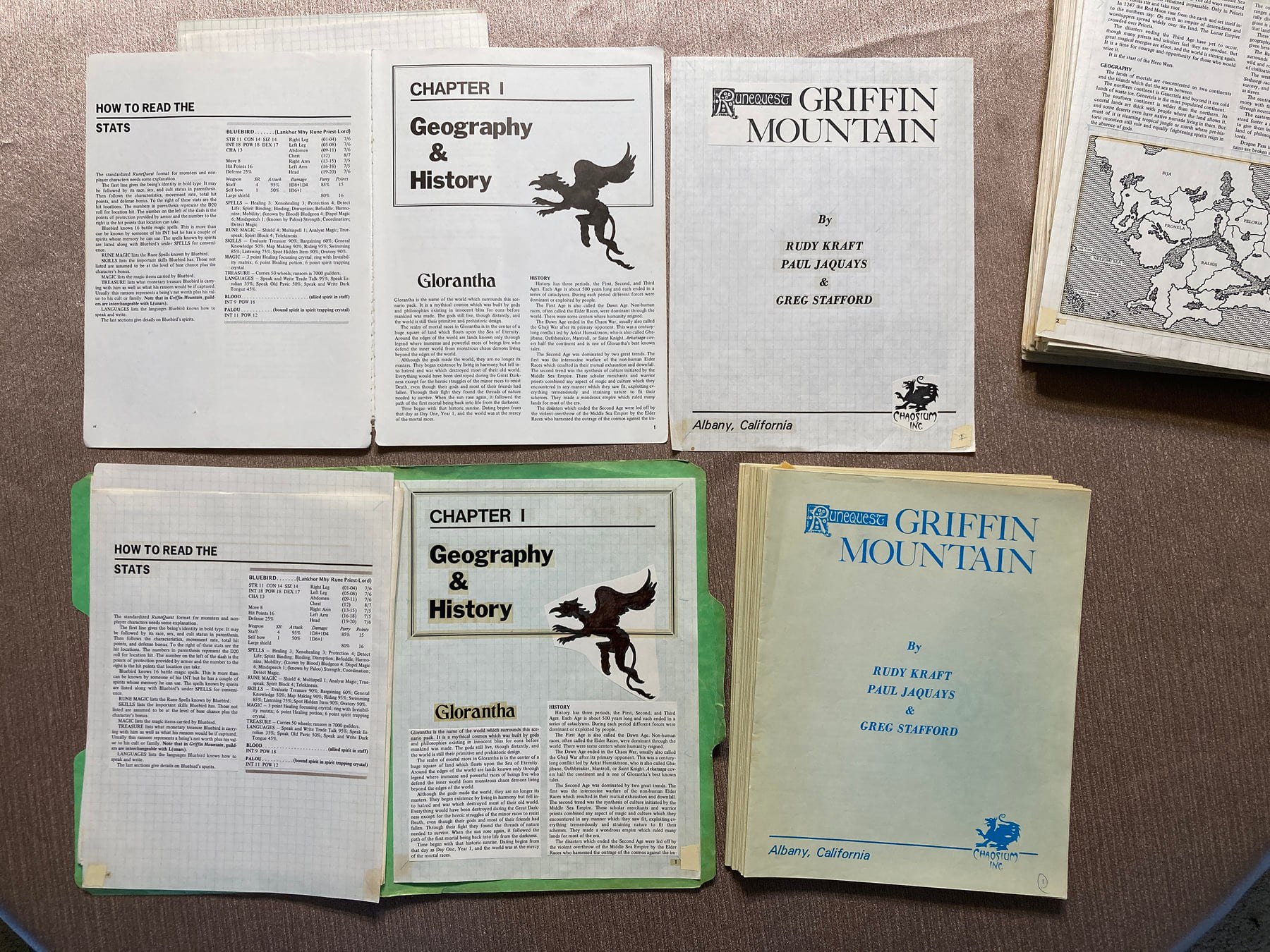 The cover spread for the book was a multi-step process that involved combining the layout with camera ready copy of the art, which would ultimately be combined on film. Some of the logos have yellowed with age, mainly from the glue used to paste them onto the layout page. 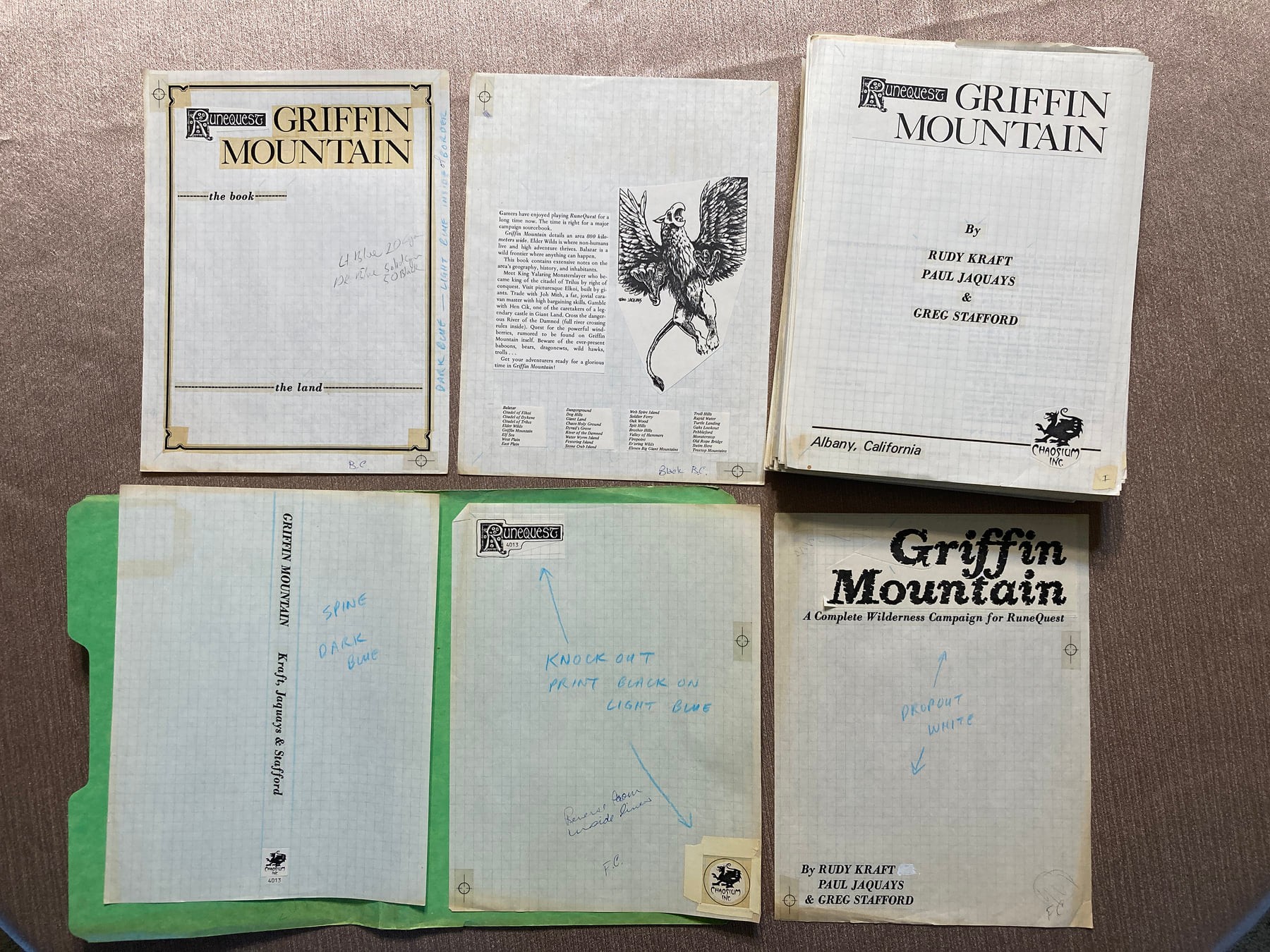 Some pages involved using letraset dry-transfer lettering for the headings and borders. Each letter of the heading was painstakingly added individually. As you can see at the bottom, if a table needed editing they often just pasted the corrections on top of the previous info. 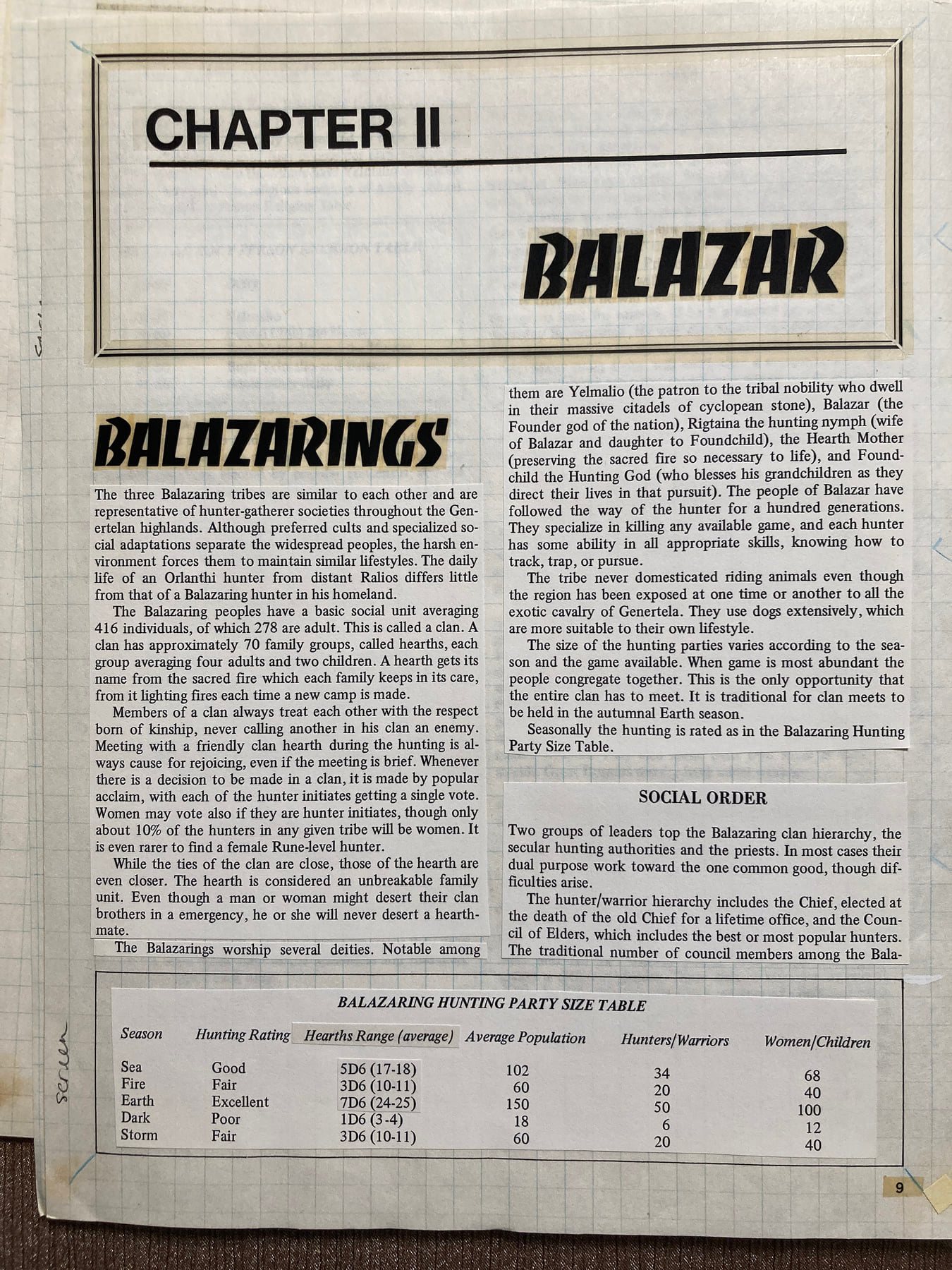 The maps for inside the books had a different level of detail (and no hexes) than the poster maps. Yes, we have the cut and paste versions of the big poster maps too. The Map of Balazar (now available as a poster at our Redbubble store) is my all time favorite RQ map, followed closely by the William Church Sartar and Prax maps in the RQ2 rulebook (also available at Redbubble). 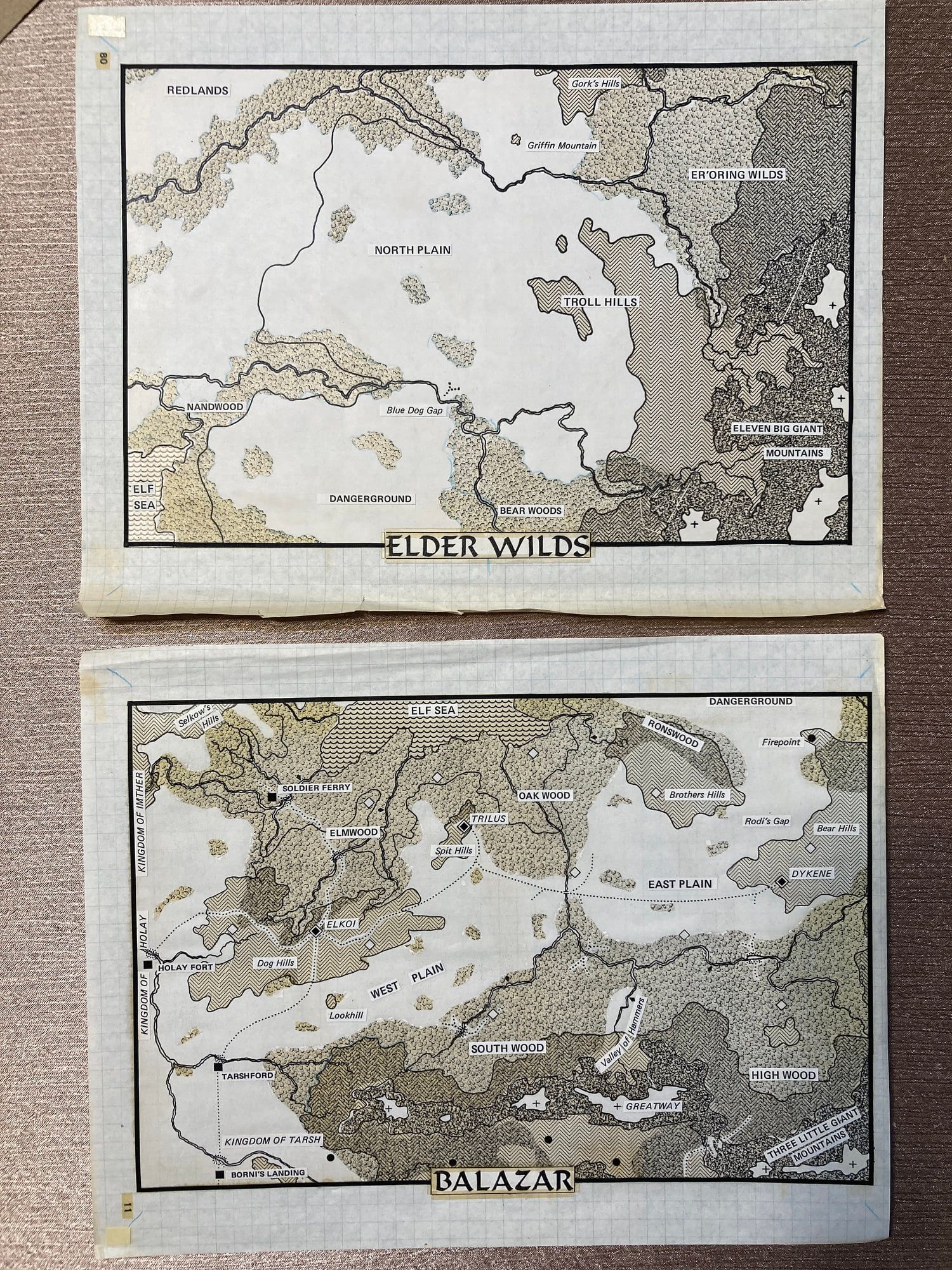 Finally, the original cover art was done as a painting by the very talented Jennell Jaquays. It's obscured by the frame, but written below the image is the title of painting, "Harmony at Twilight". Apologies for the glare caused by light reflecting off of the glass: it is one of the most cherished items in my personal collection, and hangs on the wall in my office. 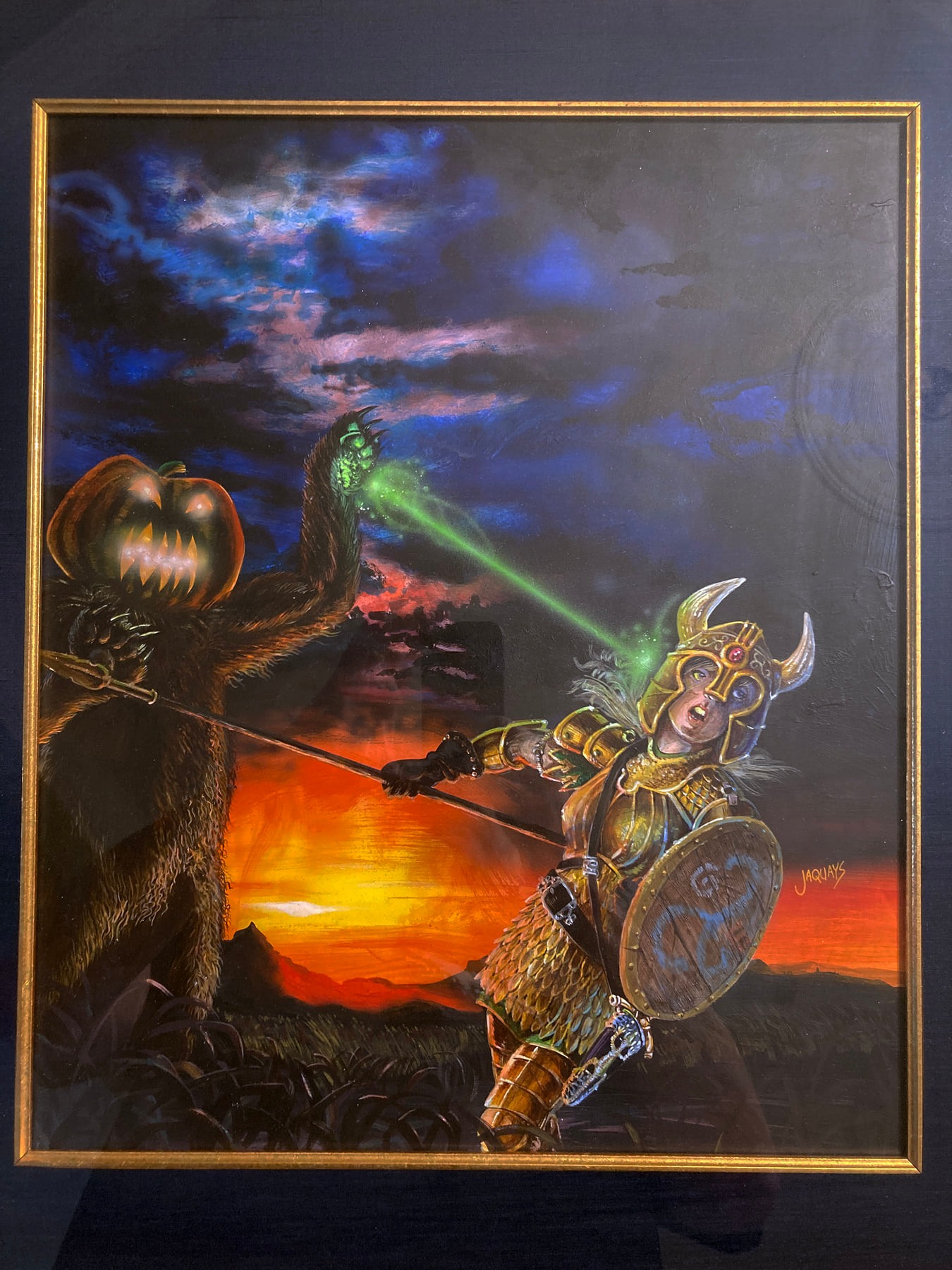