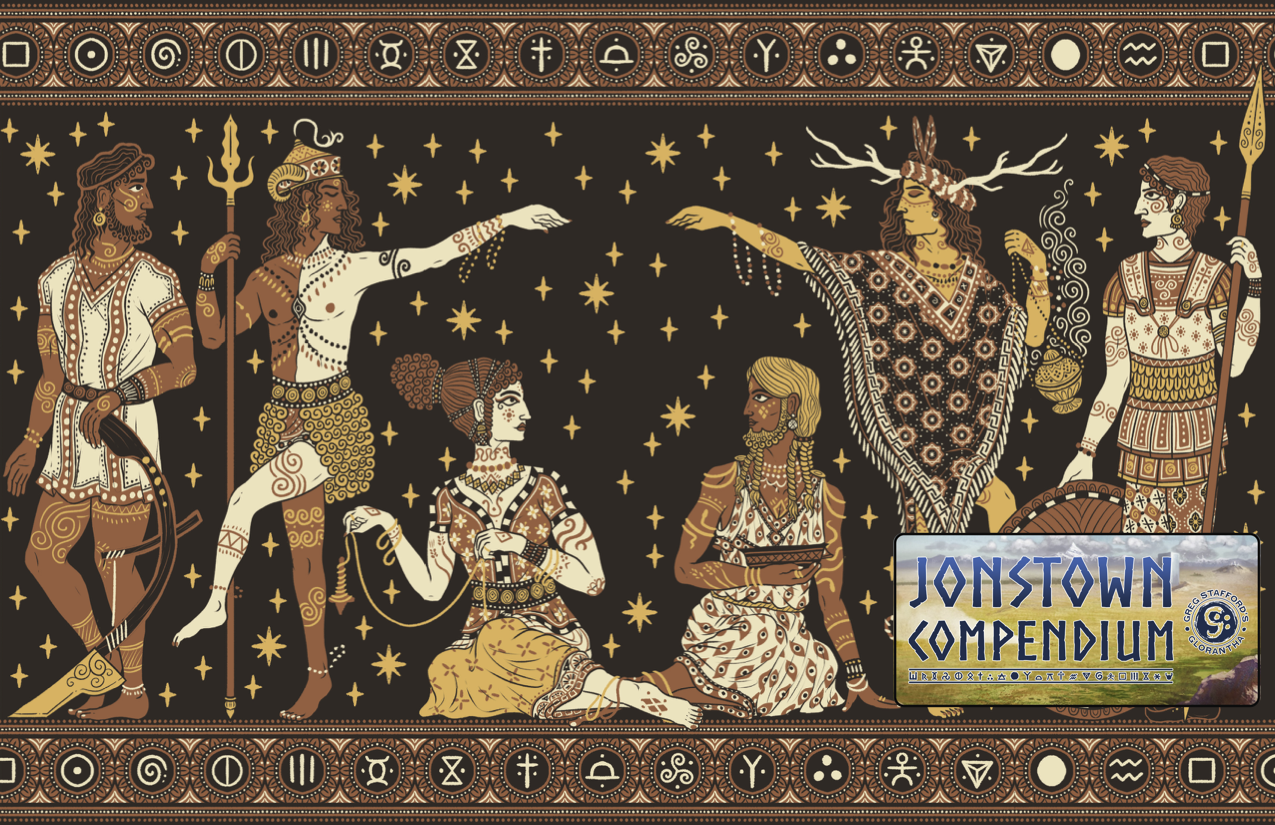 Last week we shared some of the stand-out cover art going on in the Miskatonic Repository! And there's similar great stuff happening in the Jonstown Compendium, our community content platform for RuneQuest! So, this week we got RuneQuest creative director Jason Durall, Chaosium vice president Michael O'Brien, and our community content Ambassadors Nick Brooke, Allan Carey, and Bridgett Jeffries to pick out some of their favourites by indie creators. 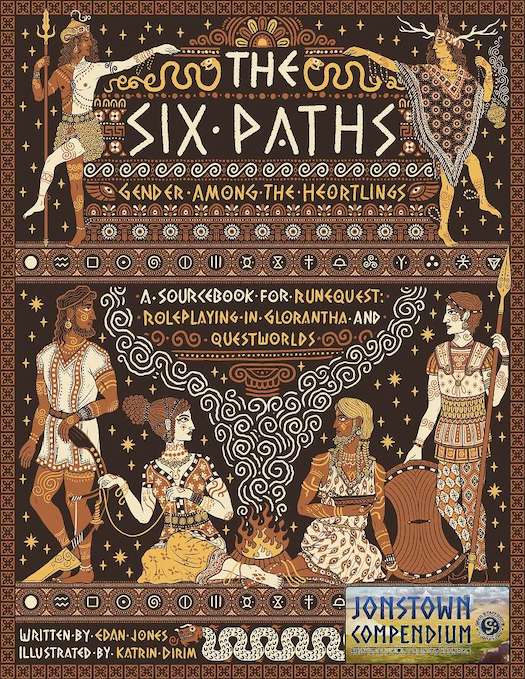 The Six Paths by Edan Jones. Cover by Katrin Dirim.

Jason says, "Not only do I think Katrin is one of the most important artists working in the tabletop games space at the moment, she's also probably one of the nicest. This cover perfectly integrates design and titling, and exhibits a level of quality in presentation above and beyond many professional products." 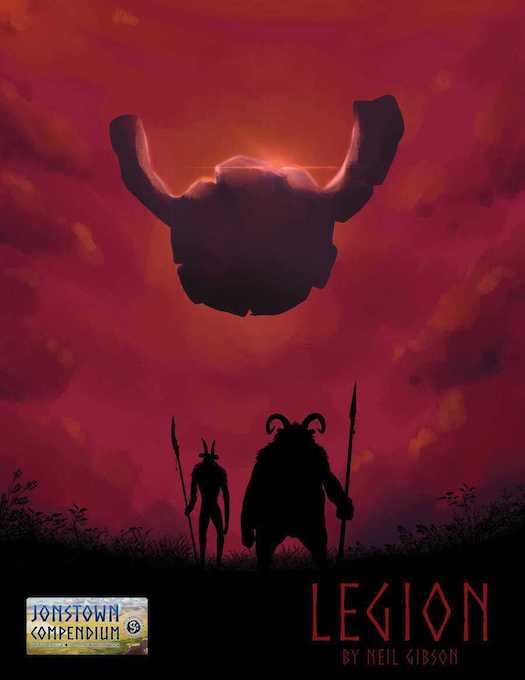 Jason says, "The simplicity of this cover and the feeling of dread it inspires makes it one of my favorites. Clean and eye-catching, it instantly tells you what is inside the book without actually saying anything." 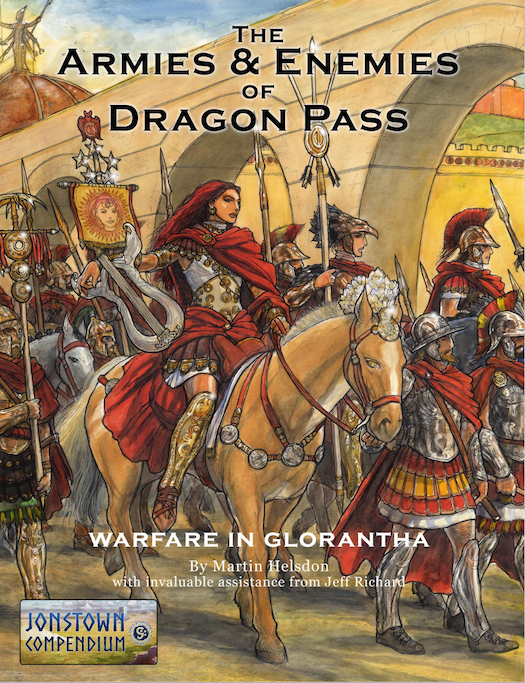 The Armies and Enemies of Dragon Pass by Martin Helsdon. Cover by Mark Smylie.

Jason says, "A military parade in all of its fine panoply sells the "reality" of Glorantha far more than any action sequence might have. Here we have an army at its proudest, either marching in a time of peace or heading out to the battlefield. It embeds me in the setting and makes me feel like I'm a citizen of Boldhome, watching the soldiers and their Queen marching off to war." 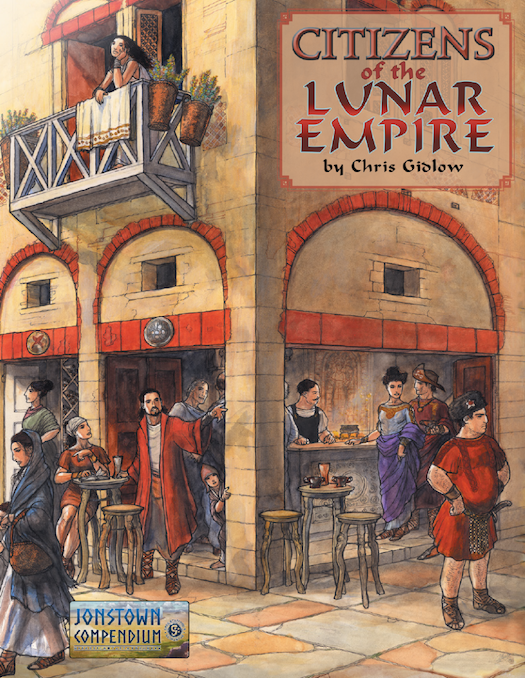 Citizens of the Lunar Empire by Chris Gidlow. Cover by Mark Smylie.

Nick says, "Mark Smylie’s cover brings the corner bar of Chris Gidlow’s insula to life. The artist took great pains to match the author’s description, and even borrowed details from Dario Corallo's interior illustrations of the residents he depicted." 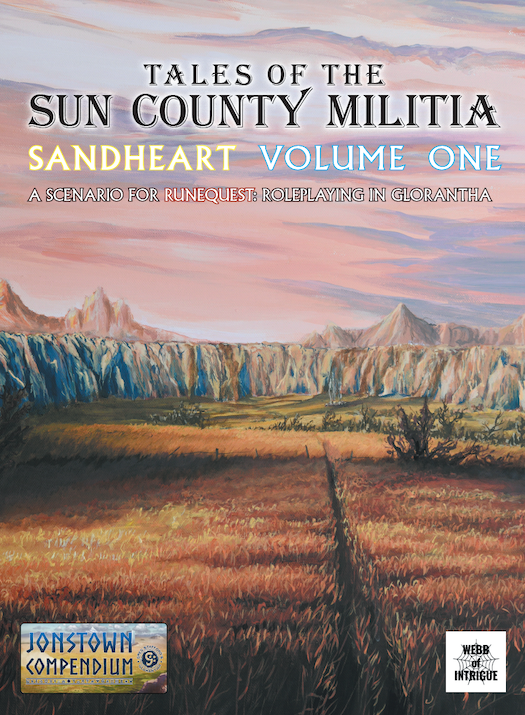 Tales of the Sun County Militia: Sandheart by Jonathan. Cover by Jacob Webb.

Nick says, "An evocative scene that captures the bleak desolation of this border setting." 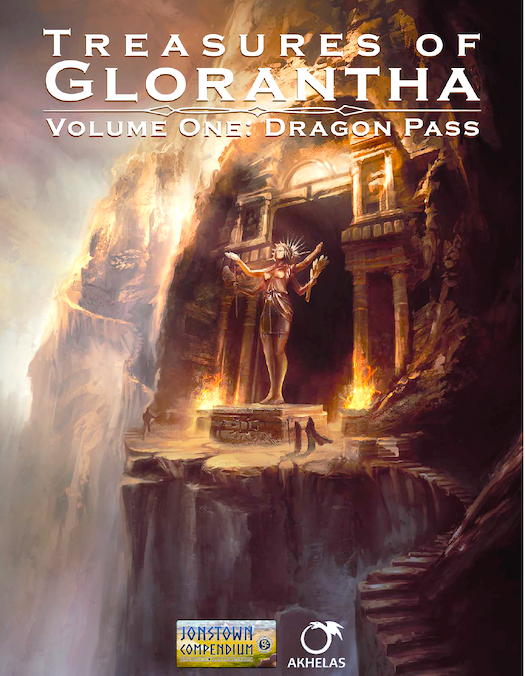 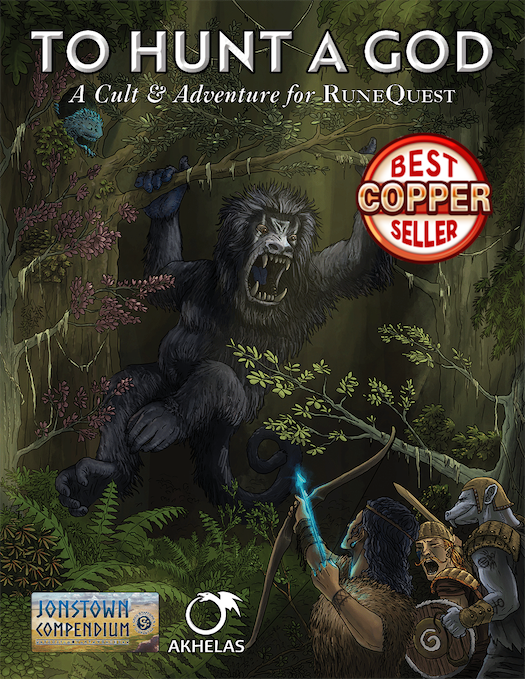 To Hunt a God by Austin Conrad. Cover by Ludovic Chabant.

Allan says, "A well composed cover with a lot happening and little surprises that pop out at you the more you look. It is action packed with the promise of adventure. I also like the title." 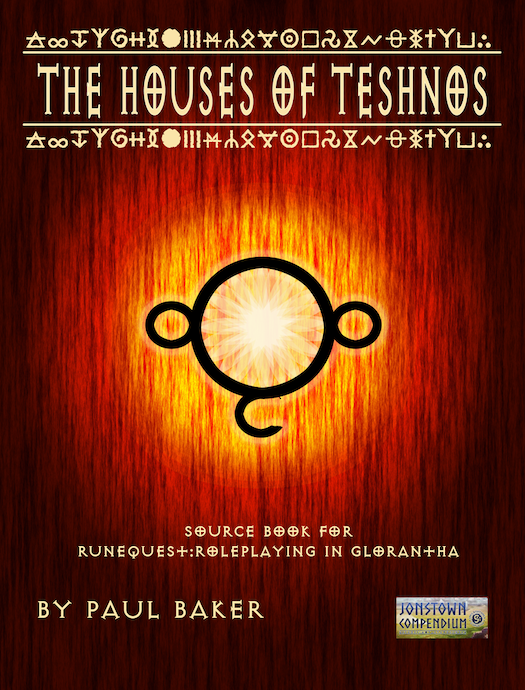 Allan says, "Strong bright colours draw the eye into the centre of this title. A simple cover design that isn't too busy, with a clear title. An instant attention grabber that makes me want to look closer." 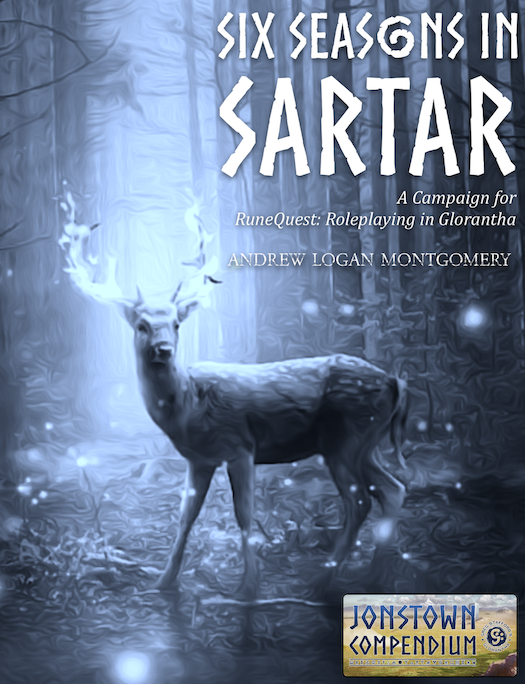 Allan says, "This cover effectively uses a very limited palette, great use of light and dark areas draw the eye from the dear to the title and back again, forcing you to refocus on both. Simple use of some art software image distortion adds a further element of interest and mystery." 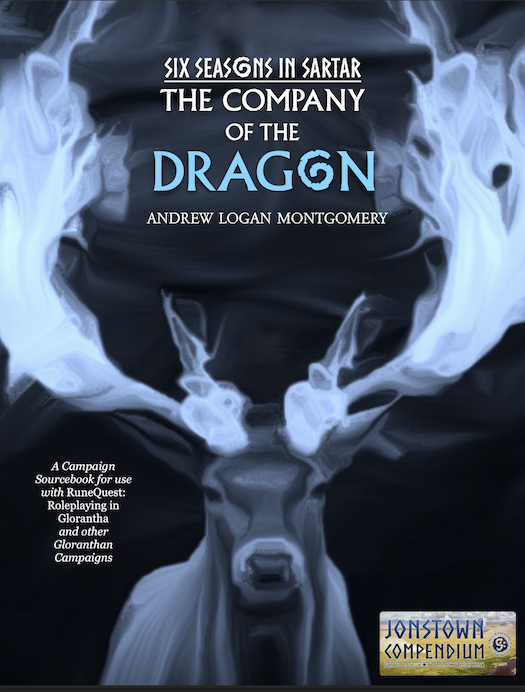 Bridgett says, "This is my currently my favorite overall cover from all of Chaosium's Community Content. It's a show stopper for me. I love the rune use in the title, the mist effect on the antlers, and I absolutely appreciate its unapologetic boldness. I kinda need it on a TShirt." 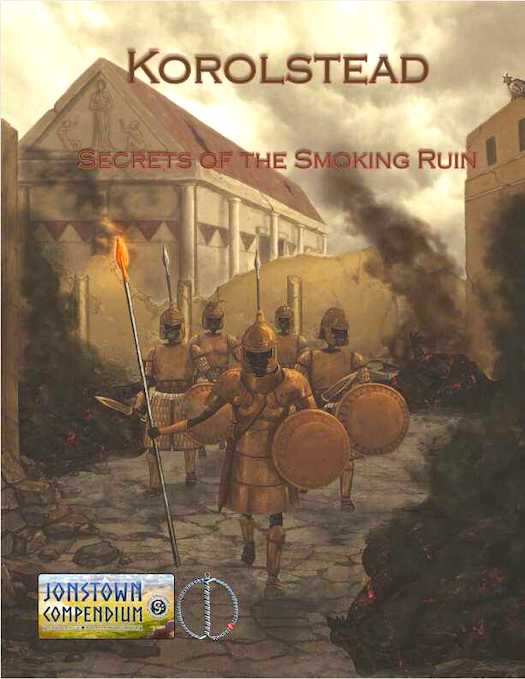 Korolstead: Secrets of the Smoking Ruin by John Lawson. Cover by Silvana Massa.

Bridgett says, "This is another one of those covers that begs for a second, third, and fourth look. I appreciate something different each time. This cover uncovers wounds associated with feelings of rage, sorrow, and vengeance. I don't know what's going on here, but I'm ready to grab a sword, a bow, my crew, and find out." 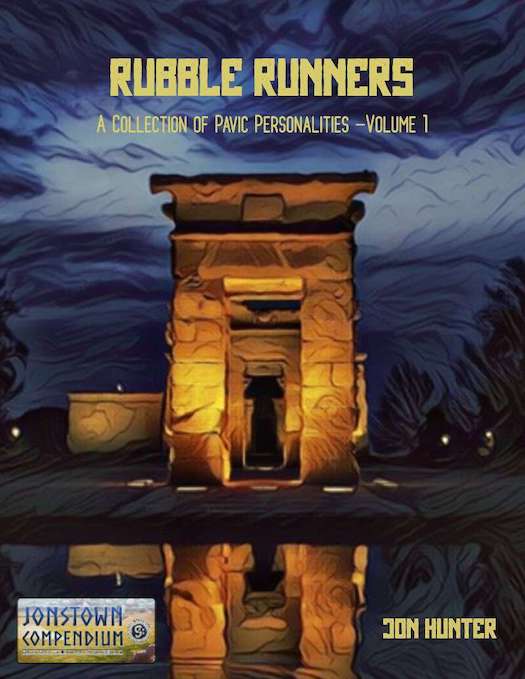 Bridgett says, "There is a a degree of depth and surrealism here that begs the viewer to stop and appreciate. The temple's reflection rests on the surface of the water... but that same aquatic and reflective feel is also present in the night sky behind it. It's gorgeous." 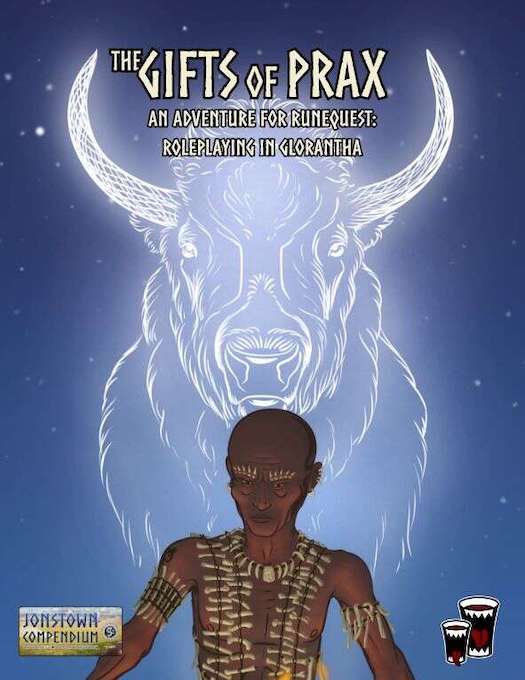 MOB says, "An evocative cover. The radiant spirit bison hints you are in for an otherworldly experience." 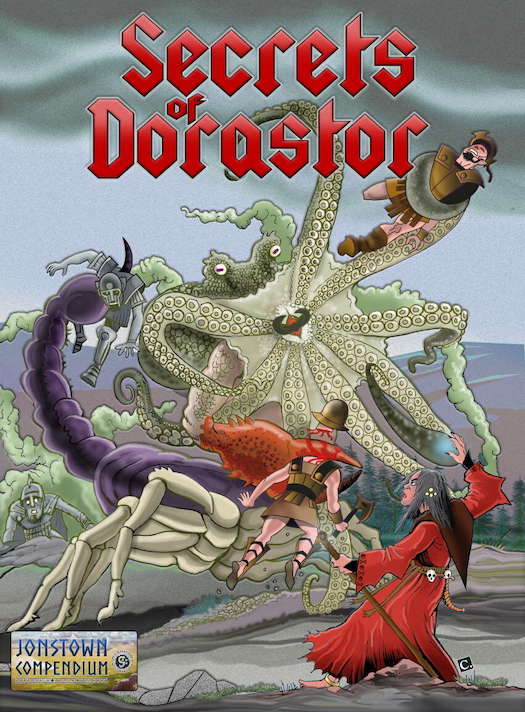 Secrets of Dorastor by Simon Phipp. Cover by Dario Corallo.

MOB says, "An exciting fight scene that clearly shows the deadly reputation of the land of Dorastar is well-deserved (and that RuneQuest combat itself can be quite deadly; hopefully the character in the foreground is about to unleash some mighty rune magic!) 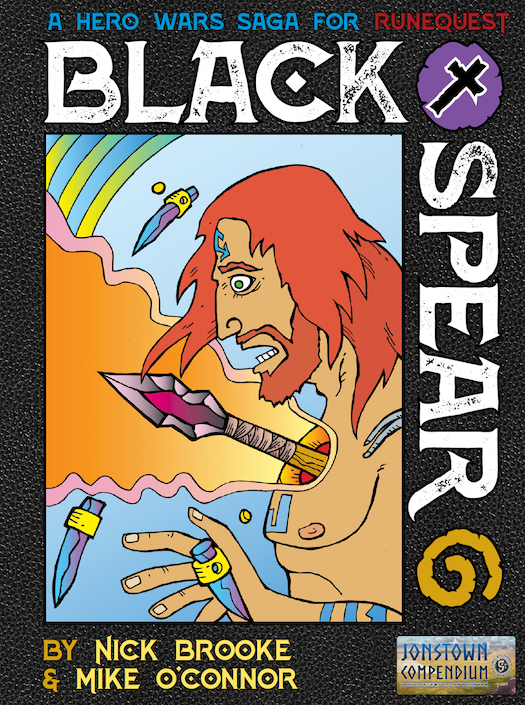 Are you a Gamesmaster looking for new scenarios and story elements? A player looking for something mysterious to spark a character idea? Is your group looking for more Gloranthan goodness to use in your game? The Jonstown Compendium is where you can find — and create — self-published material for your Gloranthan roleplaying games.