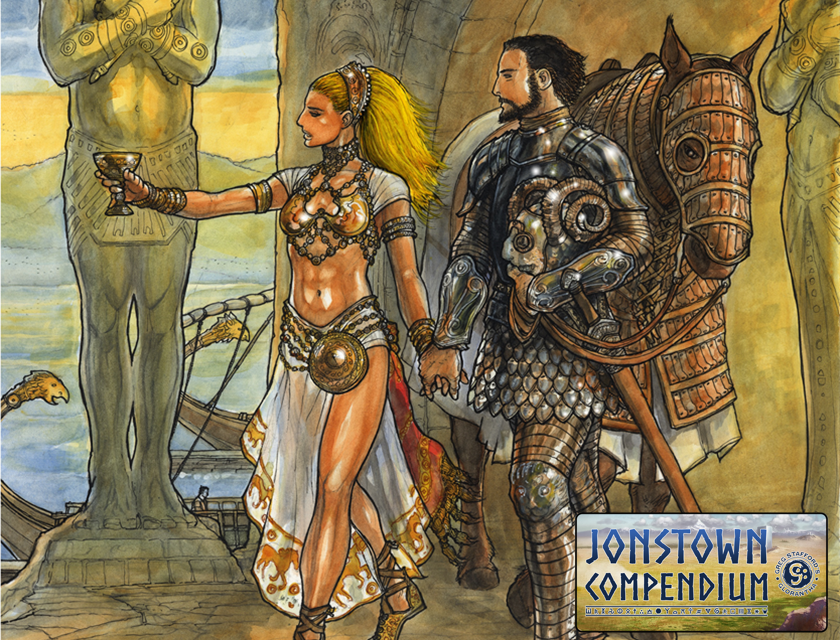 Check out these exciting new releases at the Jonstown Compendium, our community content resource for gaming in Greg Stafford's world of Glorantha! (And if you'd like to become a creator yourself, check out our Jonstown Compendium Guidelines and start creating!)

"She could see them now. A jumble of disparate silhouettes at the edge of the campfire. Through the chittering throng a magisterial figure approached. This broo was considerably larger than any she has seen before. Naked save for a loincloth of indeterminate origin it strode into the firelight. Huge white horns with innumerable carved runes rose from its muscled skull. Pointing an evil, curved blade at Vasana it bellowed 'I am Immortal White Horn, son of Thed and Wakboth’s fist. We have come for you Lightbringer and we are LEGION!'"

The first Sea Season out from under the yoke of Lunar oppression is late in coming. Early crops are slow to germinate, lambs are few and small. The clan’s ancestors are uneasy. A disquiet within the Spirit World, simmering since the Lunar invasion twenty-four years ago is now bleeding into the Middle World. The land is weak because the bond between the living and the dead is strained. An encounter with a melancholy soul sets the adventurers off on a quest to find one soul among the countless lost. Can they find what has been forgotten? Will they have the courage, honour and loyalty to appease the ancestors and stave off a season of hunger and uncertainty?

This adventure explores some of the complex relationships the inhabitants of Glorantha have with the Spirit World. Whether from the guidance offered by a clan’s ancestors, support from cult elementals or as a font of magical power, the Spirit World’s influence cannot be underestimated.

Ready to do the Impossible? Come along and discover the Secrets of Heroquesting in this all-new Jonstown Compedium! Inside you will find loads of secrets for Game Masters and Adventurers alike. Everything from consolidated Rules for HeroQuesting, how to Become a Hero, how to run HeroQuests, assorted HeroQuesting Tips, descriptions of the Planes of Glorantha, and other Secrets of HeroQuesting. All lavishly illustrated with over 35 illustrations.

So whether you are a Humakti lay member wondering what is really going on during those deadly Sacred Time rituals, or if you are an Illuminated Hero looking for clues on how to Heroform, Invoke HeroQuests, or survive on the Other Side while following in Arkat’s footsteps and warping HeroQuests, now is the time to incorporate HeroQuesting into your RuneQuest or QuestWorlds game!

The first of a series of resource books for Runequest GM's detailing an insula or city block that makes up the ruins of the Big Rubble in Prax, set in the rich fantasy world of Glorantha created by Greg Stafford and friends.

Based on real archaeological plans reworked for roleplay gaming, each publication provides a realistic and practical description of a section of ruins with accompanying floor-plans and suggested mini encounters ready for insertion into your campaign.

Seshnela is a land of knights and wizards, of humble peasants and demure damsels. It is a rich land, of cities and farms, of castles and wild forests. Ancient ruins are everywhere, reminders of past glory, and repositories of forbidden, ancient lore, and of their terrible inhuman guardians. Heretics scheme to undermine the foundations of the Church, and witches cackle in the shadows, cursing the faithful.

"One God, One Church, One King!" cry the Rokari, and the people of Seshnela assemble under the banner of the flamesword and the symbol of the Church, ready to bring unity to the world. Whether it wants it or not.

Written for HeroQuest, Kingdom of the Flamesword is the follow up to The Book of Glorious Joy, expanding that non-canonical view of the Gloranthan West to the Kingdom of Seshnela and the Rokari Church.

To outsiders, Jonatela is a grim land, its castles forbidding, the life of its people harsh and lacking in luxury. But this is an illusion; the Jonatings are as passionate a people now as they always were, fond of song and dance, living every moment to its fullest potential. In this lies the strength of its warriors, the practicality of its wizards, and even the determination of its peasants. For every Jonating, no matter their station, knows that the world is harsh and unforgiving. Struggle is a fact of life, and those that submit fall by the wayside and are lost. Battle is commonplace, and pestilence and famine always wait in the wings, ready to sow their own discord.

This is a land of peril and dark passions. A land forged in blood and snow.

Written for HeroQuest, Forged in Blood and Snow is a follow up to The Book of Glorious Joy, expanding that non-canonical view of the Gloranthan West to the Kingdom of Jonatela.

This sourcebook offers a comprehensive history of the Lysang clan and a full presentation of its ring, bloodlines, sacred mysteries (including a fully-developed heroquest) along with simple game mechanics to stage the clan’s political life. Alongside the clan’s economy, a Lunar slave farm receives a complete description. The chapter detailing the neighbouring clans focuses on the Malani tribe recently joined by the Lysang clan.

A Tale of Woodcraft is an adventure ready to drop into any Dragon Pass campaign where there is an elven forest. A chance encounter on the road leads to the discovery of a spy's dead drop, but an elven peace treaty could be jeopardised by where it is left, and the meeting of peace is right here, right now...

This evening-length adventure is designed to slot in to any campaign, for a change of pace while travelling, or as an unexpected opportunity to hunt down Lunars in the local area. Best set shortly after Dragonrise, it is flexible enough to be used anywhere that the Lunars are no longer the dominant force.

Reviews from R'lyeh says: "A Tale of Woodcraft presents an entertaining roleplaying challenge, a mystery, and some action, that all together neatly packaged on route somewhere for easy addition to a campaign.

Filling the Air from horizon to horizon, the noble Storm Rams are a new spirit for your game of RuneQuest. They are the embodiment of rain-giving clouds, found anywhere throughout Glorantha.

Reviews from R'lyeh says, "Storm Rams presents an interesting embodiment of the storms and the rain, pleasingly from differing points of view, which the Game Master can work into her campaign."

This month's issue of Monster of the Month previews material from a forthcoming work for the Jonstown Compendium, Melikaphkaz: the O-God of Traps. Melikaphkaz is a Darkness god worshiped by those who build traps and defenses to create shelter in a hostile world.

The Troupe of Terror presents a gang of six man-eating ogres with which the gamemaster can terrorize their players. Woken to Illumination by the magical performances of the Puppeteer Troupe, they represent the worst evils enabled by that mystical consciousness. Now, these ogres roam Dragon Pass in the guise of minstrels and clowns wielding the reality-warping illusions of the Puppeteer.

In one night, after days of heavy rain, an unholy pit will open up under a city street and swallow a house whole. The City Guard, desperate to evacuate the street, finds a household, three doors along, refusing to leave. It is The House that Was Always There, known to be house of charity, a home for orphans. To save lives, the adventurers will be tasked with this life or death diplomacy ~ and depending on their talents, will either be invited in through the front door, or will crawl up through the basement through a horrific charnel pit.

For a party of adventurers set in any large city in Esrolia or Sartar, this novel adventure will seamlessly fit into any campaign and provide a taste of the West!

Prior to the Ulerian holy week, the peaceful community of Apple Lane comes together to celebrate the upcoming harvest with a festival of thanks. The children of the community recreate the classic Lightbringer Quest under the watchful eye of the local Thane.

This year however, something is different. The children chosen for the quest seem to resemble the gods, important digntaries from Clearwine and Kero Fin actually show up. The adventurers must keep the festival peace, entertain and impress high profile guests, lead the children on a quest and everyone had better enjoy themselves. How hard can it be?

This simple supplement provides all of the nonplayer characters published by Chaosium in the chapter “Gloomwillow’s Hollow,” from The Pegasus Plateau. Using the same printer-friendly non-player character format as used in Akhelas’s series Monster of the Month, this product ensures you’ll not feel the urge to scribble spell effects, limbs lost, or magic points spent on your nice, shiny, hardcover books. NB You need to own a copy of The Pegasus Plateau to make full use of this product.

The Beastmen of Beast Valley, and some werebeasts for your VTT games in Glorantha. Dario Corallo has created a series of counters for play with Virtual Tabletops. (Now more than ever, it can be difficult for you and your friends to get together in the same place for a session of tabletop roleplaying, and playing online is one solution. For an introduction to using VTTs, see the helpful "Online Gaming - Getting Started" introduction our line editors have put together.)

This slim illustrated booklet explores the use of the mighty war elephants of Fonrit, one of the regions of the southern continent of Pamaltela. It explores the diet and training of the feared shovel-tusker elephants, and their use on campaign and when deployed in battle.

The timeless appeal of the legends of the Hero Wars has resulted in an enduring interest in the period.
Surviving texts, supplemented by archaeological evidence, are used here as the basis of this reconstruction of the combatants of the initial phases of that world-shattering conflict.

This volume is a companion to Martin's Helson's 2020 Greg Stafford Award for Gloranthan Fandom-winning title The Armies and Enemies of Dragon Pass.