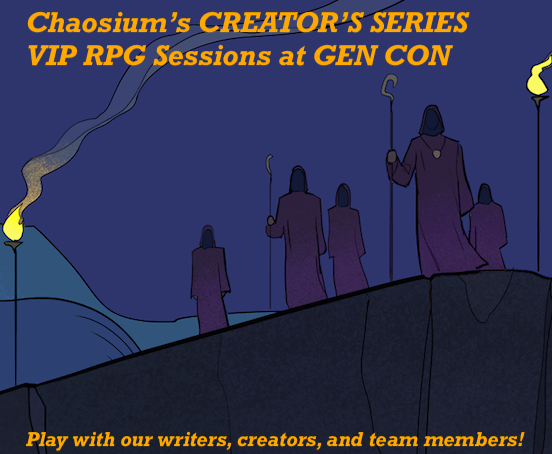 New Chaosium VIP Creators Series sessions are now live on the Gen Con events booking system. Each game has one of our own team or writers in the GM/Keeper's chair. Get in early, these sessions are sure to book out fast!

Set in the 1920s, the mystery begins in the home of one of the investigators. After dinner, you're all gathered around the table, when one of you brings forth a curious wooden box. Part of Chaosium’s “Play with the Creator!” block of events with GM writer Paul Fricker.

Traveling through the mountain range to the west of the Beast Valley, the adventurers have a most unusual encounter, putting them in possession of a particularly peculiar burden. Caught between rivals seeking to claim this rare prize, the adventurers must determine its ultimate destiny: whether they will use it serve a rival clan or their own, to assist a forgotten god and its few worshipers, or to shape the very fate of the world. GM is RuneQuest line editor Jason Durall.

You thought you were just attending the heroquest ritual meant to cement Starbrow"s ascension to the throne of Sartar. Suddenly, you find yourself investigating the death of one of the vital participants in that heroquest. It is only a few hours until the ritual begins. The future of Sartar may depend on what you discover. GM'd by RQ Co-Creator Steve Perrin.

Against all odds, Sun County, on the borders of the badlands of Prax, remains staunchly settled, ordered, and civilised, having resisting nomads, famine and drought for centuries. With the overlords of the Lunar Empire now driven from the region, how will these stubbornly independent farmers face the new threats that challenge their very existence? Chaosium intends to audio record this game session with Michael "MOB" O'Brien as GM.

The governor of Five Sails has been murdered! The city’s factions rush to fill the vacuum while others seek answers to how and why the murder took place. Meanwhile, powers outside the city see an opportunity to claim the valuable port once and for all! - Run by 7th Sea Creative Director John Wick.

It is the sacred time. Riders from across Prax have gathered together to celebrate and worship at the Paps. None of them expect a bizarre declaration from the High Priestess of the Herds. A contest is called. Whichever tribe can capture the most cattle in the upcoming raiding season, will be crowned Khan of Khans. Gather up your riders and make haste! The fate of your tribe lies in your speed and skill at arms. Will you have the strength to forge the future of Prax? Part of Chaosium’s “Play with the Creator!” block of events. GM Digital Content Producer James Coquillat.

Big Enos wants to drink corn taffa at the earthshaker festival, but in 1626 Sartar it is illegal to sell taffa east of the glow line without a permit. Your company has secured a Lunar wagon train of the pungent corn beer. Now for the hard part, getting all three wagons back to the Shaker Temple in time for the ceremony. Can you get the beer to priestess Enos and her dinosaurs before the furious lunar priestess catches you? Game to be mastered by Chaosium’s actual lunar priestess in full ceremonial attire.

The peaceful island of Wag Laan sits in the gentle waters of the balmy Suam Chow, the great inland sea of Kralorela, the Empire of Dragons. Fisherman and rice farmers work the water and land, all governed in peace by the wise and wealthy Nong Clan, but discordant struggles belie the calm and threaten everyone. Who is a hero? This scenario is for RuneQuest Glorantha and incorporates a preview of the new Draconic Mysticism rules. Guest DM author David Millians.

Plus these additional gaming sessions have been added:

It is wintertime in Camelot, and Queen Guenever is hosting a grand feast! After three days of festivities, the knights judged most courteous will have the honor of being named a Queen's Knight for the year. Can you impress Guenever and earn the honor for yourself? This scenario uses rules from the Book of Feasts, which will be taught if needed.

For centuries, a mysterious force has guided Theah’s destiny and this force has decided a small band of heroes has seen too much. They are no longer playthings but pests, and that means their time has run out. Can your Heroes survive the invisible menace known as “Novus Ordo Mundi?” Can they do more than survive? Can they put an end to this invisible threat once and for all? It is time to find out.

The Lunar Empire seeks to plunder the draconic secrets of Wyrmghost Ruins, seeking magical secrets that could further its conquests in the Holy Country and beyond. Minaryth Purple wants you to acquire the secrets first - he has own plans to use draconic powers in the struggle to liberate Sartar. The ruins are cursed, and haunted. The local clans too frightened to go there. Can you survive to plunder the secrets of the EWF?

"A dozen peasants exit the buildings, one of the men striking a battered and rusting Saxon helmet with a hammer. A moment later, a knight wearing mismatched armor and riding a sway-backed horse appears on the road ahead on you. His shield bears no coat of arms. 'You will be allowed to leave peaceably if you pledge to aid the village of Cherryhill when called,' he commands in a booming voice." Who is this motley knight and why does he command such respect from the villagers? You will tell that story in Prince Valiant.

nb These VIP Creator Series sessions were added earlier, and are already SOLD OUT.

In Prohibition-era Chicago, a visit to a speakeasy leads a group of entertainment-seekers to the city's darkest corners and strangest inhabitants. Based on the Corpse short story cycle by James Lowder, who is also your GM. Part of Chaosium’s “Play with the Creator!” block of events.

The folklore of the British Isles is deeply ingrained and is often seen in various aspects of daily life. Called to the village of Shundale for the funeral of a departed friend, the investigators find themselves the centre of attention. How did their friend die? Why isn't he buried in the churchyard? Why are strange city folk asking curious questions? And where are the children? Secrets of the past cast long shadows. Set in the wild heart of the Derbyshire Peak District in the 1920s, will you partake of the fruit from the Black Orchard? Part of Chaosium's "Play with the creator!" block of events. GM is CoC Line Editor Mike Mason.