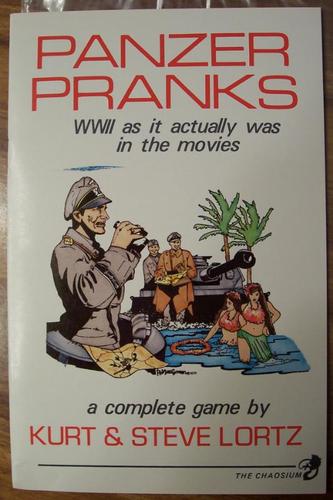 Chaosium is saddened to hear of the death earlier this year of Steve Lortz. Steve was part of the Chaosium team way back in the 1970's. With his brother Kurt, Steve created the now legendary 1980 game Panzer Pranks (tagline: "WW2 as it actually was in the movies").

An entertaining satire, Greg Stafford recounts that Panzer Pranks "violates just about every convention of standard board war games. For instance, movement points can be saved up from turn to turn and all expended at once. It has line of sight rules, so that hills or terrain obstacles obstruct sight. However, by stacking the unit counters on top of each other the top unit can see over the obstacle. Tanks can make bank shots off the edge of the board."

Steve's first Chaosium release was Perilous Encounters (1978), a set of beginners' rules for wargaming. He also assisted his brother in the development of Dark Worlds, the initial Lovecraftian RPG pitched to Chaosium, before Sandy Petersen totally reworked the concept into Call of Cthulhu.

Steve also was a prolific and skilled sculptor of miniatures, especially for Lance & Laser's HeroQuest line of Gloranthan miniatures.

Kurt Lortz died in 2006. Valedictories for both Steve and Kurt talked of how much they enjoyed wargames, boardgames, minies and RPGs, and sharing their passion for gaming with others.

Vale to the Lortz brothers!—avid gamers, imaginative co-creators, and part of the early history of Chaosium and RPGs.