The RuneQuest Playtest Manuscript book is a 250+ page hardcover book currently on offer in the RuneQuest Classic Kickstarter. It was created from high resolution scans of the original playtest manuscript, which has been lovingly kept in a binder for the last 40 years. The book also features newly written introductory essays by Steve Perrin and Greg Stafford.

Here’s an edited excerpt of Steve Perrin’s piece. His full account runs to some 4,500 words.

Excerpt from Creating RuneQuest, Through Glorantha with Sword and Crystal
By Steve Perrin

I first met Greg Stafford through his board game, White Bear and Red Moon. Greg independently published it out of a small house near the Oakland Airport. It portrayed a fantastic world full of wonderful concepts like the Red Moon’s variable power, Cragspider, Sir Ethilrist’s Black Horse Troopers, Dragonewts, and many others. The game concerned the efforts of the Lunar Empire to conquer legendary Dragon Pass and the brave barbarian warriors of the Kingdom of Sartar…

…Greg moved in the same science fiction fan circles I did but our paths had not crossed. I was mostly involved with the Society for Creative Anachronism, which was really just starting to go national at the time. Greg was not part of that group. So despite mutual friends and acquaintances we had not met.

Greg and I met physically at a D&D game a few months later. My friend and fellow wargamer Clint Bigglestone ran into him at a fan party and invited him to guest at one of our regular Monday night D&D games. Greg invited our group to come help playtest his Nomad Gods game, a sequel to White Bear & Red Moon set in the neighboring desolate Plains of Prax. I began to appreciate just how much creative energy he had put into these games, and the world of Glorantha they were set in.

On July 4, 1976, as the United States of America celebrated its 200th anniversary, we were introduced to the first stage of “The Chaosium’s role playing game.” It looked a lot like D&D, with classes and experience points and saving throws, but it had one feature that I immediately picked up on.

Fired up by this concept, I started working with this group…

Steve goes on to recount, in entertaining detail, such things as: 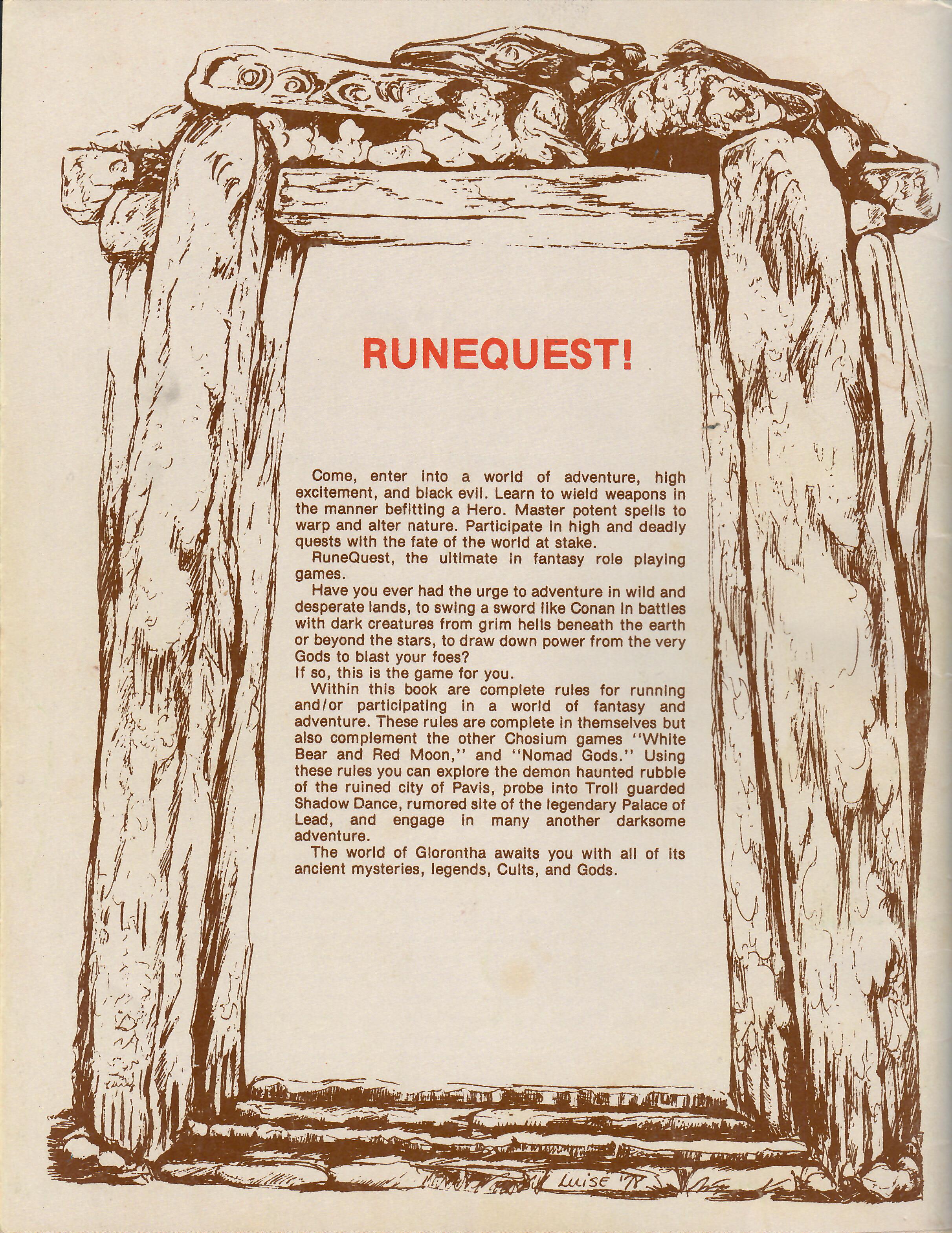 In his conclusion Steve writes, “Since the debut of RuneQuest, and particularly the second edition, my life has been especially fulfilled. I established friendships that are still active forty years later and established a name in the game business that has held me in good stead for the whole 40 years. I am very pleased this new issuing of the RuneQuest 2nd edition makes available what many fans tell me is their favorite edition”.

This is a highly entertaining personal story of the genesis of RuneQuest by one of its principal authors, offering fascinating insights into the development of the game. The full account is available in the RuneQuest Playtest Manuscript, along with a similar piece by Greg Stafford.