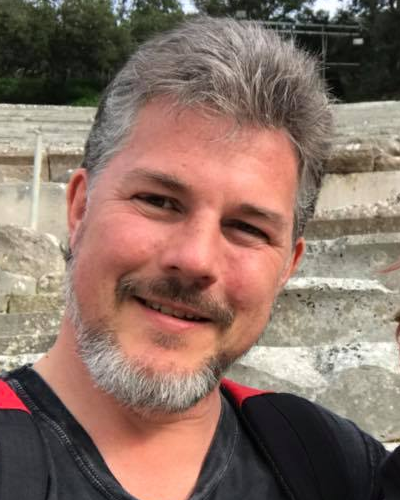 Nick Brooke is part of our Community Ambassador team. Although Nick is happy to assist creators in all of our community content programs at DriveThruRPG, his particular interest is the Jonstown Compendium, Chaosium's program for independent creators of gaming material for RuneQuest and Greg Stafford's world of Glorantha.

In 1991 Greg Stafford introduced Nick to David Hall, founder of the influential Gloranthan gaming zine Tales of the Reaching Moon. For the next decade Nick helped produce the magazine and the Convulsion UK gaming conventions. Nick co-wrote two live-action Gloranthan games and was a prolific contributor to the RuneQuest and Glorantha mailing lists and conventions, hosting Cultural Exchanges, Storytelling Contests and Singalongs in the UK, North America, Australia and Germany. In 2020 he published A Rough Guide to Glamour on the Jonstown Compendium: the community content site’s first Gold best-seller and first product available as print-on-demand.

Born in London, Nick studied ancient and mediæval history at Balliol College, Oxford. He has worked as a chartered accountant, business process analyst and internal auditor. Nick is married to Julie, and lives in Lewisham, south-east London.