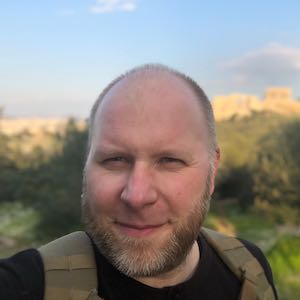 Man of many hats. Chaosium director of operations.

Michal started his RPG journey in the mid-'90s with Call of Cthulhu and Warhammer Fantasy Roleplay. He became a dedicated RPG gamer involved in his local gaming community, and was one of the coordinators of the large "Poland by Night" Vampire LARP series in the early 2000s. In 2004 he joined Q-workshop, the unusual dice manufacturer, taking care of sales, distribution, licensing and much more, eventually becoming Q-workshop's COO for the last couple of years.

In 2009 Michal founded Black Monk Games, the Polish publisher of board games and RPGs and, together with the team, in 2018 ran a hugely successful crowdfunding campaign to publish Call of Cthulhu 7th Edition in Polish. Michal's most recent project is CarcosaCon, the international Cthulhu gaming convention in medieval Czocha Castle, Poland.

Michal resides in Poznan, Poland. Enjoys traveling and good local food. With his wife Daria they are proud owners of a small zoo - 2 husky dogs and 2 cats.