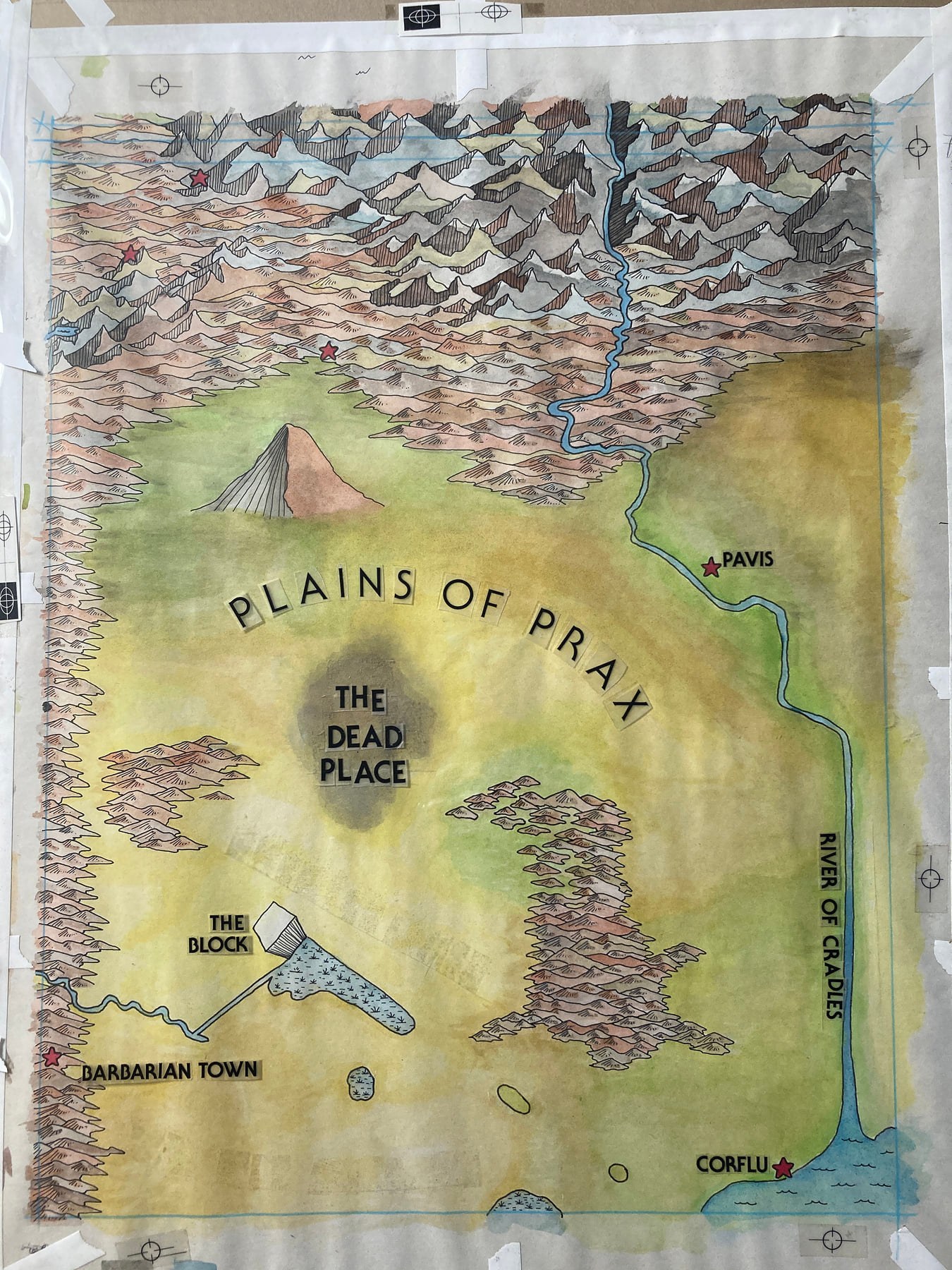 I can't imagine playing RuneQuest in Glorantha without Cults of Prax. Fortunately, when our GM Tim Webster introduced us to the game he already owned it.

Cults of Prax and the RuneQuest 2nd edition rulebook both debuted in October of 1979. They were both instant hits with 1297 and 1192 sales respectively in their first month on the market.

The first printing of Cults of Prax featured Steve Swenston's painting of Issaries Merchant Biturian Varosh and Norayeep. I am still trying to track down when the second printing with the Prax map cover by William Church was produced. It was probably mid-1982, as that is when it was assigned the product number 4008, as opposed to referring to it as "Source Pack" SP7. The first printing of 5000 had sold out in less than 3 years.

Earlier today I saw some speculation as to when the Games Workshop version of Cults of Prax was published. As luck would have it, I managed to track down some fairly specific information. In the GW Mailing Club Newsletter #3 (Aug/Sep 1982) Steve Jackson (the UK one) said they were "almost ready" to print the UK edition now that the new US edition was finally made available to them. (BTW the info in the lower right boxed text packs a lot in for just a few short paragraphs. I have a bunch of these mailing club newsletters and they showcase a wonderful snapshot of Games Workshop in the early 1980s. And of course it just happens to mention one of the legendary "what never was" supplements: Under the Red Moon...) 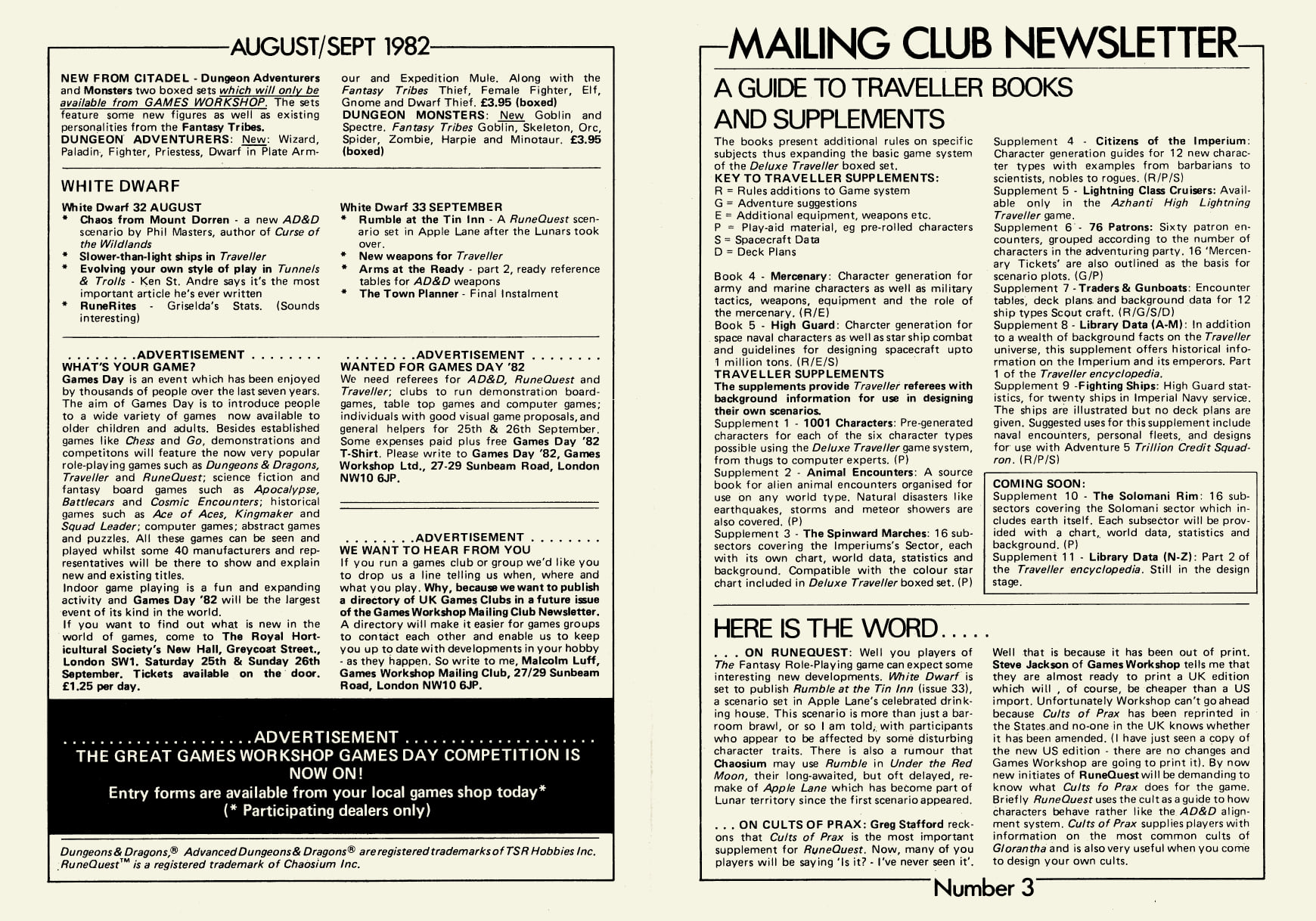 Here are the first and second US printings of Cults of Prax, plus the sole UK printing by Games Workshop. The only substantial change I could find in the UK printing, besides being printed on taller A4 sized paper, was that they updated the list of printed publications to include what had been published in 1980 and 1981. They also moved that appendix to the last page of the book. 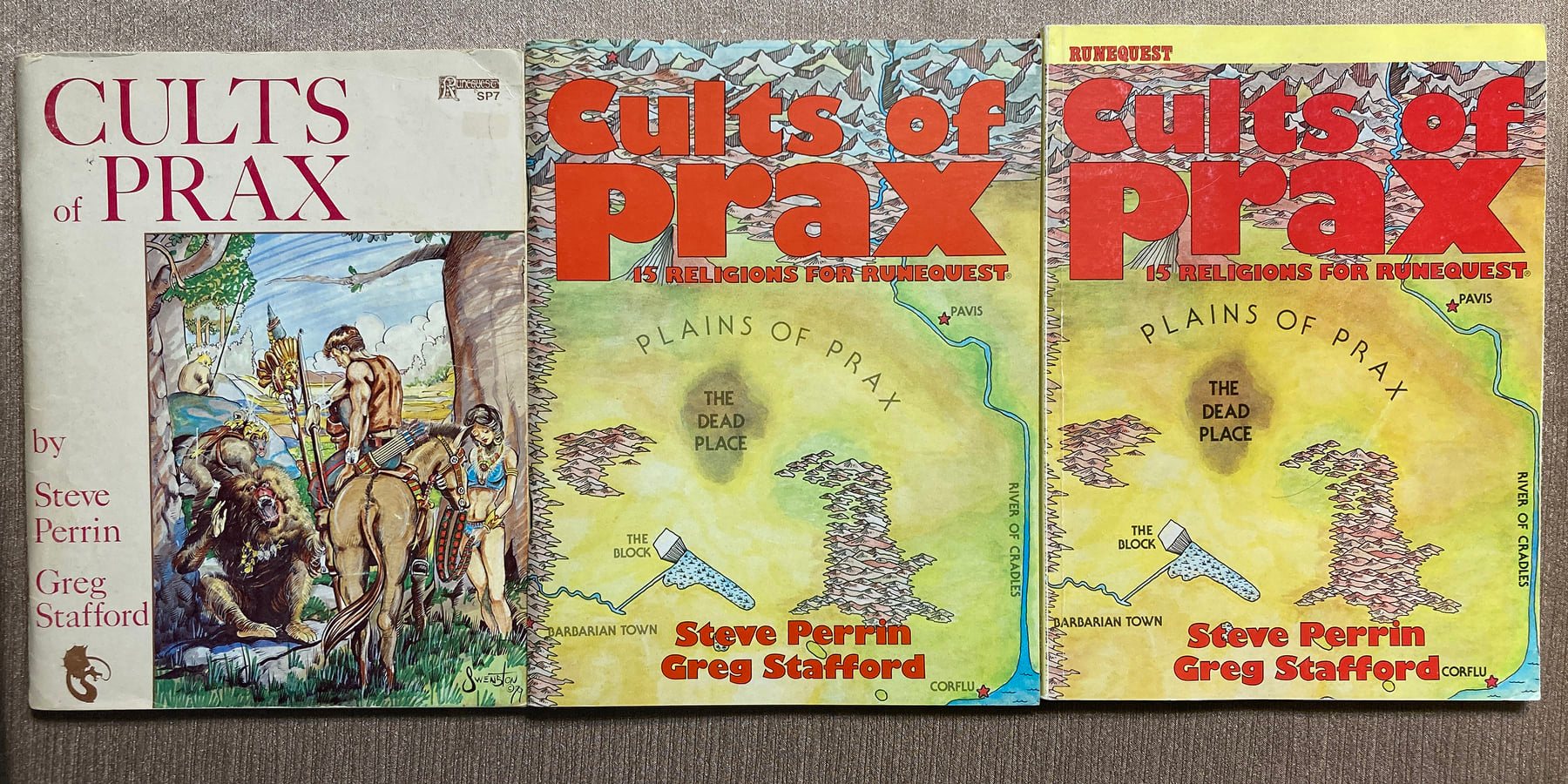 At the top of the page is the original William Church map done in ink and watercolors. It has a transparent layer on top of it for the Letraset letters used for the places on the map. The map itself is in better condition than my photo makes it look. As far as i know, this is one of the last pieces of art William did for Chaosium before focusing on his main profession of carpentry and house construction.

And here we have an untrimmed cover of the first printing, complete with the trim lines in the corners. Chaosium must have had a number of these left over as they used them as folders for paperwork! 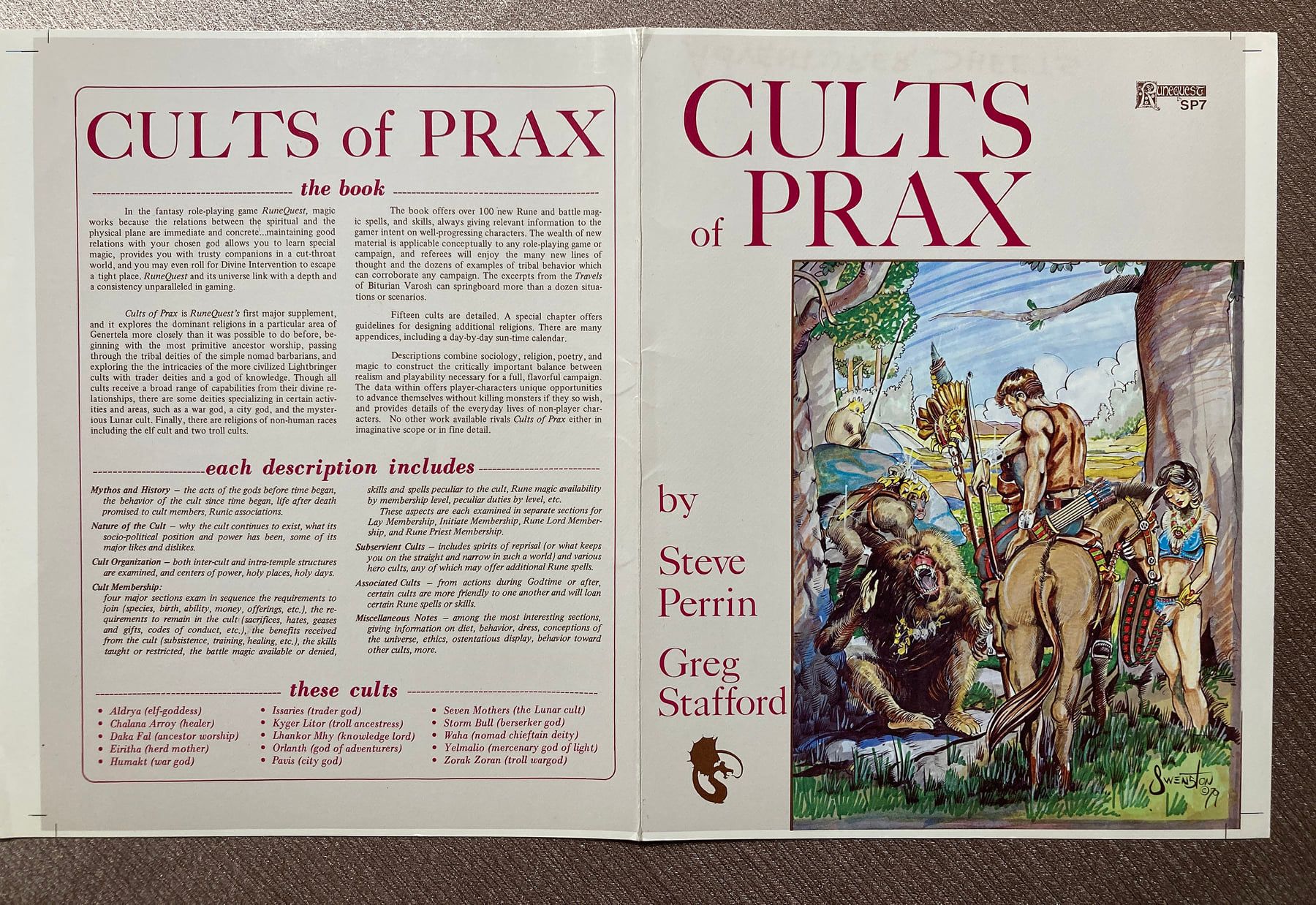 The contents of all three versions of Cults of Prax have no noticeable differences beyond a bit of legal wording and such. The second US printing must have been rushed because they didn't even update the cover artist credit! Greg Stafford reckoned Cults of Prax was the most important supplement ever done for RuneQuest - and the critics both then and now agree with him. It's very safe to say he and Steve Perrin got it nearly perfect the first time around. That's why it remains as iconic today as it was over 40 years ago, and one for the ages...

P.S. My copy of Cults of Prax was one of the first things Greg autographed for me when I met him for the first time at RQ Con 1 in Baltimore, January 1994. I brought a whole comic book box containing my RQ2 collection and Greg graciously chatted with me about RQ for about an hour. He kindly autographed many of them as we looked at each book.

Greg chose the message. My, doesn't 28 years go by in a blink. 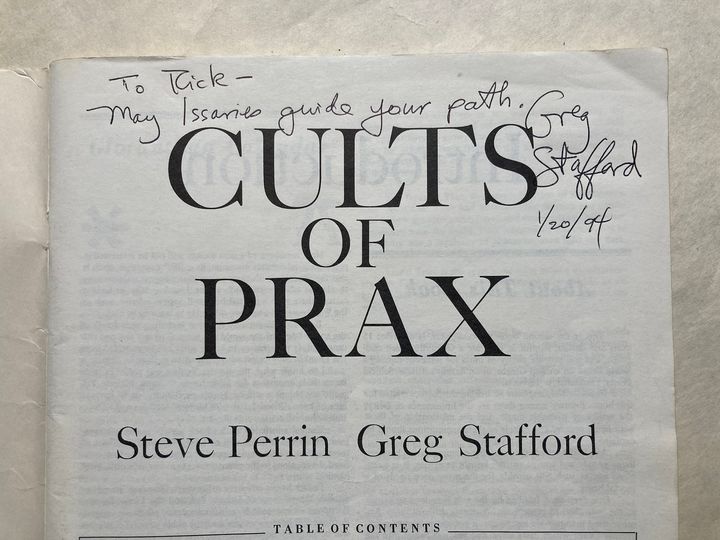 Get your own copy of Cults of Prax 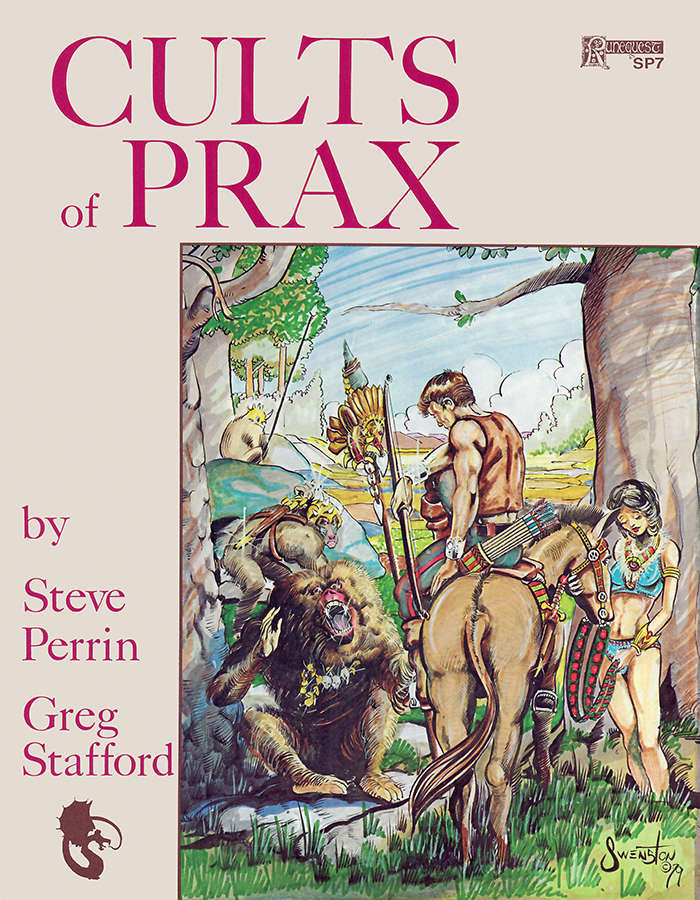 "A true classic of the early days of the hobby. ...quite rightly considered one of the best treatments of religion in a fantasy RPG ever written and it's certainly one of the most inspirational." — Grognardia.

Cults of Prax is back as part of the RuneQuest Classics line, and is easily compatible with the new RuneQuest: Roleplaying in Glorantha:

This version is fully-remastered and true to the original printing.