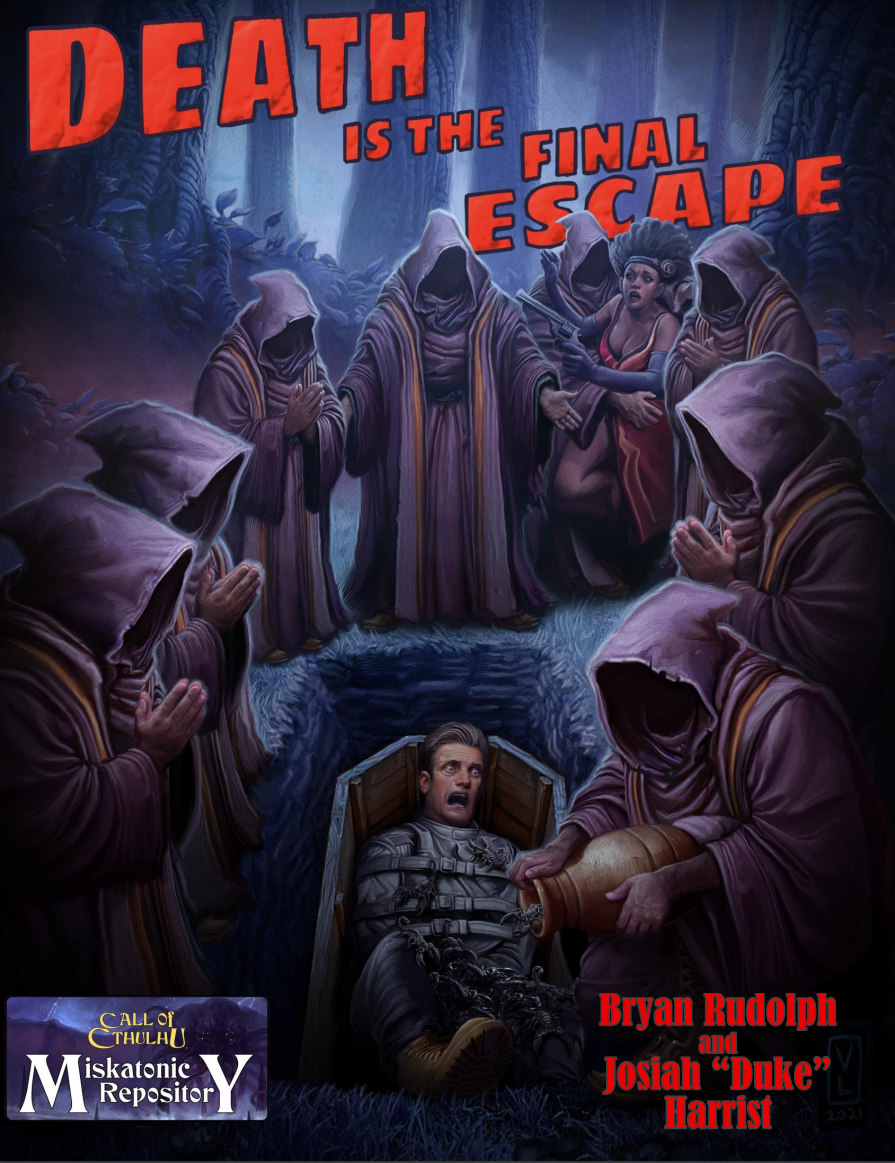 Here are the latest releases from independent community creators!

The investigators find themselves researching a murder-suicide involving a famous escape artist. The story explores vaudeville in the early 20th century, as well as a power struggle within a dangerous cult. This spine-tingling scenario features a car chase, body horror, tense negotiations, and moments of deadly combat. Depending upon the choices of the investigators, it may culminate in their needing to perform an escape artist act of their own!

The year is 1916. Something moves through the German and Allied fronts, a daemon of decay and malice that seems to be the brutal spirit of the war come to life. Intent on inflicting death upon any hapless soldier that finds theirself in its path, the beast pushes northward, an army of vermin at its back spreading death and disease in its wake. In the heart of war, there is only darkness.

The HMS Bonaventure has finally arrived in Boston Massachusetts. It has been missing for five years. As it arrived in Boston Harbor many attempts to contact the ship have failed. The investigators of NESI are brought in to ascertain what has happened.

Ipswich, Massachusetts. December 1922. Investigators follow two cryptic letters to a Colonial-era homestead-turned-hotel which floats more than a cultural past. Amid the foul odor coming from the well and rumors of hauntings and a shipwreck, they are barely treading water in the sea of secrets harbored at the Hart House.

Continues from the first adventure, Taken For Granite, or can be played as a solo adventure. Players choose one of two paths which ultimately leads to altering the fate of the unchosen path.

The investigators are members of a federal agency tasked with fighting the supernatural. They are called in when a symposium hosted by Professor Simon Cutler, a renowned astrophysicist, is the scene of a horrific crime. This leads them on a wild ride that covers only a few hours of in-game time as they chase the perpetrator and try to prevent the awakening of Hastur.

The Mob and Cults!? Explore the town of Rockdale searching for a wanted criminal, but just beneath the surface is a much darker community.

In a search for deeper artistic insight, a sculptor has opened himself to the King in Yellow. The Tattered King has given the artist understanding into the nature of reality far beyond that which humankind was meant to comprehend. Pouring this sense of awe into his work has elevated Hildred Santo to fashionable new heights in the art world, but the King’s hold and the lure of Carcosa is proving strong, and now the artist’s visions, dreams and memories have been made manifest in his studio. The doomed artist wanders in this space between this world and Carcosa. It is up to the investigators to cross over into that world and bring him back.

The investigators have been hired to evaluate a rundown caravan park in a remote Scottish glen to determine if it's a suitable site for a brand-new resort. Little do they know that the Glen is a magical place, inhabited by Faeries and Kelpies. But something has disturbed this tranquillity: a dead body is washed up on shore and there is something in the water. Will the investigators complete their assessments? Or will they be drowned in the darkened waters of the deep Loch?

After missing for two years, the world-famous and reclusive action figure designer Rick Peters has reappeared, seemingly a different man. But who is he now? Why is he so interested in the local infant population? And just what the heck are those things down in his basement? The clock is ticking. Will the investigators be able to solve the mystery before the very punctual arrival of sinister individuals determined to do them harm?

This will make your life easier – using the scenario "Crimson Letters", from the Keeper Rulebook, I produced this character illustration pack. Otherwise, creative Keepers can also use this package to set other scenarios of their own, since there is a very interesting extra content folder. 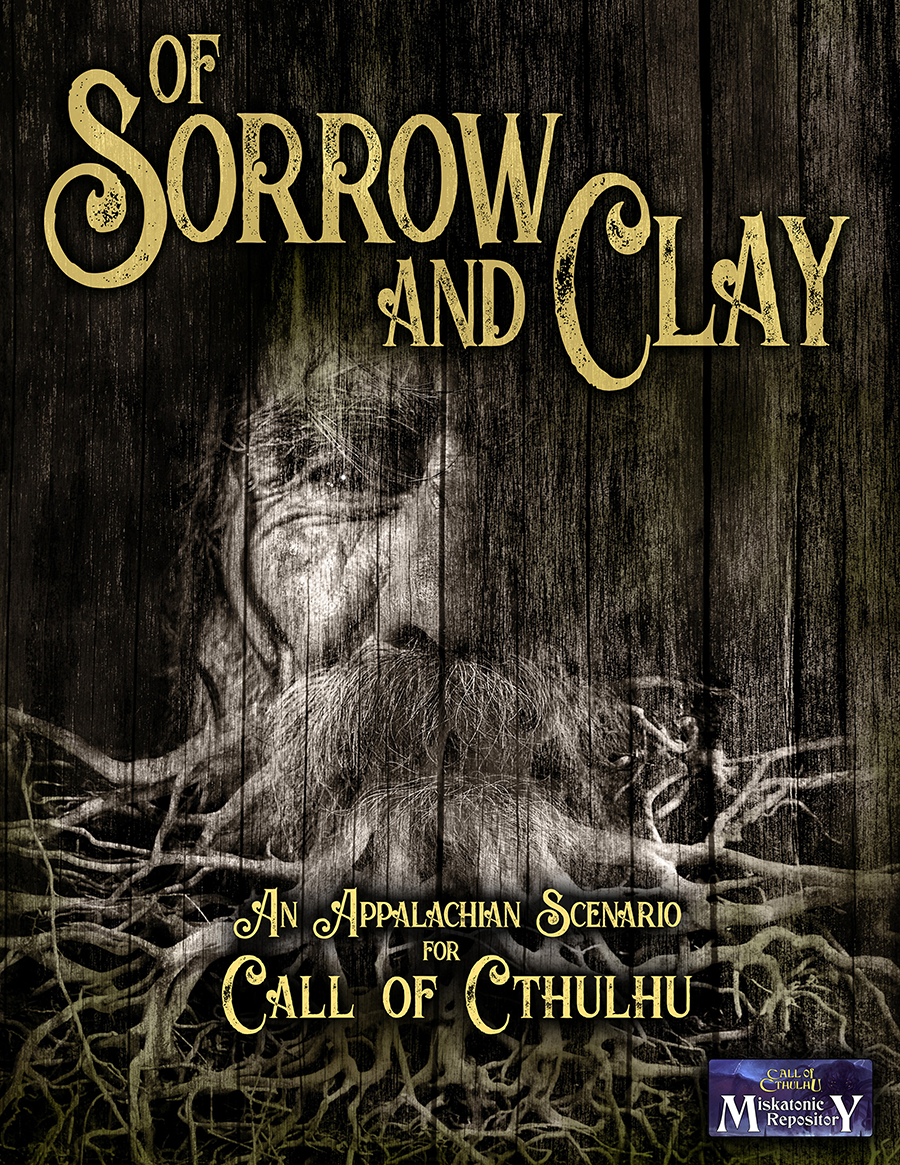 Family is everything in the Appalachian Mountains. When everyone else turns their backs, they will be there, waiting. They may not like you. They may even hate you. But there is a loyalty to blood that runs deep in those black soiled hollers.

Of Sorrow & Clay delves deep into the history of an old Moonshiner, Carson Taft, and his family. At the ripe old age of 89 he has gone missing is the deep forests of James Holler in Kentucky. Telling his neighor Jack, that he is going to see his first wife Sadie who disappeared some 45 years earlier and never found. Carson himself is now missing a good few days now, and Jack has gathering the Carson's family and friends to help search the dark woods in hopes to find the old fool.

Created for a one-shot special mini series presented and run by Ain't Slayed Nobody, with Cam Collins from The Old Gods of Appalachia and Becca Scott from The Calyx as guest players. Written by Graeme Patrick winner of Chaosium's 2019 Cult of Chaos writers competition. Here's the first episode: