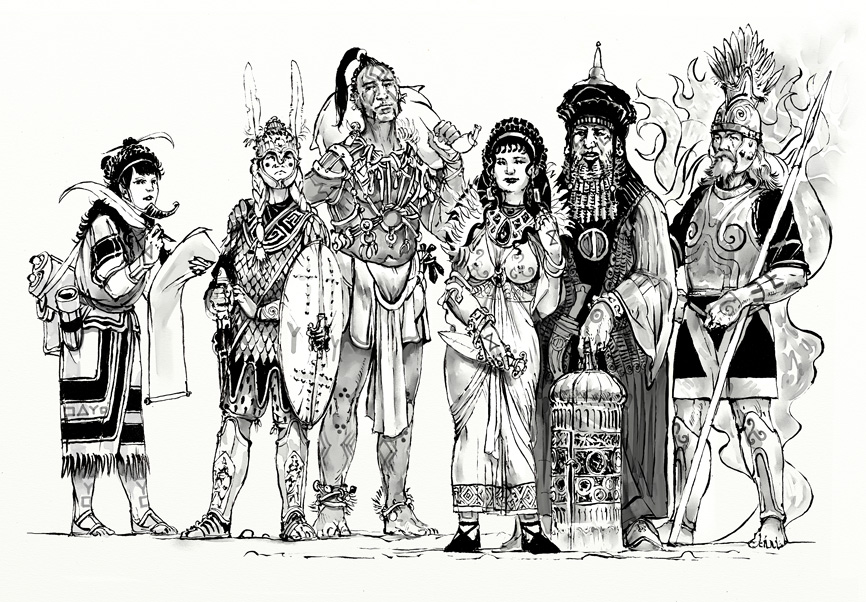 Jumping into the setting with Family Background

As talked about in the previous designer notes, I'm not a big fan of the "zeroes to heroes" trope. I prefer playing and gamemastering characters who start in media res - that is, they already have a past and have community ties, loyalties, and other passions, which can be used as roleplaying and campaign hooks.

This approach however creates two problems:

To solve these problems, we've adopted the "Family History" mechanics from Pendragon and tailored it to Dragon Pass. It is quite reminiscent of the clan history process from the King of Dragon Pass computer game, except it develops your character, rather than your community!

In character creation, you can decide which grandparent had the most impact on your character's identity, and then determine what happened to him or her until 1606. Each of these end up being homeland specific, with different outcomes depending on whether the grandparent was from Sartar, Esrolia, Lunar Tarsh, Old Tarsh, the Grazelands, or Prax. Did your grandmother fight at the Battle of Grizzly Peak or plunder Boldhome in 1602? Was your grandfather killed when Belintar raised the Building Wall or did he follow Fazzur Wideread and fight in the Feint to the Sea?

After 1606, you can "retire" your grandparent, and move on to whichever parent most influenced your character. Did your father help the Lunars conquer Prax or did he participate in Starbrow's Rebellion? Was your mother killed by Harrek Berserk in 1616 or by Greymane's raiders the following year or by elf raiders? Did your parent die in the Great Winter making sure you were fed? And so on.

Your character may gain passions or even skill bonuses as a result of the deeds of your ancestors.

Finally in 1624, you may "retire" your parent, and determine what happened to your character prior to the start of play. Your character can't get killed as a result of their participation in the early Hero Wars (although they might have nearly died and gotten a distinctive scar), but it really helps ground your character in the setting. Did you fight in the Siege of Nochet or at the Battle of Pennel Ford? Did you witness the Dragonrise, the betrayal of General Fazzur Wideread or fight at the Second Battle of Moonbroth? Did you survive a murder attempt by supporters of King Pharandos or were you grievously wounded when Jar-eel appeared in the middle of Kallyr's Starbrow heroquest.

For the player (this was created by one of my playtest players who was not very familar with Gloranthan lore), she immediately "got" got the character after doing this - and all before determining any other stats. She knew who she was playing, who her character's most important loyalties were, etc. She knew her character really hates the Lunar Empire with an overwhelming passion and is also a strong Sartar nationalist. She's also as loyal to Argrath personally as she is to her tribe - and more so than she loves her own family or clan! Finally, her character's extremely high honor means her demand for honor is going to drive her behavior whenever applicable - she'll keep her word even unto death, but also react extremely towards dishonorable actions!

Another player in the same group decided her character would be Ferenasa's half-sister. Same mother, different father and different influential grandparent. Although her events were linked, she ended up with a very different character:

Again, the player knew after this process what kind of character she wanted to play - and knows how her character fits with the other character. Yanioth is driven by her devotion to her goddess and her loyalty to her family and tribe. She has loyalties - possibly conflicting - towards many of the key players in the Hero Wars.

This process takes about thirty minutes to an hour - depending on how much detail the GM and the player wants to go through, but by the end, the player is well-grounded in the Gloranthan setting, and their character is tightly tied into that setting. The Family History not only makes it far easier for the players to jump into the setting - but for the GM, it creates a set of potential campaign twists, where these passions could be put in conflict, offering game possibilities and opportunities for roleplaying. 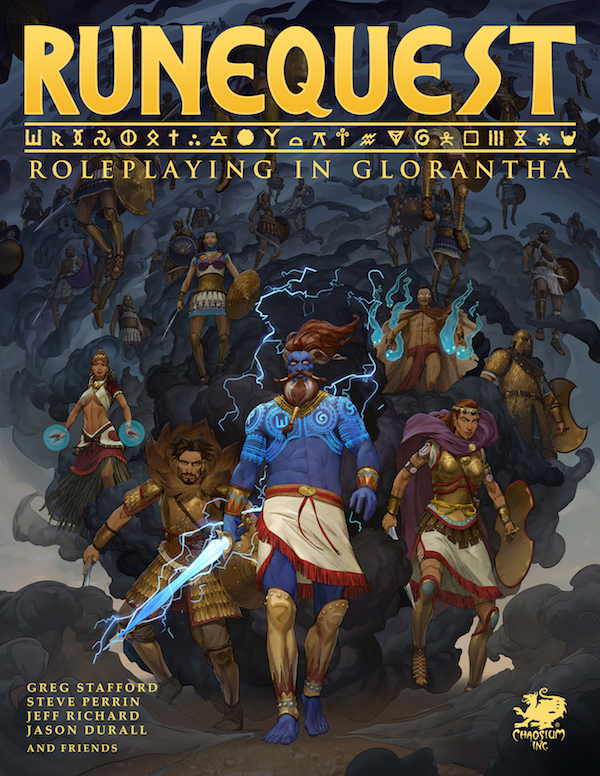 RuneQuest: Roleplaying in Glorantha is out now in PDF!